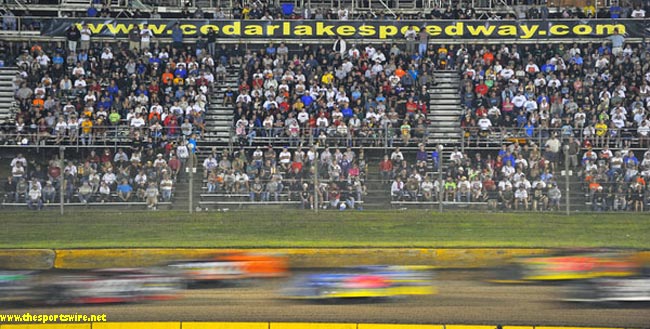 CONCORD, NC – Nov. 20, 2012 – On Nov. 4 the management of Cedar Lake Speedway in New Richmond, Wis., was announced as the recipient of the 2012 World of Outlaws Late Model Series Promoter of the Year Award.

Two weeks later, Cedar Lake’s quartet of co-owners – brothers Chuck, Steve and Bob Kaufman and Brad Both – continue to show what a worthy selection they were.

The presenters of the prestigious USA Nationals – the richest race on the WoO LMS schedule for the last three years – are making the 26th annual edition of the summertime spectacular an all-World of Outlaws weekend. The 2013 USA Nationals on Aug. 1-3 will kick off on Thursday night with a full WoO LMS points program topped by a $6,000-to-win A-Main, track and series officials announced on Monday.

The new-look USA Nationals preliminary-night card will lead into the main event’s traditional two-day format, which includes time trials, heat races and a dash on Friday night (Aug. 2) and last-chance events and the $50,000-to-win 100-lapper on Saturday evening (Aug. 3).

“The Thursday portion of the USA Nationals has taken many different forms over the years,” said Cedar Lake Speedway’s Bob Kaufman. “It’s been an unsanctioned show, it’s been a WRDL-sanctioned show when that series existed and for the past two years it’s been a Cornbelt Clash event.

The milestone 25th annual USA Nationals earlier this year was an absolute blockbuster, further establishing it as a can’t-miss crown-jewel dirt Late Model event and prompting WoO LMS officials to bestow upon its overseers the circuit’s coveted top-promoter honor.

“This year was certainly one of the top Nationals alltime,” said Bob Kaufman. “It was definitely helpful that we had perfect weather, but I think the other part of it is that the event has really become known as one where you know, if you’re driving from someplace and gonna spend a lot of time in the car to get to Cedar Lake, you’re gonna see a top quality dirt Late Model event every time.

“From the competitors that show up to the racetrack preparation to the overall atmosphere of the event, it’s one that every fan wants to make sure they attend at least once in their lifetime. We’re proud to be part of an event that means so much to so many people and very honored that the World of Outlaws have recognized all of us at Cedar Lake Speedway for our roles in making it happen.”

Cedar Lake’s promoters just completed their 12th season as the helm of the high-banked, three-eighths-mile oval. The Kaufman brothers – Chuck, 56; Steve, 44; and Bob, 41 – purchased the facility in 2001 with Both, 46, and then fifth-partner Ron Bernhagen and have steadily built it into one of the country’s top short tracks.

Surprisingly, the group had no background in motorsports promotion when they took over CLS. But their ‘outsider’ status has undoubtedly helped them bring new, fresh ideas to the dirt-track game, including many that are on display during each USA Nationals weekend.

“The first race I ever attended in my life was when I owned the speedway,” admitted Bob Kaufman. “I had never seen a dirt race at any track – not one. I didn’t grow up a race fan. My father owned an auto repair shop so I was a car guy in that way and the same with my brothers, but we weren’t a racing family by any means.

“The opportunity to own a racetrack just kind of fell upon us, and eventually I just fell in love with the business model. I’m a business guy – I have a master’s (degree) in finance, I work at U.S. Bank and I own a couple other businesses (a real-estate investment company and a hockey training center) – and I think that having a business background serves us well. To this day, although I’ve grown to enjoy racing, there’s still many other things I would rather do than go to a race, so really, I think a lot like the people we’re trying to attract.

“To grow our business, we can’t just rely on the (racing) diehards because there are less of them out there these days,” he added. “I gotta figure out how to attract people like me. You need to fill the seats with the people who aren’t necessarily going to a race every weekend but rather chose two or three top ones to attend each year.”

The USA Nationals has become one of those must-see shows, a truly special event that draws a diverse crowd of racing enthusiasts and casual fans seeking entertainment. Beyond some of the most intense dirt-track racing on display anywhere, Cedar Lake’s marquee weekend includes such fan-friendly, atmosphere-building attractions as Friday-night fireworks, a bustling souvenir area, post-race parties and dramatic pre-race pageantry that features cars rolling onto the track illuminated by only a spotlight as fans wave colorfully-blinking light-up toys in the stands and music blares over the p.a. system.

Bob Kaufman collaborates with his brothers Chuck (an employee at the Allina health-care company) and Steve (the only fulltimer at the speedway) as well as Both, who works at the Ameriprise financial-advisory firm, and other CLS staffers to ensure fans get their money’s worth when they buy a ticket.

“Our feeling on it is, if the event is just a race, it’s not very exciting to us,” said Bob Kaufman. “For some, racing might be all they need and want. But we think, especially with the new generation, that people are expecting more – you can’t just go to a race and expect to see four hours of racing and that’s all.

“I think the racing community as a whole is facing a challenge of the sport’s core fans aging. We have to make the younger generation want to come to Cedar Lake Speedway, and I’m happy to tell you that the average age of the fan at our events is younger than it was 12 years ago. That’s a positive thing for our business, and it’s the way the racing community needs to go if it’s going to continue to be successful.

“We think it’s critical to offer people entertainment and we work hard at it, especially with the Nationals,” he concluded. “The Nationals was already a good event when we bought the track, but each year we’ve tried to add at least one piece of entertainment to make it more of an event that everybody really, really enjoys.”

Kaufman and Co. will press on with their quest to make the USA Nationals dirt Late Model racing’s most memorable weekend of the season – and Cedar Lake Speedway a success for years to come.

“This is kind of a passion for us all,” said Bob Kaufman. “We enjoy the challenge of the business – and the racing industry in certainly unique in the challenges that it presents. I always tell people that owning a racetrack is one of the most difficult things because it’s like a bunch of different companies all in one. You’re an entertainment venue, you’re a restaurant, you’re a retailer, you’re a real estate company, there’s plenty of legal issues to deal with – you kind of got multiple things under one umbrella, and we kind of like that part of it.”

Tickets for the 2013 USA Nationals are already on sale and can be purchased on-line at www.cedarlakespeedway.com or by calling the track office at 612-363-0479.

The USA Nationals is one of several 2013 WoO LMS dates that have already been released, joining season-opening events at Screven Motor Speedway in Sylvania, Ga. (Feb. 8-9), Bubba Raceway Park in Ocala, Fla. (Feb. 15-17) and Volusia Speedway Park in Barberville, Fla. (Feb. 21-23); the Firecracker 100 on June 27-29 at Lernerville Speedway in Sarver, Pa.; and the PEAK Motor Oil World of Outlaws World Finals Presented by NAPA Auto Parts on Nov. 7-9 at The Dirt Track at Charlotte in Concord, N.C. The complete 2013 WoO LMS schedule is expected to be released in the coming weeks.