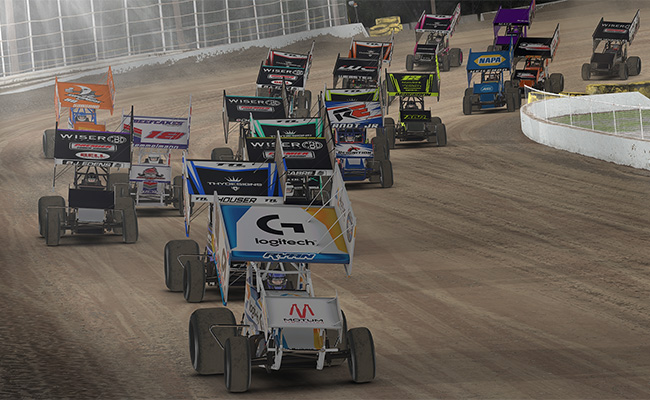 Defending iRacing World of Outlaws NOS Energy Drink Sprint Car World Champion Tim Ryan finally returned to the top step of the podium in Monday night’s race from Volusia Speedway, as the 2019 championship hit its halfway point. The Australian driver, who suffered from an incredible run of bad luck to start the season, finally put together a perfect weekend, qualifying first, winning his heat, and holding off championship leader Alex Bergeron to take his first win of the 10-race championship.

“I think I’ve always had the pace, but I’ve just had a bit of bad luck this season, not executing to the best of my ability,” Ryan admitted after taking home the victory and a $300 bonus. “But tonight, obviously we just got the job done. Qualifying was a bit scrappy, so I was surprised to be on the pole, but then the heat race was comfortable on the bottom.

“In Limaland, I did a lot of practice, but had a wheel failure in qualifying, and that’s why I never did a qualifying lap there. Then I’ve been caught in a bunch of racing incidents. So I just got lucky a bit this week!”

Ryan wrangled the pole away from TTL eSports’ Dylan Houser in the final seconds of qualifying, and immediately set out to take an easy heat victory, his first of the season for Logitech G Altus eSports. Houser, Cole Cabre, and James Edens would score the remaining heat victories, as a rare mistake from Bergeron in the third heat race would drop him back to third in the final running order and put him 11th on the grid for the 30-lap main event. Braden Eyler and Joel Berkley would win a pair of rowdy last chance qualifiers to help set the final 20-car grid.

In the main event, Ryan pounced on the lead over Houser early, while Bergeron made quick work of seven drivers in just two laps to climb to fourth, and got past Lewis Hewett on lap 11 to crack the podium. Shortly after, Nelson Webster’s contact with Austen Semmelmann led to the only caution of the race, bunching up the field and giving Bergeron a crack at the top two drivers.

Houser was no match for Bergeron, as the Canadian made the pass for second not long after the restart to begin working on Ryan. While Houser slid through the field to eventually finish seventh, Bergeron pressured Ryan dramatically through the second half of the race, calling back to last year’s intense championship battle between the duo that ended with a four-point victory for the Australian. In the end, just .405 second separated the duo, with Hewett taking the final podium spot after turning some of the fastest laps of the race from the top line.

“I just ran the bottom, trying to run down the leaders, and we almost had a chance there,” Bergeron said of his late-race battle. “But the bottom completely went away, and I just couldn’t make the car stick down there. Tim just ran the middle, and I couldn’t run the same line he does—you can’t pass that way. I tried something and it didn’t work out, so we grabbed second tonight.”

“After that first caution, it all changed,” Hewett added. “David (Heileman) and Joel turned up from the back, and Alex was there from mid-pack as well. It was a lot different from the start! I thought I had a chance to track (Ryan and Bergeron) down—the top was comfortable in Turns 1 and 2, I could sit up there all race, but 3 and 4 were just really difficult. You had to drift right up to the wall, and there’s a big cushion that grabs the car and throws you around down the straights. I was making it hard for myself with that!”

At the halfway point of the season, Bergeron now boasts a 62-point lead over Knoxville winner Edens and multiple podium finisher Heileman. Bergeron has yet to miss a podium so far in 2019, and his three victories in the first five rounds of the championship have already nearly equaled his 2018 win count of four.

With the first repeat track of the season in Volusia now under their belt, the 35 drivers of the iRacing World of Outlaws NOS Energy Drink Sprint Car World Championship will prepare for Kokomo Speedway, one of only two tracks to appear on the 2019 calendar just once, next Monday, April 29. As always, the race can be streamed live at 9PM ET on the iRacing eSports Network on Twitch, YouTube, and Facebook.