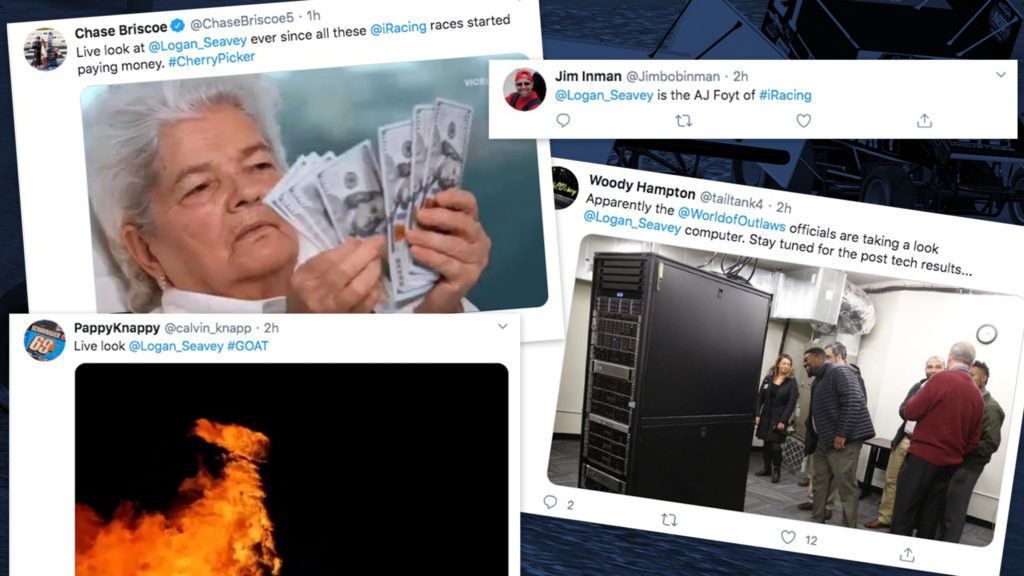 CONCORD, NC — Logan Seavey continues to prove he’s the real deal in a virtual world, collecting his third victory in four days in his third different type of car when he won the exciting World of Outlaws NOS Energy Drink iRacing Invitational from Knoxville Raceway that was simulcast on DIRTVision and Facebook.

Seavey, a popular open-wheel racer, has been making a name for himself in iRacing events, too, headed into Wednesday night’s World of Outlaws iRacing Invitational at 8 pm on Fox Sports’ FS1 Network with Jeff Gordon and Clint Bowyer providing commentary, the World of Outlaws own Johnny Gibson calling the action and host Adam Alexander as ringleader.

As for Tuesday night’s event, well, social media is catching on to Seavey’s recent success …

Live look at @Logan_Seavey ever since all these @iRacing races started paying money. #CherryPicker pic.twitter.com/GhqnSuFYPO

The legend @Logan_Seavey when i was lucky enough to know him before he was a @iRacing hero. pic.twitter.com/Dk2znPRW4T

@Logan_Seavey is the AJ Foyt of #iRacing

While Seavey was trying to hold off the field, there was plenty of action behind him…

Not the night we wanted. I screwed and got in another car early on in the race. Got into a racing deal wreck on the last lap with @KyleLarsonRacin and finished in the back. Try again tomorrow night on @FS1 #WoOiRacing #RacingTogether https://t.co/ME09Y94R7a

Not fast enough on this thing yet but I’ll keep trying until we get back in the real thing. Definitely having more fun at building the sim rig though, maybe it will be done by next weeks races. Bring on a bullring 😜🏁

Missed the main tonight at @iRacing @knoxvilleraces but a lot of fun as always. These events are awesome!Thank you for having me! Onto the next one. #WoOiRacing #RaceTogether

@alyssajo_mccarl reminding me how to run the bottom at @knoxvilleraces tonight. Looking forward to @FS1 with the @WorldofOutlaws tomorrow night! pic.twitter.com/e0ek0tT4cA

Im no sprint car driver, but glad to put on a show for the @WorldofOutlaws #DCAlmost

Ultimately it was the fans who had the most fun, watching the race on DIRTVision as well as on Facebook, courtesy of NOS Energy Drink …

@dirtvision Fun .@iRacing action with the .@WorldofOutlaws and other racers from virtual .@knoxvilleraces! Obviously not as good as the real stuff, but fun nevertheless! Thanks for the entertainment guys and gals!🏁🏁🏁🏁 .@Gibvoice .@RossWece 🏁🏁🏁🏁🏁🏁🏁🏁🏁🏁🏁🏁🏁 pic.twitter.com/PhJircFbme

Ready to play in the dirt tomorrow night when I make my @WorldofOutlaws debut at the virtual Knoxville Raceway in this awesome @Snapon_Tools sprint car. Tune in at 8 pm ET on @FS1 because you don’t want to miss us #RacingTogether #WoOiRacing pic.twitter.com/uM6DET3t8m

This kid, @Logan_Seavey is on a roll… See if his hot streak continues tomorrow night at 8:00 on @fS1. @WorldofOutlaws https://t.co/bgiIFzEiQJ

Putting in some laps earlier today as we prepare for tomorrow’s @WorldofOutlaws @iRacing event which will be LIVE broadcast on @FOXSports @FS1 at 8 PM EST. Catch me in the 0M @TeamDrydene @SBR_TeamZero ride. #WoOiRacing #RacingTogether pic.twitter.com/B2Xn5x7DeE

NEWS: The @WorldofOutlaws have earned a repeat engagement on @FS1, with the World of Outlaws @iRacing Invitational returning to TV screens across America this coming Wednesday night –> https://t.co/wWVCWuJOtb