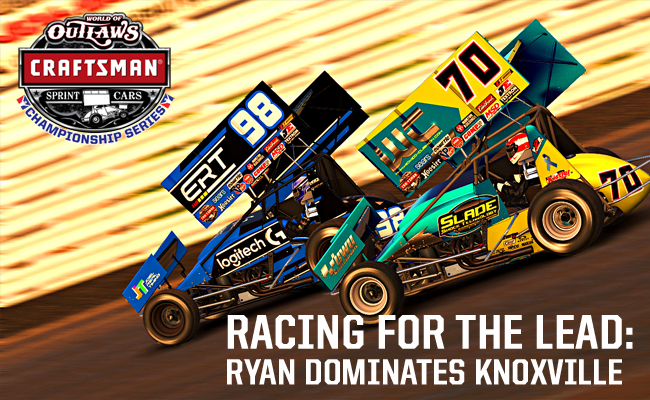 iRACING — June 25, 2018 — The fourth round of the World Of Outlaws Craftsman Championship Sprint Car Series featured the Sprint Car Capital of the World: Knoxville Raceway. The action last night did not disappoint.

Quick time went to points leader Tim Ryan. He continues to put up consistently strong qualifying runs this season and held on to win the first Heat as well.

The track started to slicken up for Heat 2 and that is where drama started unfolding. Chris Brenner started showing fantastic race pace moving up 2 spots to beat out Cameron Dance, with Weston Newell making contact with Justin Thomas which put Justin at the back of the B Main.

Heat 3 had some drama. Matt McKinney got out in front early and held it, but David Heileman and Anthony LoPresto came from deep in the order to transfer. Rusty Kruger and Alex Bergeron made contact and would finish in 8th and 9th making life very difficult for the pair of them.

By the time the feature rolled around a slick track moved most people up to the top, though the lower lines seemed viable. Tim Ryan and Chris Brenner were the class of the field for all 30 laps. Tim would get the advantage on starts and restarts, but Chris was the only person capable of keeping pace with him.

Unfortunately runs would never last long enough for the #70 to get an opportunity. Every time he got close, a caution would fly. Each restart gave the advantage back to Ryan who would immediately reopen the gap. AJ Neben and Michael Sheridan made good rebounds to get to the top 10. Howard Weaver held onto P7 and 2nd in points, Anthony LoPresto moved up 6 spots in the feature, and David Heileman held onto third after battling the whole main with Cameron Dance. One driver on the wrong side of luck was Alex Bergeron. The only bit of luck he got all evening was squeaking through to the feature after wrecking in the heat, but drama would find him again. Bergeron finished in 18th dropping him to 3rd in points.

Next Monday the Late Models will have their go at Knoxville, a combination that always puts on a show and the Sprint Cars return July 9th for their second stop at Eldora. Be sure to catch both of those races on iRacing Live and on DIRTVision at 9PM Eastern presented by Racespot TV.