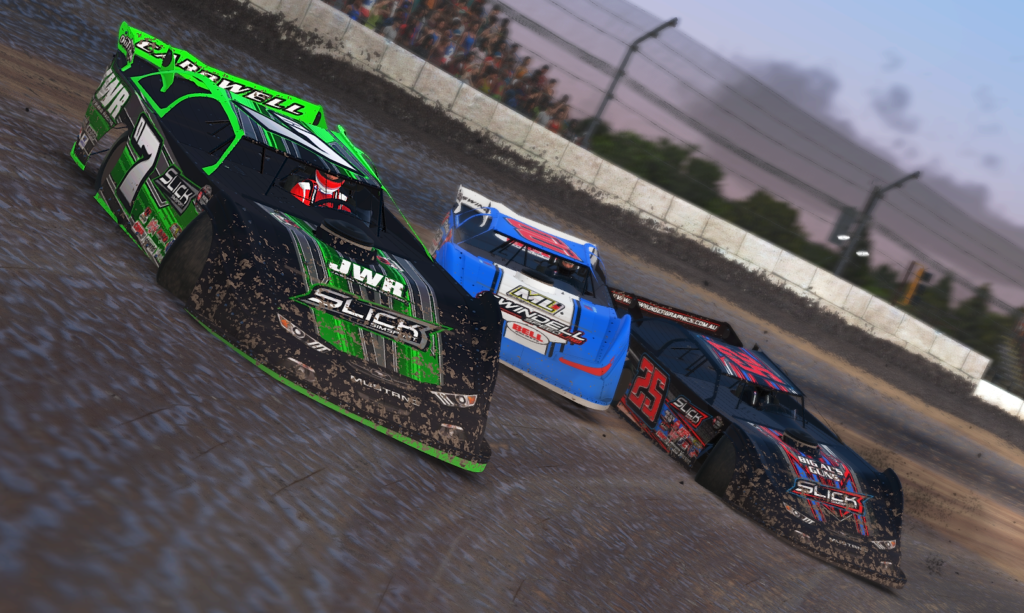 On a night with major championship implications, Hayden Cardwell rose to the occasion—and Kendal Tucker’s quest for the winner’s circle will have to wait another week.

Cardwell scored his series-leading third victory of the 2020 iRacing World of Outlaws Morton Buildings Late Model World Championship at Fairbury American Legion Speedway on Monday night, denying Tucker his long-awaited first series victory after getting a huge run from the bottom in the second half of the race. The win enabled Cardwell to return to the top of the championship standings with just three races remaining.

Three drivers entered the night within 14 points of one another in the standings, with rookie Dylan Wilson and veteran Evan Seay sandwiching Cardwell in the points. Wilson’s consistent season continued with a respectable sixth place finish, but Seay’s championship hopes took a major blow when contact with Tyler Ducharme sent him into the wall and upside down. It was one of four cautions on the night, as the relatively clean racing of past quarter-mile rounds at Limaland Motorsports Park and even last week at Kokomo Speedway gave way to a much more rough-and-tumble night at Fairbury.

The result is a tighter battle for the points lead, but one fewer car within its sights. Cardwell regained the top spot from Wilson with the win, but has just a five-point cushion. Seay is now 50 points out of the lead and 45 behind Wilson, with Tucker and Devon Morgan now within range of catching him thanks to consistent results all year long.

Coming off a win in the first heat race, Zack McSwain scored his first podium finish of the season in third, while defending series champion Blake Matjoulis and fellow heat winner Blake Cannon completed the top five. Steven Wilson and Alex Bergeron took the last chance qualifiers, but neither were able to crack the top 10 in the feature, with Bergeron’s 11th place run falling just short of the feat. Only three drivers—Seay, Casey Kirwan, and Brandyn Proudfoot—failed to complete all 50 laps of the main event.

The final stretch of the iRacing World of Outlaws Morton Buildings Late Model World Championship sees the series visit three consecutive half-mile tracks, starting next Monday at the legendary Knoxville Raceway. As always, the race can be seen live at 9PM ET on the iRacing Facebook, Twitch, and YouTube. For more information on iRacing and for special offers, visit www.iracing.com.