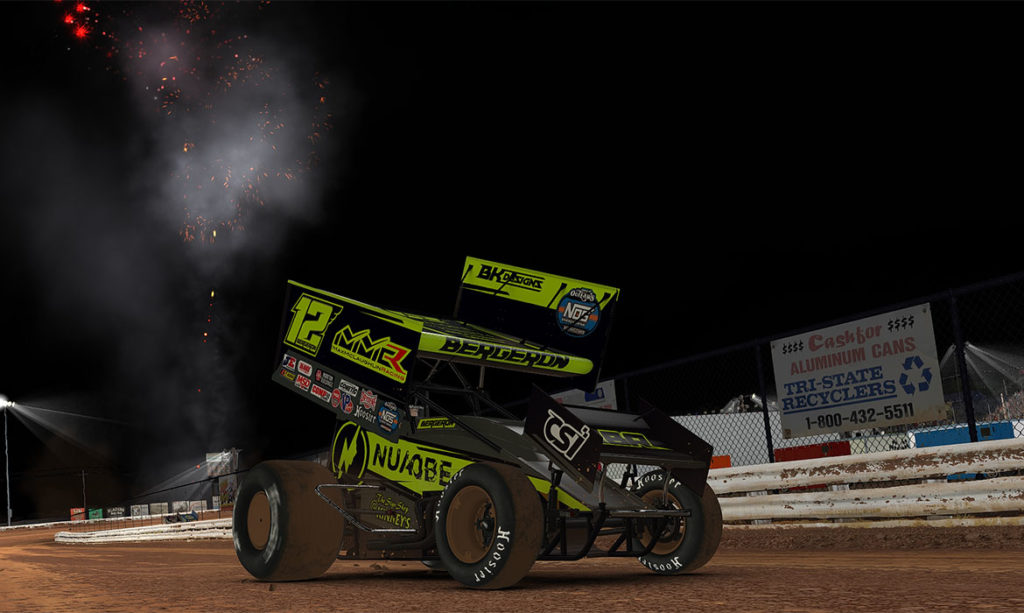 Alex Bergeron held off a furious late-race charge from David Heileman to score his fourth victory of the 2019 iRacing World of Outlaws NOS Energy Sprint Car World Championship season from Williams Grove Speedway on Monday night. Despite taking on one of the longest tracks of the season, 30 laps weren’t quite enough for Heileman to track Bergeron down, as the Quebec native hung on for the victory by .530 seconds at the checkered flag.

“The track was very racy—the top got faster during the midway point of the race,” Bergeron said. “We had a good night overall. We qualified with the fast time and won the heat race. We started off pretty good and had a close battle with James Edens, that was awesome to run with him. We pulled away at the bottom, and at the end I was trying to run the top, but Heileman was catching us so fast that I just took it easy and made sure we finished the race. We’re battling for the championship, so we need to make sure we finish our races.

As has happened multiple times this season, Bergeron scored the pole and won the first heat, but a number of other drivers kept things interesting in the other heats. James Edens found his way around Alex Smolders to win the second heat, Austen Semmelmann held off Heileman to win the third, and Chase Cabre withstood heavy pressure from Vinnie Sansone to win the fourth. Braden Eyler and Joel Berkley advanced through the first last chance qualifier, while Logan Clampitt and Joe Lusk came out of the battle in the second.

The final began with the top three drivers carrying on in order, as Bergeron held court up front with Edens and Semmelmann chasing. They held those spots through more than half of the race, with separate cautions for Nick Cooper and Cole Cabre threatening to shake up the field but not forcing immediate position changes among the top three.

But after the second restart, Heileman began to run the top line and began picking off cars. He cleared Semmelmann on lap 20 and a slower Edens on the next lap, and began working on Bergeron. Heileman sliced the deficit at first before Bergeron drifted to the top line and regained the lost time, but in the race’s final laps Heileman found a power surge and began cutting the deficit even further. The newfound pace was enough to fill Bergeron’s mirrors, but not quite enough to set up a pass.

“Once I got to James, I thought that I wasn’t catching Alex, so I just tried to save the car,” Heileman admitted. “I went to the bottom a couple of times and made sure I didn’t hit the wall. We’re always moving forward, we’re just not starting from the right place. James did what he was supposed to do—from third he won his heat race, and I had a great battle with Austen in mine. We would’ve been able to start third, but we just weren’t able to do that.”

“Early on, there was a lot of moisture on the track, and you could run pretty much anywhere,” Edens added. “I think we just found the middle there in 1 and 2, but at the end of the night we were way too loose. That’s why we were so good early on, but at just about halfway there it completely went away from us.”

Only two races remain in the 2019 iRacing World of Outlaws NOS Energy Sprint Car World Championship: The Dirt Track at Charlotte Motor Speedway next week, and Knoxville Raceway in two weeks’ time. With a 74-point championship advantage going into Charlotte, Bergeron will look to wrap up the title a round early at the final new track of the season. As always, races can be streamed on Monday nights on the iRacing eSports Network on Facebook, Twitch, and YouTube.