SWEET RE-OPENING: I-70 Comes Back to Life as Sweet Soars to Seventh Win 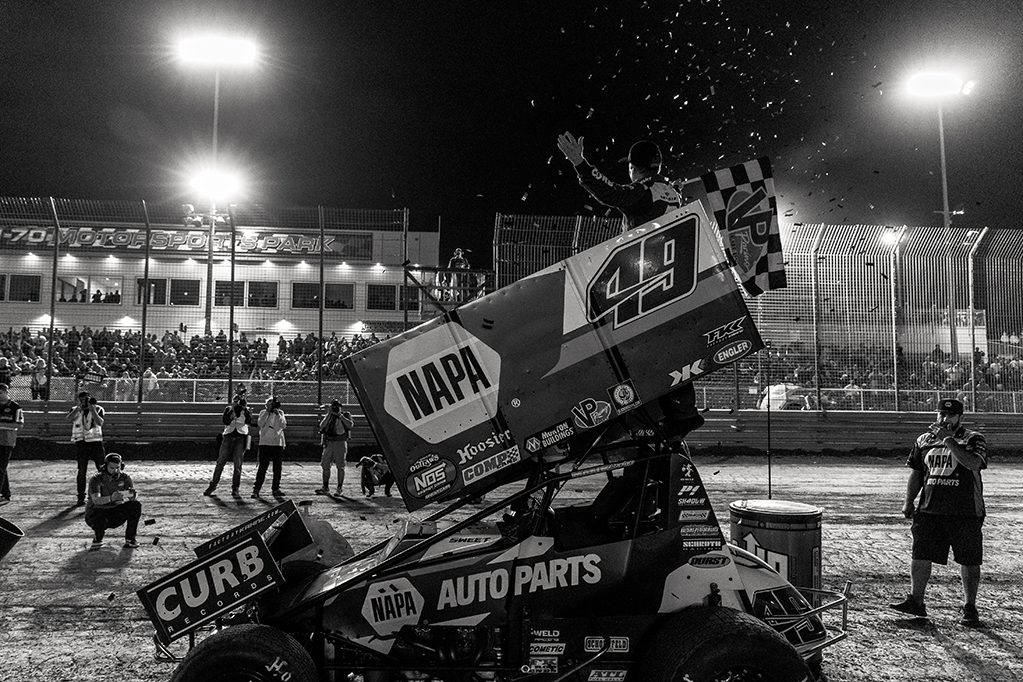 Odessa’s I-70 Motorsports Park was rundown, overgrown, and left for dead. The once blossoming facility was a lost cause, only until it wasn’t. After years of extensive hard work, the iconic Missouri track officially returned on Friday night with the grand re-opening welcoming the World of Outlaws NOS Energy Drink Sprint Cars to town for the first time since 1986.

The first of two nights at the FVP Platinum Battery Showdown, fans came out in full force to support the return of the revamped I-70. They were rewarded with a racey 30-lap feature that included three different leaders and a familiar face in victory lane.

At the end of it all, an extra-excited Brad Sweet climbed from his Kasey Kahne Racing, NAPA Auto Parts #49 as the winner of the spectacular return to racing at the 4/10-mile oval. The Big Cat’s path to victory lane came from the fifth row as he soared by early leaders Brock Zearfoss and David Gravel to pounce on the $10,000 W.

The Grass Valley, CA native picked up his 65th career victory and his seventh win through the first 17 races of the season by virtue of his triumph in Friday’s Feature.

“This NAPA Auto Parts team never gives up,” an elated Sweet said. “We know sometimes you’ll have to come from mid-pack, and others you’ll start on the front row. It’s always a little more sweeter doing it from farther back. We’ve struggled on the half-miles this year, so that’s a nice bonus too. This was a pretty cool place for my first trip here. Awesome crowd, great race track, incredible facility. Excited for tomorrow.”

From the jump, Zearfoss of Jonestown, PA put his #3Z to the point and led his first laps of the 2021 season. His command lasted 10 laps in total, until a Lap 11 restart following Mason Daniel’s flip allowed Gravel to line up alongside him and steal the lead away.

Gravel set the cruise control on his Big Game Motorsports #2, but behind him was a hard-charging Brad Sweet who rallied from ninth and was up to second by Lap 20. Once he disposed of Zearfoss, Sweet’s markers were on Gravel and he was closing quickly. Using a lap car as a pick, Sweet went low down the backstretch and took them three-wide as he pinned the bottom of turn three to surprise Gravel and rip the led away on Lap 24.

The duo continued to wage war over the final laps until a shocking caution flew on Lap 27 for third-running Zearfoss hard into the turn four wall. That set the stage for the final restart with only three laps remaining.

Going back to green, Brian Brown of Grain Valley, MO made a surprise entrance and slid by Gravel as his hometown crowd cheered him. Brownie wasn’t done there as he threw a Hail Mary effort at Sweet for the victory on the final lap, but feel short by only 0.440-seconds as Sweet’s #49 collected the checkered flag.

It wasn’t the win he wanted, but this season-best second-place finish for Brian Brown was extra special. Not only did it come at his home track in their grand re-opening, but it also came on the first night of the FVP Platinum Battery Showdown, sponsored by one of his greatest supporters in FVP Parts.

“I grew up 15 minutes that way in Higginsville and now I live 15 minutes this way in Grain Valley, so I see a lot of familiar faces tonight,” Brown said to a hyped-up crowd. “I’m so proud to represent mid-Missouri, I’m one of you guys. This FVP Parts #21 is great right now and we’ll be back going for the win tomorrow.”

After leading 13 laps through the midway point, Gravel slipped back to finish third with his fourth consecutive podium finish aboard the Big Game Motorsports #2.

“We had a car to win, but our tires kept going away under those cautions,” Gravel noted. “I thought we would’ve had something in lap traffic. I really didn’t want to see that caution, but hey that’s racing. Brad is on his game, but we’re gonna make it interesting all year.”

Rounding out the top ten at I-70 Motorsports Park on Friday night was Carson Macedo in fourth, Kyle Larson in fifth, James McFadden in sixth, Sheldon Haudenschild in seventh, Giovanni Scelzi in eighth, Rico Abreu in ninth, and Logan Schuchart in tenth.

UP NEXT – The FVP Platinum Battery Showdown concludes at I-70 Motorsports Park on Saturday, May 1 as the World of Outlaws NOS Energy Drink Sprint Car Series cap a triple-header weekend before visiting Eldora Speedway next weekend.