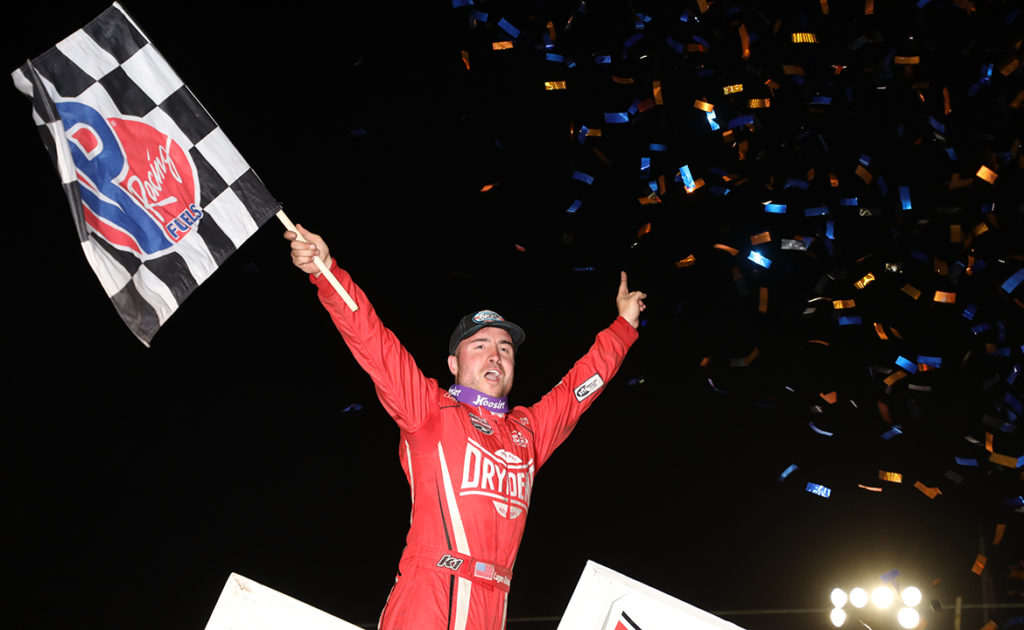 STOCKTON, CA — Blue and orange confetti painted the landscape around Logan Schuchart, who climbed to the top wing of his Shark Racing Sprint Car with the checkered flag in one hand and other pointing to the sky.

Thousands of fans cheered, and the first-time winner this season, Schuchart, cheered with them in Victory Lane at the Stockton Dirt Track.

It was a scene that could have looked much different for Schuchart until about five laps to go in Saturday night’s World of Outlaws NOS Energy Drink Sprint Car Series 30-lap FVP Platinum Battery Showdown.

Shark Racing showed they were the apex predator from the start of the event. Hanover, Pa. native Schuchart was quickest in practice, and backed that up qualifying second behind teammate Jacob Allen. He then won his Heat race and drew the pole for the DIRTVision Fast Pass Dash, which he also won.

At the start of the Feature, Schuchart and Allen dueled side-by-side in front for less than half a lap before Schuchart shot to the lead. Four cautions in the first six laps never allowed him to get into a rhythm, but he maintained the lead each restart.

Lurking behind him, though, was Bixby, Okla., native Shane Stewart — equally as hungry for his first Series win of the season, after finishing outside the top-10 the day prior. When restarting on lap six, Stewart did not let Schuchart out of his sight. With each passing lap he inched closer and closer to the red-and-white Drydene-sponsored #1s.

Coming off of turn four on lap 11, Schuchart, who had kept his car on the high side of the track, hit a rut, about bounced his car completely off the ground and into the wall, and lost the lead to Stewart.

“I was running pretty hard when I was out by myself,” Schuchart said. “That’s what kind of got me in trouble. I almost flipped the thing, bouncing around, jumping up and down.”

He added to stay consistent on the rough track conditions you had to “cowboy up.”

While Stewart began to pull away to close to a half a track lead, Schuchart didn’t lose hope. He knew Stewart would face the same rough conditions running the top side of the track — providing the potential for his own mistake.

But he never made one. Even when navigating lap traffic. Schuchart still didn’t give up hope.

“I knew he was going to have the same issues, he’s going to want to get out front and stand on it,” Schuchart said. “You can count on probably some more yellows, because we were having one right after the other.”

On lap 23, he got one. Kasey Kahne stopped on the front stretch when his right rear tire gave up, with debris left in turn four. When the race went back green, Stewart maintained the point once again. Until a lap later. His paced slowed, and Schuchart shot by Stewart for the lead with Brad Sweet following to surge into second place. Shortly after, Stewart was off the track in turn three with a flat right rear tire.

“They were saying some stuff may have broke off of Kasey’s (Kahne) car when I was trying to get around him, and I must have ran something over,” Stewart said. “Just one of those deals.”

When the race went back green, Schuchart took command of the lead once again and drove his car into Victory Lane, claiming his ninth World of Outlaws win.

“I thought his (Stewart’s) right rear looked a little low, but I’m not going to be the guy running second and tell him his tire is low, but I knew he wasn’t going to give up,” Schuchart said. “I’m just happy for this whole team. It’s very rewarding for all of their hard work to be able to get a win this early in the season.”

Schuchart is the sixth different Series winner this year in seven races. Carson Macedo, who was the fifth different winner this season Friday night at Silver Dollar Speedway pulled off another impressive run finishing seventh after starting 23rd – making him the KSE Hard Charger of the night.

Having as equally of an impressive run was Sheldon Haudenschild, who started 25th using a provisional and finished 10th.

Even though Stewart’s promising night ended with disappointment, he is still leaving with newfound confidence.

“I think we made some big gains throughout the night and learned a lot of stuff,” Stewart said. “We continue to learn. Even Barry (Jackson), you know, he’s been out here a long, long time. But he is dealing with a new driver, so we’re still trying to learn each other. We’re getting better.”

Quietly closing on the two points leaders is Sweet, who finished second two nights in a row – now 10 points behind Pittman.

“Tonight, it took some juevos, you had to get up on the wheel and try to hammer through the holes (in the track),” Sweet said. “Logan did a good job. It was kind of survival there… Two seconds place, we’re knocking on the door (of the points lead).”

While Sweet took his second-place finish with stride, Schuchart basked in the glory of his win in Victory Lane, confetti still floating to the ground and fans still cheering.

“The fans are awesome (in California),” Schuchart said. “They’re very passionate. It’s awesome to win in front of this great crowd.”

As always, you can catch all the World of Outlaws NOS Energy Drink Sprint Car Series action on DIRTVision.com.