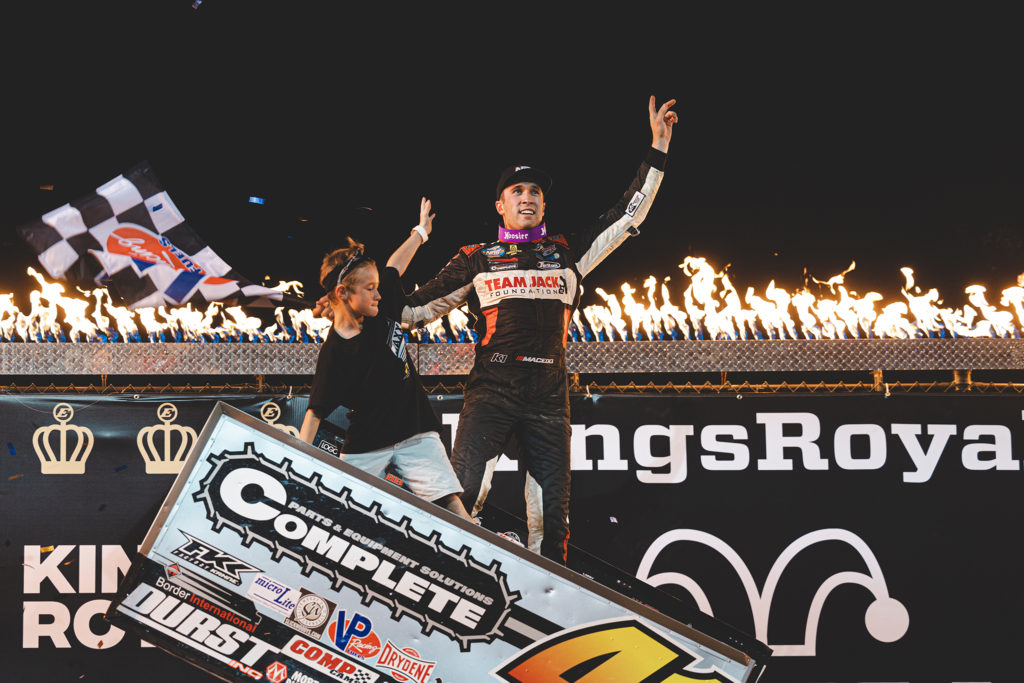 Carson Macedo has created a habit of shining at the biggest venues in Sprint Car racing lately.

The Big E was his latest breakthrough on Wednesday night, dominating the Jokers Wild to earn his first-ever trip to victory lane in Rossburg, OH.

Most impressive in his route of the daunting 1/2-mile was in fact, his opening 1/2-mile of the feature. Starting sixth, Macedo took it four-wide at the flag stand, darted to the bottom of turn one to steal another spot, and then cleared a slide job into turn three to pass five cars and take the lead on the opening lap.

Once into the lead, Macedo set the cruise control and ran off into lap traffic. He encountered several restarts, but nothing could stop the Lemoore, CA native. He survived to score his sixth victory of the season and 12th of his World of Outlaws career.

“It’s a really good time to be quick right now,” Macedo mentioned. “This crew is firing on all cylinders. Philip Dietz is one of the best in the business, and we’ve got Clyde Knipp and Nate Repetz both doing a killer job as well. I told Phil at the beginning of the year that I really wanted a win at Eldora. This is one of my favorite tracks, but I’ve never been able to get it done here until now.”

Macedo’s $10,000 Jokers Wild win came against the largest field (57 cars) of the season for The Greatest Show on Dirt. Even more cars are expected to pile into the pit area tomorrow as the 38th Kings Royal offers a $175,000 payday to the man who wins it all.

On Wednesday, it was all about fine-tuning your equipment with big money on the line come Thursday.

“Our half-mile package is incredible right now,” Macedo spoke on the #41. “Philip does such a great job 0f watching the car and understanding what I need. You have to have a really well balanced car to win at places like this, and we’ve really got our balance figured out right now. I can cut nice, smooth laps without too much effort.”

After starting on the pole position, Brian Brown settled for a second-place finish to kick off the four-night stretch at Eldora. His resurgence comes amid a change in personnel as he brought uncle and National Sprint Car Hall of Famer Danny Lasoski on board to take over Crew Chief duties. The decision has immediately paid off.

“You know I haven’t smiled in awhile,” Brown candidly spoke. “It’s so good to be in contention for a win against these guys. Up front and on TV is where the #21 and our partners belong. This is only night one and I’m pumped. Driver error cost me the lead and let Carson get by, but its awesome to be this good this early here.”

David Gravel rounded out the podium on Wednesday night with a last-lap pass lifting him over Kerry Madsen for the third spot.

“I hurt myself on the start, but the car really came around and came to life at the end,” Gravel noted. “That makes me feel good heading into these next three nights. Tomorrow is a whole different ball game, so we’ll see what kind of hand we’re dealt.”

Kerry Madsen aboard the Tony Stewart/Curb-Agajanian Racing #14 and Aaron Reutzel in the Roth Motorsports #83 closed out the top-five.

UP NEXT: The World of Outlaws NOS Energy Drink Sprint Car Series will be back at Eldora Speedway tomorrow, Thursday, July 15 for the 38th running of the Kings Royal. A unique format awaits The Greatest Show on Dirt with $175,000 going to the winner and the right to be called King.

WHAT TO WATCH FOR: Ironman 55 to Challenge Outlaws This Weekend