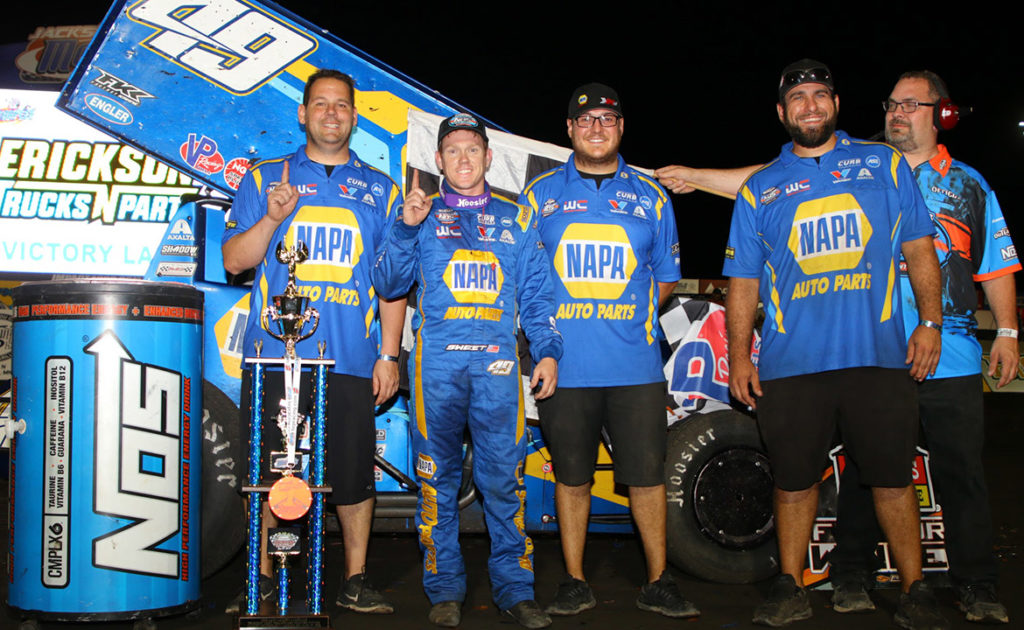 Questions with no clear answers lingered in heads of thousands like a painless headache during the final three laps of the Jackson Nationals opening Thursday night race at the Jackson Motorplex.

Gravel had the 4/10-mile tamed, leading every lap up until that point. But on a charge behind him, the untamable “Big Cat” Sweet.

With two laps to go, they were side by side down the back stretch. Gravel hesitated for a millisecond on a lap car’s trajectory, while Sweet didn’t blink, darting underneath the lap car and Gravel into turn three and claiming the lead off turn four.

From there the answer was clear. Sweet would go on to win his sixth World of Outlaws NOS Energy Drink Sprint Car Series race of the season – his 40th career win and third win in-a-row.

“It’s sure fun to drive this thing right now,” said a jubilant Sweet. “We’ve really hit on some stuff. It’s been a joy to drive good the last few weeks.

“I’m a little worn out, I was really clutching the wheel, trying to hit my marks there late in that race. I knew it was coming down to the white there.”

The win may have been Sweet’s sixth of the season – further extending his title as winningest driver, so far, this year – but it was one of the hardest wins he had to work for.

Starting sixth in the 30-lap Feature, Sweet had a host of competitive cars between he and the lead. Also, on the start, Gravel cruised by Donny Schatz on the outside for the lead and the two pulled away to about a straightaway gap on third-place Brian Brown.

It took Sweet two laps to make his way by Terry McCarl for fifth-place, but it was another nine laps before he caught Brown and Daryn Pittman who were battling for third. He made quick work of the two, passing them both with a daring drive through turn three and four, leaving inches between he and Pittman’s car.

Three laps later Sweet made his way by second-place Schatz and set his sight on closing the half-a-straightaway gap between he and Gravel with 15 laps to go. However, Schatz, who hadn’t won in seven races, was still determined to close that gap himself.

With Sweet getting held up by a lap car in turn four, Schatz throttled back by the NAPA Auto Parts No. 49 car and put his Toco Warranty No. 15 car back in second. Sweet had to regroup and find this rhythm riding the bottom of the track again. Two laps later, with a slide job through turns three and four, Sweet cleared Schatz on the front stretch and reclaimed second-place.

He now had 12 laps to catch the Mesilla Valley Transportation No. 41 of Gravel.

Could he catch him? With three laps to go, Sweet had Gravel in sight. Two laps to go they were side by side. After Sweet darted by Gravel and a lap car in turn three, Gravel had to throw his car sideways on the exit of turn four to avoid hitting another lap car. From there, with one lap to go, Sweet pulled away to a half second lead and a $10,000 victory.

“I was hunkered down and determined to catch him (Gravel),” Sweet said. “It always helps sometimes to be in second, you can watch where he’s not running and try to find a line.”

Carrying the weight of defeat in every word, runner-up Gravel congratulated Sweet on the win, but knew the race should’ve been his.

“We had the race winning car there,” said Gravel, who set Quick Time and won his Drydene Heat race earlier in the night. “That’s not our issue. As a driver I’ve got to put myself in a better spot there. We’ll come back tomorrow hungrier.”

Schatz’s third-place finish was his first podium finish since he won at Nashville Fairgrounds Speedway at the end of May. However, he was still looking for more.

“You slip a little bit, and someone is going to take advantage of it,” Schatz said. “So, it’s one of them nights.”

Sweet has extended his points lead over Schatz, the 10-time Series champion to a 60-point advantage. That stems from Sweet claiming 10 top-five finishes in-a-row and his determination to keep winning.

“When you start winning races you’re just never satisfied unless you’re winning,” Sweet said. “I guess when you get beat down by Donny year after year you just try to keep getting better. I think this year, we’re just a little bit better right now, but that doesn’t mean a whole lot. Everybody’s a half a turn or change or something away from putting the pressure back on us. We’re just ahead right now and that allows me to keep leading laps and winning more race. It just gives me confidence.”

With one more preliminary night of racing at the Jackson Motorplex on Friday, the question of who will win Saturday night’s $41,000-to-win Jackson Nationals finale will linger for the next 48 hours.

However, with a win on night one, Sweet and his Kasey Kahne Racing team have set themselves up to possibly answer that question, as well.

Night two of the Jackson Nationals at the Jackson Motorplex with the World of Outlaws will take place Friday, June 28.