AT A GLANCE: Haudenschild set to backup historic I-55 win

Rarely does a driver have a performance so prodigious that it sets a new level of excellence in the era of Steve Kinser and Donny Schatz dominance.

That triumph was earned by Sheldon Haudenschild when he won the Ironman 55 last year at Federated Auto Parts Raceway at I-55. He crossed the finish line 10.3 sec. ahead of runner-up Schatz, lapped up to fifth place and led 45 of the 55 laps in the caution free race — a feat that still amazes to this day.

With the World of Outlaws NOS Energy Drink Sprint Car Series returning to the 1/3-mile track in Pevely, MO for the Drydene Down Double Invitational May 22-23 — where there are limited tickets still available to each night’s action — the Wooster, OH driver will look to dominate once again.

However, even Haudenschild isn’t sure we’ll ever see a performance like his Ironman run again.

“That’s a night that will probably be hard to ever beat again,” Haudenschild said. “I don’t know. Just the feeling in the car that night was something different. And to get a 55-lap race with no cautions is something unheard of. That one will definitely be hard to replicate again. But all we can do is do our best.”

(RELATED: Watch the Drydene Double Down Invitational on Friday and Saturday on DIRTVision.)

While Haudenschild was putting on one of the best performances in the history of the sport, from inside the car he had no idea.

“Ever since I started racing you have to expect somebody is right on you and is going to pass you,” he said. “That’s how I raced that night. That’s how you have to do it with the Outlaw guys. You never know. There’s a good chance somebody could have been running with me and been there at the end.

“I think I looked at the board one lap and I think that was my one mistake. I won’t do that again. That was a weird night. I didn’t really realize what was going on until I got to the white or the checkered and you start lapping some of them guys you knew you were racing with at the beginning of the race. It was kind of making me wonder.” 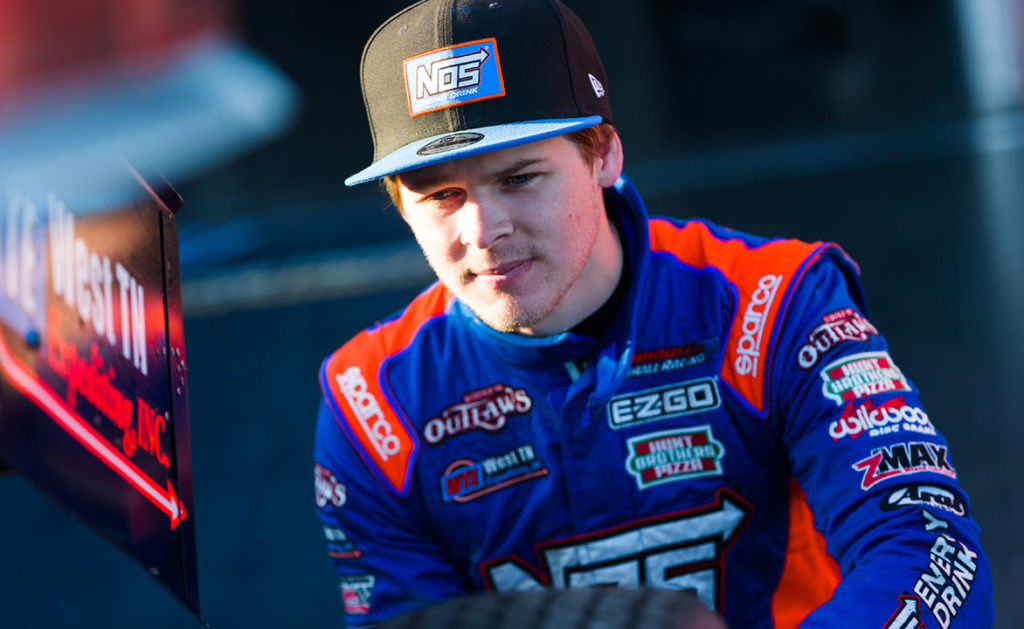 Haudenschild and I-55 have blended well ever since his debut at the track in 2017 with his own #93 car. He started the Feature third and finished third. In his six World of Outlaws starts at the track, he’s finished outside the podium twice.

He’s been watching his past I-55 races to prepare for the upcoming World of Outlaws doubleheader and his Ironman victory isn’t one of them.

“I try not to watch that one actually,” Haudenschild said. “I watch different ones from Pevely. Maybe some older ones. I watched the one from when I ran second (the Friday before the Ironman) probably more than that one. I feel like I passed more cars and it was a little more realistic. I try to watch more common races than that one.”

Haudenschild and his NOS Energy Drink Stenhouse Jr.-Marshall Racing team have had a decent start to the 2020 season. During the three season opening races in February at the DIRTcar Nationals, Haudenschild picked up one top-five and two top-10 finishes. He also earned two KSE Racing Hard Charger awards. Then, after about two months of not racing, he was on his way to a potential top-10 finish at Knoxville Raceway before getting caught up in a wreck when a car blew their tire directly in front of him.

Despite the poor finish, Haudenschild said he still has confidence in his car and team going into Pevely — a trait he said helped him win the Ironman.

“I feel like we had a solid Florida,” Haudenschild said. “Maybe not set the world on fire, but I felt good in the car. That gives me confidence. Same with Knoxville. We might not have started the night well, and it didn’t end well, but we made good laps in the [Last Chance Showdown] and I feel like we could’ve had a top-10 in the Feature. In my mind, I feel like we’re good. Just didn’t have the results we needed. Just move on and look forward to Pevely.”

One change to the team this year that’s already been a benefit to him is the addition of crew chief Kyle Ripper, who he worked with prior to joining SJM Racing. There’s a chemistry between them. Haudenschild already feels it. He said there’s no worries between them. They go to each race and focus on what they have going on.

Even team owner Ricky Stenhouse Jr. sees the potential in the pair.

“I think Sheldon’s communication with Ripper is in a really good spot,” Stenhouse said. “We raced good in Volusia but got to work on our qualifying a little bit. But I thought we went forward. Got a few hard chargers there and raced good. I definitely like our team.”

Going into their third year together this year, Stenhouse added he has seen the 26-year-old Haudenschild grow as a driver during that time. Haudenschild has seen it in himself, too.

“From 2017, when I was in my own car to 2018 when I was with Ricky, I look back and see things and wonder why I did that back then,” Haudenschild said. “It’s all a learning curve. I think that definitely in this sport, the older you get, the more experience you get and the better you get. To me, I think you hit your prime at about 35 years old. I think just growing and learning to work to that point to try and be perfect.”

Right now, whether it’s in a history making performance or not, his expectation is to just win — starting with the doubleheader at I-55 against a star-studded field and $26,000-to-win on the line between the two days.

ABOUT THE TRACK
Federated Auto Parts Raceway at I-55 is a high-banked 1/3-mile track.
Track Record – 10.115 sec. set by Logan Schuchart on Aug. 2, 2019
Online – FederatedAutoPartsRaceway.com

AROUND THE TURN: The World of Outlaws NOS Energy Drink Sprint Car Series on Friday, May 29, and Saturday, May 30, will race at Lake Ozark Speedway, broadcasted live on DIRTVision. The first night will be $6,000-to-win and the second night will be $10,000-to-win.