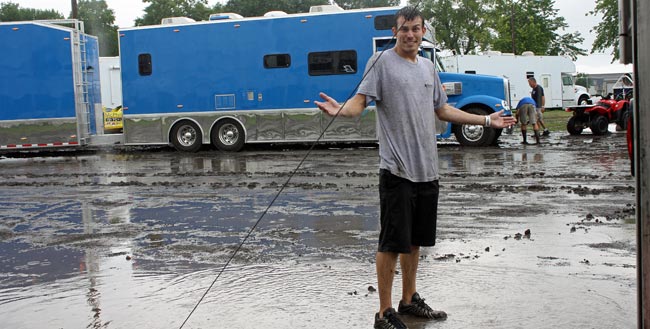 A thunderstorm hit the high-banked, quarter-mile oval around 4:45 p.m. CT, deluging the facility with heavy rain and even a few moments of hail. The racetrack was left saturated and the pit area was turned into a sea of mud, forcing track and series officials to cancel the evening’s scheduled 50-lap, $10,000-to-win event.

The race will not be made up, so the Wild West Tour ends with four of six scheduled races going in the record book. Monday night’s event at Black Hills Speedway in Rapid City, S.D., also fell to the weather.

The cancelation marks the first time the annual WoO LMS show at River Cities has been lost to rain. The national tour has visited the speedway every year since 2006.

The WoO LMS will be idle until July 26-27 when its racers will headline one of the most highly anticipated weekends of the season: the 24th annual Prairie Dirt Classic at Fairbury (Ill.) American Legion Speedway. The $20,000 event, which brings the WoO LMS to Fairbury for the first time, includes WoO LMS time trials, heat races and a special ‘Race of Champions’ on Fri., July 26, and B-Mains and the 100-lap Prairie Dirt Classic on Sat., July 27.