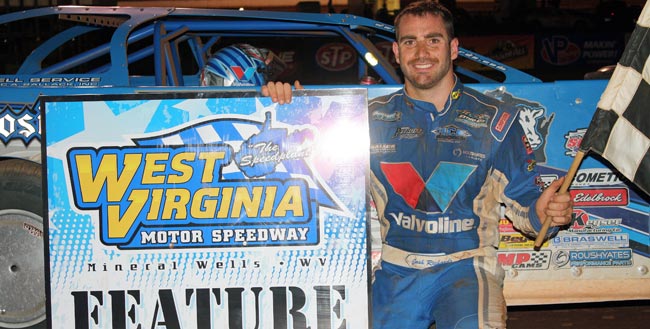 In winning for the second time this season at a track in his home state – after falling short of victory at West Virginia facilities for the first nine years of his racing career – the 25-year-old star from Shinnston, W.Va., snapped a nine-race winless stretch on the national tour. He also padded his WoO LMS points lead – an edge he actually continued to build with consistent finishes during his modest checkered-flag slump.

“It feels like it’s been forever since we’ve been in Victory Lane,” said Richards, whose eighth WoO LMS win of 2013 was his first since July 11 at Red River Co-op Speedway in Winnipeg, Manitoba. “We’ve had some really good runs (over the past month-and-a-half), but we’ve just been lacking a little bit and we had a few races where we had stuff just not go our way. It definitely went our way tonight.”

Richards, who started from the outside pole, passed polesitter Tim McCreadie of Watertown, N.Y., for the lead on lap 14 and was never headed. After Rick Eckert of York, Pa., saw his hopes of challenging for the top spot evaporate due to terminal engine trouble on a lap-22 restart, Richards cruised alone out front for the remainder of the distance to record his 47th career win on the WoO LMS.

Richards swept the evening’s action, preceding his $10,650 victory by setting fast time and winning his heat race. He overtook McCreadie to win both the heat and the feature.

The deciding move in the headliner – the first WoO LMS event at WVMS since the three-decade-old track was reconfigured in 2012 from a sprawling five-eighths-mile oval to a shorter four-tenths-mile layout – came when Richards seized an opportunity to slide underneath McCreadie through turns three and four as the race’s early pacesetter was hampered by a slower machine on lap 14.

“I was confident we could get by him. I just didn’t know when or where,” said Richards, who drove his father Mark’s familiar Valvoline-sponsored Rocket Chassis house car. “I would’ve rather have done it in a race condition, but I guess that’s part of racing. Lapped traffic got real hairy for awhile there.”

The only driver who appeared capable of threatening Richards was Eckert, who passed McCreadie for second on lap 17 and drew within a car length of Richards before a caution flag flew on lap 22 for a slowing Lanigan. Eckert’s bid ended before it could gain any steam, however, when he pulled up lame in turn two on the ensuing restart and was pushed to the pit area.

“After I moved around at the end of the race I felt like we got better,” said Richards, who exceeded the $200,000 mark in season earnings with his victory. “I knew the tire wear was probably an issue, so I’d try to run a hard lap and then ride awhile. I tried to find a comfort zone and it worked out.”

Shaver, 49, advanced from the sixth starting spot to finish in the runner-up spot. He grabbed second place from Johnson on the lap-34 restart and turned back Johnson’s late-race challenges to preserve the position.

The bridesmaid finish was Shaver’s second to Richards on the 2013 WoO LMS, duplicating his effort in the June 27 Firecracker 100 preliminary A-Main at Lernerville Speedway in Sarver, Pa.

“He could turn better and keep his momentum up better,” Shaver said of Richards. “I was kind of tight and had to scoot it and just couldn’t keep my speed up.

“I’ll take second. Earlier in the race I felt like we were struggling a little bit, but it just kept coming to me. I just feel fortunate to be able to win last night and finish second tonight with these guys.”

Six caution flags slowed the A-Main. The most serious was for a multi-car accident in turn three on the opening lap that eliminated Steve Lucas of Charleston, W.Va., Chris Garnes of Evans, W.Va., and Tim Fuller of Watertown, N.Y.

Several WoO LMS regulars joined Eckert and Fuller in experiencing problems that left them with subpar finishes. The list included Shane Clanton of Zebulon, Ga., whose left-rear tire blew on lap 28; Bub McCool of Vicksburg, Miss., who was knocked from the top 10 on lap 34 when he spun between turns three and four; Chub Frank of Bear Lake, Pa., who was running fourth when he slowed with a flat tire on lap 44; and Eric Wells of Hazard, Ky., who ran in the top five early but ultimately fell from the top 10 when he stopped behind Frank on lap 44.

McCreadie settled for a sixth-place finish after running in the top five for most of the distance. Clint Smith of Senoia, Ga., rallied from a lap-22 pit stop to place seventh while fellow Georgian Clanton salvaged an eighth-place finish to remain second in the points standings. Rod Conley of Wheelersburg, Ohio, was ninth and WoO LMS rookie Morgan Bagley of Longview, Texas, who also pitted during the race, rounded out the top 10.

Richards topped the 23-car field in Ohlins Shocks Time Trials, establishing a new track record on the shortened layout of 16.830 seconds. He surpassed the existing standard of 17.021 seconds set by John Blankenship on April 21, 2013.

It was Richards’s series-leading sixth fast-time honor of 2013 and the 37th of his career, breaking him out of tie with Eckert atop the tour’s alltime list in the category.

Heat winners were Richards, Wells and Eckert. No B-Main was contested.

***NOTE: Corey Conley was scheduled to start 21st in his own No. 14 but had to scratch that car due to a broken rearend. He took the green flag at the rear of the field in another car.

Tonight’s action, which features a 50-lap, $10,000-to-win A-Main, marks the first WoO LMS event at WVMS since the track was downsized slightly from a five-eighths of a mile in length to a four-tenths-mile oval in 2012.

11:15 p.m. – Josh Richards got back on track, ending a rare nine-race winless streak on the WoO LMS with a convincing victory in tonight’s 50-lap A-Main.

Richards passed Tim McCreadie for the lead on lap 14 and was never headed. After Rick Eckert’s hopes to challenge for the lead evaporated due to mechanical trouble on a lap-22 restart, Richards cruised alone out front for the remainder of the distance for his eighth win of the season.

Steve Shaver finished second, following Richards across the finish line one night after winning the RaceFest ADRA Late Model feature over Richards. Davey Johnson placed third, Darrell Lanigan was fourth and Scott Bloomquist was fifth after pitting to change a tire on lap 28.

10 p.m. – With the six open-wheel Modified heats complete and the first of two Hot-Mod qualifiers on the track, WoO LMS officials have blown the eight-minute horn to line up the A-Main. Teams are now making final preparations for tonight’s 50-lapper.

T-Mac will lead them

9 p.m. – Tim McCreadie drew the pole position for the 50-lap A-Main, putting him in the catbird’s seat as he bids for his sixth victory of 2013. He will share the front row with Josh Richards, who has seven triumphs this season but last won on the WoO LMS on July 11 at Red River Co-op Speedway in Winnipeg, Manitoba.

All that’s left for the WoO LMS is the running of the RaceFest feature, but the teams will have to wait a bit before hitting the track. The 410 Sprint Car heats are completed and six open-wheel Modified and two Hot-Mod heats are left on the schedule before the WoO LMS headliner, but there’s currently a delay for safety crews to tend to a Modified driver who crashed between turns three and four.

8:40 p.m. – Josh Richards, Eric Wells and Rick Eckert captured the three 8-lap heat races…. Tim McCreadie outgunned Richards for the lead at the start of the first prelim, but Richards kept the pressure on and finally was able to underneath McCreadie through turns three and four heading to the white flag to assume command…. Wells – racing with a bare-bones black body on his car after making repairs to the machine following an accident last Saturday night at Winchester (Va.) Speedway – controlled the second heat. He beat his chassis builder, Scott Bloomquist, to the finish line by 0.790 of a second…. Eckert registered the most dominant triumph, winning the third heat by 3.261 seconds over Steve Shaver….

Complete results from the heats can be read here.

8 p.m. – Looking for his second career win in his home state of West Virginia, Josh Richards established a new track record for WVMS’s new four-tenths-mile oval with a lap 16.830 seconds in Ohlins Shocks Time Trials. He surpassed the existing one-lap standard of 17.021 seconds set by John Blankenship of April 21, 2013.

It was Richards’s series-leading sixth fast-time honor of 2013 and the 37th of his career, breaking him out of tie with Rick Eckert atop the tour’s alltime list in the category.

The Rook is fast — so far

7:20 p.m. – Eric Wells shined in hot laps, ripping off the fastest lap of 16.869 seconds that unofficially puts him under the track record.

Cars are now lining up for Ohlins Shocks Time Trials, which will begin shortly.

Engines are now firing in the pit area as teams prepare for hot laps, which are scheduled to begin at 7 p.m. After Ohlins Shocks Time Trials, three 8-lap heat races will be contested with all drivers qualifying for the A-Main and the top-two going to the feature redraw.

With WVMS hosting a huge racing program — also on the card are 410 Sprint Cars, open-wheel Modifieds, 4-Cylinders and Hot Mods — officials have arranged tonight’s schedule so the WoO LMS will be the first feature to hit the track. In fact, the WoO LMS 50-lapper will be run before any of the support-division B-Mains in hopes of getting the Outlaw teams on the road at a reasonable hour; the tour regulars are looking at a six-hour overnight haul to Selinsgrove (Pa.) Speedway, which hosts the circuit for the next two evenings.

5:55 p.m. – With the 2013 season winding down, time is running out for Morgan Bagley to catch Eric Wells in the chase for the WoO LMS Rookie of the Year honor. Just nine races will remain on the tour’s scheduled after tonight’s program.

Wells enters tonight’s action with a 104-point lead (3,950-3,846) over Bagley in the rookie standings, which are determined using the first-year travelers’ 30 best finishers. The difference is top-five finishes: Wells has eight while Bagley has just one to his credit. With top-10 finishes almost equal (Wells leads in the category, 16-14), Bagley has an opportunity to gain points if he can rack up top-five finishes down the stretch — but if he doesn’t get on a hot streak now, Wells will be able to waltz to the top-rookie trophy.

4:50 p.m. – The WoO LMS regulars will undoubtedly have their hands full tonight with Steve Shaver, the veteran from nearby Vienna, W.Va., who enters this evening’s program hot off a $4,000 victory in last night’s RaceFest-opening 30-lap American Dirt Racing Association feature here at WVMS.

Shaver, who swept a doubleheader the last time the WoO LMS ran at WVMS in May 2010, looked extremely strong last night behind the wheel of his Rumley Enterprises Longhorn machine. He set fast time, started fourth in the feature and grabbed the lead midway through the 30-lapper en route to a convincing triumph.

4:35 p.m. – It’s a scorching start to Labor Day weekend for the WoO LMS. Temperatures have soared to near 90 degrees today at WVMS, making this one of the hottest race days of 2013 for the WoO LMS.