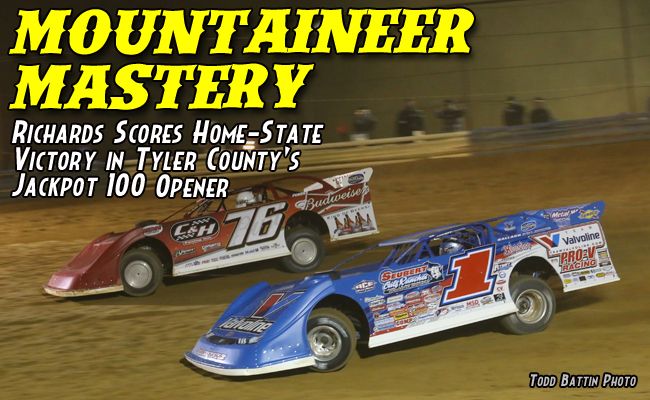 Richards topped Clanton by 0.733 seconds at the finish in in claiming his 51st career WoO LMS victory. The 27-year-old driver of the Valvoline-sponsored Rocket Chassis house car earned $8,675 for his second-career triumph at Tyler County Speedway.

“Those guys did a great job,” Richards said of Clanton and Overton’s efforts. “We were all racing hard. I knew Shane was right there on us. We just had to get what we could and luckily it worked out.”

Clanton of Zebulon, Ga., settled for second in Saturday’s feature, keeping his lead in the WoO LMS championship chase at 90 points over Richards, who leaped sixth-finishing Darrell Lanigan of Union, Ky., for second in the standings.

A fading Overton held on to third at the finish, just ahead of seventh-starting Chris Ferguson of Mount Holley, N.C., who earlier in the evening earned fast time honors for the third time in three WoO LMS appearances this season but couldn’t score his third straight series victory. Ninth-starting Tim Dohm of Cross Lanes, W.Va., rounded out the top five in a race slowed by five cautions.

After pressuring Overton for much of the race, Richards appeared to be headed for a runner-up finish when the track’s high line began to fade shortly after the halfway mark. But after Clanton muscled his way by Richards for second on lap 34, Richards gave the top groove another shot and began to make up ground.

Richards retook second from Clanton just two laps later and began closing quickly on the fading Overton. He pulled to the outside of Overton in turns one and two on lap 36 and drove hard into turns three and four.

Overton let his machine drift high exiting turn four in an attempt to block Richards’ momentum off the corner, but Richards used a crossover move to pull to the bottom of Overton down the front straightaway and completed the winning pass with another hard drive into turn one on lap 37.

“It seemed like (Overton) was fading a little bit at the end,” Richards said. “I just tried to go for the top. I knew I’d kick myself for not trying it, so if we would’ve got passed it would’ve been alright. But it worked out.”

Clanton, 39, cleared Overton for second one lap after Richards took the lead and closed on the leader in the final two laps. He took a look under Richards entering turn one on the final circuit, but his Weldbank Energy-sponsored Capital Race Cars house car drifted high exiting turn two, allowing Richards to edge away to the victory.

“I got to showing the nose to Overton there and he kept getting lower and lower,” Clanton said of his brief challenge on Overton for the lead. “Finally, Josh came back around us on that outside.

“We raced back by Overton there. I think we were a little bit better than Josh in the bottom, but he had a good car.”

Overton, 24, once again fell just short of earning his first-career WoO LMS victory, but the national tour’s Rookie of the Year leader added to his impressive season with his fourth top-three finish.

“I’ve lost three or four of these races now in the last three or four laps,” said Overton, who was making his first-ever appearance at Tyler County in his Doug and Cathy Varnadore-owned MasterSbilt by Huey machine. “I just don’t think we tightened up enough. We’ll try it again tomorrow and maybe we’ll hit it right.”

Lanigan, the three-time and defending WoO LMS champion, charged from his 20th starting spot to finish sixth, salvaging a night that began on a poor note when his primary car suffered mechanical problems just before hot laps. Steve Casebolt of Richmond, Ind., was seventh at the finish with Morgan Bagley of Longview, Texas, eighth. Former WoO LMS champion Rick Eckert of York, Pa., and Eric Wells of Hazard, Ky., rounded out the top 10.

2015 World of Outlaws Late Model Series Point Standings as of May 23 – 15 A-Mains completed (rank/driver/points/deficit to leader):