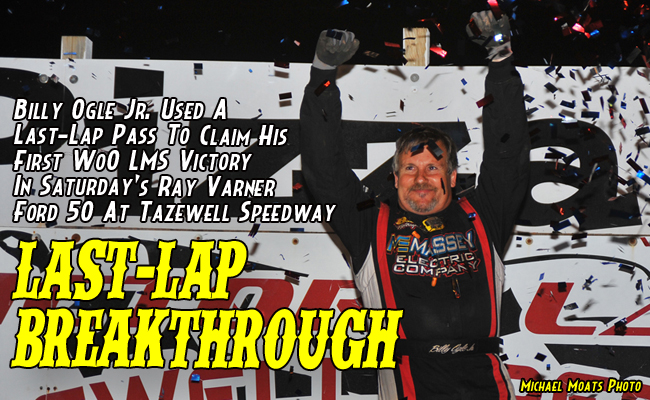 TAZEWELL, Tenn. – April 11, 2015 – Billy Ogle Jr. made sure his first career World of Outlaws Late Model Series victory was a memorable one.

The veteran Knoxville, Tenn., racer overtook Josh Richards of Shinnston, W.Va., with a dramatic pass on the final lap of Saturday night’s Ray Varner Ford 50 at Tazewell Speedway and earned $10,575 for one of the biggest victories of his career.

“This is definitely one of my top wins,” the 50-year-old Ogle told a capacity crowd that cheered him to victory at one of his home tracks. “I’d never won an Outlaws race, so now I can check that off my list. That was a goal I’ve really been wanting to get.”

Ogle, who spent the early years of his career racing weekly at Tazewell’s high-banked third-mile oval, had to rely on late heroics after running third behind Richards and WoO LMS points leader Shane Clanton of Zebulon, Ga., for most of the race.

Clanton, who entered Saturday’s race having won four of the year’s first seven WoO LMS events, chased Richards through most of the distance as the two WoO LMS veterans broke away from the pack. But Richards and Clanton both began to fade as the race entered its crucial moments.

Ogle made the most of his competitors’ struggles. He pounced when Clanton slipped out of the grove in turn two on lap 42 to grab the second spot and was looking under Richards for the lead just a few laps later.

With the tires on his Rocket Chassis house car fading, Richards managed to turn back Ogle’s heavy pressure through most of the race’s final five laps, but he couldn’t keep his car from sliding slightly out of the groove as he made his final trip through turns one and two.

The small opening was all Ogle needed. He dove underneath Richards and pulled even in turn two and muscled his way by as the two cars made contact exiting the corner. Richards attempted to retake the lead with a hard charge of his own entering turn three, but Ogle used the preferred line to easily pull away down the homestretch.

“I knew that Josh was having a problem with about five or 10 to go and he was really holding me up,” said Ogle, who credited his American Racer tires for allowing his Stacy Boles-owned Rocket Chassis to remain strong when his competitors faded. “When we got the white (flag), I said this is it. He kind of struggled off two and I just kind of muscled through there.”

Another slip high by Richards in the final corner allowed Jimmy Owens of Newport, Tenn., to drive by and claim the runner-up finish. Richards settled for third while Clanton recorded his eighth top-five finishes in eight WoO LMS events this season with his fourth-place result. Three-time and defending series champion Darrell Lanigan of Union, Ky., finished fifth.

Owens was quiet for most of the race after starting from the sixth position, but he took advantage of opportunities to move his Rowland Racing Club 29 Race Car forward. Two of those opportunities were created by Ogle’s determined drive to the front.

“Things just worked our way,” said Owens, a three-time champion on the Lucas Oil Late Model Dirt Series. “We followed Billy up through there. He’d kind of scooted them out of the way and we’d just follow him right through the hole. We came home second, so I’m happy.”

Richards, the three-time WoO LMS champion who is back on the tour full time this season after missing most of 2014 due to medical concerns, seemed to be headed for his second WoO LMS victory of the year before his uncharacteristic mistake gave Ogle the opportunity to take the lead.

“I feel like I gave it away there,” Richards said. “I kept trying to protect too much and got myself sideways in the middle of the corner. I should’ve just rolled the corner like I was earlier.

“He was just better than I was. He did what he had to do and we just got beat tonight.”

Rick Eckert of York, Pa., recovered from a problem during the night’s time trials session to finish sixth in the main event, ahead of Chub Frank of Bear Lake, Pa., who was racing for the first time since undergoing knee-replacement surgery in February. Vic Hill of Mosheim, Tenn., finished eighth with Brad Neat of Dunnville, Ky., and Steve Smith of Powell, Tenn., rounding out the top 10 finishers.

The race was slowed by three cautions. The first appeared when polesitter Donald McIntosh of Dawsonville, Ga., slowed with mechanical problems after just six laps. The up-and-coming racer led the event’s opening lap and was in the middle of a tight three-car battle with Richards and Clanton when he slowed from the second position.

Saturday’s race marked the WoO LMS tour’s first event since opening the year with seven February races in Georgia and Florida. Harsh weather wiped out much of the tour’s spring schedule with five consecutive events – including Friday’s race at Duck River Raceway Park in Wheel, Tenn. – begin either cancelled or postponed.

WoO LMS competitors next move to Farmer City (Ill.) Raceway for two events during the Douglas Dodge Ram Trucks Illini 100 weekend April 17-18. The doubleheader event, which was postponed from its original date of March 27-28 due to inclement weather, features an open practice on Thurs., April 16 ahead of a $6,000-to-win WoO LMS program on Fri., April 17 and a $15,000-to-win WoO LMS event on Sat., April 18. Tickets are available now at http://dirtcar.ticketforce.com.