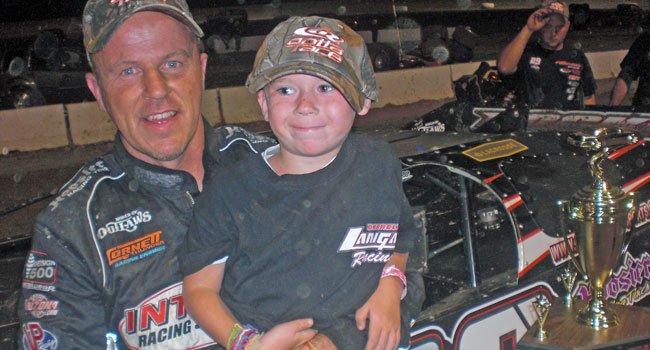 ZANESVILLE, OH – July 31, 2010 – Darrell Lanigan of Union, Ky., returned to his winning ways on Saturday night at Muskingum County Speedway,’ dominating the ‘Pepsi 50’ for his third win in four starts during the World of Outlaws Late Model Series ‘Ohio-Pennsylvania Speedweek.’

The 2008 WoO LMS champion was flawless before a big crowd in the national tour’s fourth annual event at Ronnie Moran’s three-eighths-mile oval. He raced off the outside pole to grab the lead at the start and controlled the remainder of the distance, turning back an early challenge from Steve Shaver of Vienna, W.Va., and then keeping his rivals at arm’s length in an A-Main that was run without a caution flag.

Despite facing heavy lapped traffic late in the frenetic race, Lanigan’s hold on the top spot was never seriously threatened. He kept his GottaRace.com Rocket glued to the inside groove and negotiated the slower cars with aplomb.

“I kinda committed to (running) the bottom,” said Lanigan, who earned $10,750 for his fourth World of Outlaws victory of 2010. “I wasn’t moving. You weren’t gonna get me off the bottom even when it got a little tricky around those lapped cars.

“If anybody was gonna pass me, they were gonna have to go to the outside.”

Tim McCreadie of Watertown, N.Y., and Bart Hartman of Zanesville, Ohio, spent the last five laps battling for the runner-up spot without drawing close enough to make a move on Lanigan. McCreadie nipped Hartman by 0.050 of a second at the finish line to place second in the Sweeteners Plus Rocket car, but the 2006 WoO LMS titlist was 1.304 seconds behind Lanigan.

Shaver, who started from the pole position in a new K&L Rumley machine, nearly nosed ahead of Lanigan for the lead twice in the first four laps but ultimately slipped to fourth in the final rundown. Defending WoO LMS champion Josh Richards of Shinnston, W.Va., who started eighth, reached fifth on lap 29 and stayed there to the checkered flag.

Lanigan, 40, continued his torrid month on the WoO LMS with his first-ever triumph at Muskingum County. He has compiled eight consecutive top-three finishes – a streak that has allowed him to cut his points deficit to Richards from 78 to 22 points and move from third to second in the standings.

“Things have definitely turned around here lately,” said Lanigan, who entered Ohio-Pennsylvania Speedweek coming off four straight bridesmaid finishes during the ‘Wild West Tour.’ “I have no idea what the key to this (roll) has been, but we’re doing something right.”

Lanigan and his Randall Edwards-led crew made the right decisions once again on Saturday, turning their Cornett-powered machine into the class of the A-Main field after struggling to a second-place finish in the first heat.

“We were terrible in the heat race, so we threw a couple things at it for the feature and gambled a little bit on tires (softer compound) and everything came out O.K.,” said Lanigan, who recorded his 16th career win on the WoO LMS. “You couldn’t ask for a better car. This thing has been excellent everywhere we’ve gone lately.

“I think this car is finally getting worked in. I guess that sometimes you gotta run ‘em a little while to make ‘em good.”

There also might be a less tangible reason for Lanigan’s Ohio-Pennsylvania Speedweek victory explosion. His fortunes took a major turn for the better when he began wearing two Silly Bandz on his left wrist.

“This is my lucky charm right here,” Lanigan said after the race while displaying the two colorful rubber bracelets he received from his fiancée Erin’s young son Gavin. “(Gavin) gave me Silly Bandz before I left for this trip and said, ‘Don’t take ‘em off, they’ll bring you good luck.’

“They’ve been pretty good. Josh (Richards) has been trying to rip ‘em off me, but we’ll keep ‘em on.”

Both McCreadie and Richards – Lanigan’s primary competition for the $100,000 WoO LMS championship – also wore Silly Bandz on Saturday that were given to them by Gavin, who was on hand for the first time during Ohio-Pennsylvania Speedweek and celebrated with Lanigan in Victory Lane. But neither driver got quite the boost in fortune that the Bandz have provided to Lanigan.

McCreadie, 36, had to be content with his fifth runner-up finish on the 2010 tour after moving forward from the sixth starting spot. It was his first-ever start at Muskingum County.

“We were good from the green, but I just couldn’t get by Donnie (Moran) real quick (for fourth) and didn’t have enough time to get close to Darrell,” said McCreadie, who finally overtook Moran on lap 22 and then spent the next 14 laps erasing a straightaway deficit to Hartman and Shaver. “I would’ve liked to see a yellow to tighten the field, but who knows what would’ve happened on the restart. I might’ve lost some spots, so we’ll take second.”

The 41-year-old Hartman fell short in his bid for victory at his hometown track, but he was in good spirits after the race.

“We went a little harder on tires than these guys and we thought it would pay off in the end,” said Hartman, who grabbed second from Shaver with an outside pass on the backstretch on lap 36 but couldn’t repel McCreadie’s late pressure. “Actually, I thought with the straight (green-flag) running we’d be better off with the harder right-rear, but it seemed like I abused the left-rear until the right rear got going and then I didn’t have any drive.”

Eddie Carrier Jr. of Salt Rock, W.Va., finished second, earning the $500 ‘Bonus Bucks’ cash for being the highest-finishing driver who hasn’t won a WoO LMS A-Main and wasn’t ranked among the top 12 in the points standings. Rookie Austin Hubbard of Seaford, Del., moved up two spots to finish seventh, while Shane Clanton of Fayetteville, Ga., who used a provisional to start the A-Main, rallied from the 23rd starting spot to place eighth. Gregg Satterlee of Rochester Mills, Pa., and fifth-starter Ron Davies of Erie, Pa., rounded out the top 10.

Lanigan was quickest in the 33-car Ohlins Shocks Time Trials session, earning his third fast-time honor of 2010 with a lap of 15.699 seconds.

Heat winners were Shaver, Richards, Carrier and Hartman. The B-Mains were captured by Rick ‘Boom’ Briggs of Bear Lake, Pa., and Russell King of Bristolville, Ohio.

FOLLOW THE ACTION ON TWITTER: Fans can now keep up-to-date with the World of Outlaws Late Model Series online and through text messages on cell phones via Twitter, the internet’s fast-growing social-networking and micro-blogging website. Updates are provided to Twitter ‘followers’ of the WoO LMS throughout each race night, and fans also receive breaking news and interesting notes from the tour.

To sign-up as a WoO LMS ‘follower’ on Twitter to receive updates anywhere at anytime, visit http://twitter.com/WoOLateModels.

Listeners will need Windows Media Player 9 or higher to listen to the DIRT Radio Network. For technical support or questions, e-mail [email protected]