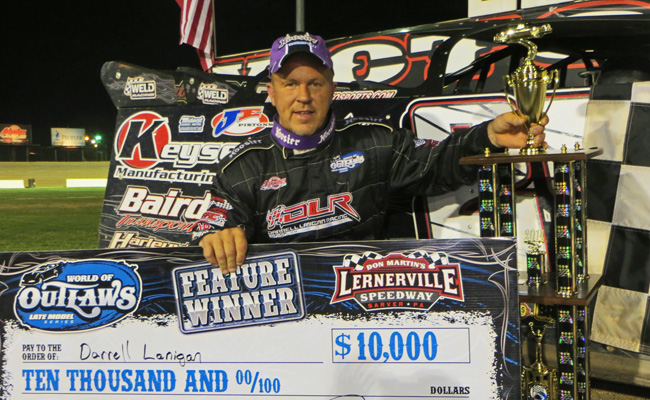 Firecracker 100 Winner Tops Early Battle with Marlar, Pulls Away From Eckert Late for 14th Victory of 2014

SARVER, Pa. – Aug. 29, 2014 – Series points leader Darrell Lanigan picked up right where he left off at Lernerville Speedway, earning his 14th World of Outlaws Late Model Series victory of the season Friday night when the national tour returned to the western Pennsylvania track for the first time since Lanigan’s $30,000 Firecracker 100 victory in June.

Lanigan, 44, of Union, Ky., swept the program at Lernerville’s inaugural Working Man 50 on Friday, earning $10,650 as he closed to within one victory of matching his WoO LMS record 15-win season of 2012. The triumph also marked the third win in four WoO LMS A-Mains at Lernerville this season for Lanigan, who claimed one of two preliminary races during the Firecracker 100 weekend to go along with his victory in the event’s blockbuster finale.

Lanigan started the evening by earning fast time honors and later won his heat race and drew the pole for 50-lap feature. However, his A-Main victory was far from easy, as outside polesitter Mike Marlar of Winfield, Tenn., tried his best to spoil Lanigan’s party.

Marlar pressured Lanigan through the race’s opening laps before taking the lead on lap four. Marlar edged away just after taking the point, but Lanigan picked up his pace and reeled in Marlar by lap 15. After a back-and-forth battle through lapped traffic, Lanigan retook the lead for good on lap 17 and never looked back. He pulled away from runner-up finisher Rick Eckert of York, Pa., on multiple late restarts on his way to his series-leading 67th career WoO LMS victory.

“Once (the track surface) blew off a little bit there our car got really, really good there in the middle to the bottom,” said Lanigan, who drew closer to his third WoO LMS championship in stretching his lead in the series standings to 282 points over Eckert. “It was just unbelievable. You hate to stop when a car’s that good.

“We could go anywhere on the racetrack. This car’s been phenomenal all year. I can’t think everybody enough on this crew. They’re doing a great job.”

Lanigan crossed the finish line 1.646 seconds ahead of Eckert, who once again fell just short of claiming his first WoO LMS victory of the season. Tim Fuller of Watertown, N.Y., charged from his 13th starting spot to finish third with fellow Watertown driver Tim McCreadie fourth and Eric Wells of Hazard, Ky., rounding out the top five. Marlar faded during the second half of the race, taking sixth at the finish.

Friday’s race marked the second straight WoO LMS event that Lanigan gave up the lead during early going. But just as he recovered to retake the point from Brady Smith on his way to winning Aug. 23’s event at Merritt Speedway in Lake City, Mich., Lanigan once again maintained his composure after Marlar got by him in Friday’s race and waited for his self-designed Club 29 Race Car to hit its groove.

“You’re always worried when somebody gets the lead like that,” said Lanigan, who logged his 28th top-five finish in 32 WoO LMS A-Mains contested this season. “But I could stay right there with him and pressure him a little bit. I knew once it blew off a little bit we would be really good.”

Eckert and the Rocket Chassis house car team continued their recent improvement with the runner-up performance, but Eckert’s search for victory will continue into the tour’s final six races of the season as the 48-year-old driver looks to avoid going winless on the series for the first time since 2007.

“That guy’s hard to beat when you’re in front of him,” Eckert said of Lanigan. “When he starts in front of you it’s almost impossible. He’s really good. Our team’s been working hard. I think we have something we can race with him now. We’ve been working on it a little bit and I think we’ve got a shot.”

Fuller’s run to the front marked another impressive performance since rejoining the WoO LMS mid-season. His Kennedy Motorsports Rocket Chassis appeared strong enough to contend for a victory as he charged through the field early in the race, but his run mellowed out once he reached the third position just past halfway.

“Starting back so far, it was good to be able to come up through there,” said Fuller, who claimed his best WoO LMS A-Main result since winning the tour’s July 18 event at River Cities Speedway in Grand Forks, N.D. “Our strong point was on those restarts. We were pretty much on the bottom.”

The race was slowed by four cautions. Chub Frank of Bear Lake, Pa., drifted over the banking on lap 18 for the first yellow and later drew another caution when he slowed with a flat tire on lap 24. The third caution appeared when hometown driver John Garvin Jr. spun and collected Alex Ferree of Saxonburg on lap 36, and the fourth and final yellow waved when Dan Angellicchio of Mt. Pleasant, Pa., slowed.

Russell King of Bristolville, Ohio, claimed a $3,000 victory in the Uncle Sam 30, a makeup race for Firecracker 100 non-qualifiers that was rained out at the event in June. King, the 2009 WoO LMS Rookie of the Year, earned his second Uncle Sam 30 victory.

The night’s preliminary action was twice delayed by red flags, both appearing for rollover accidents. Hometown driver Michael Norris went for a wild ride during the fourth heat race when he got over the turn-four cushion, and Boom Briggs of Bear Lake, Pa., also rolled during the second B-Main. Both drivers emerged uninjured from their heavily damaged race cars.

The WoO LMS continues its three-race Labor Day weekend with a move to Selinsgrove (Pa.) Speedway for events on Saturday and Sunday. The half-mile oval hosts the series for the Showdown on Sand Hill Saturday and the National Late Model Open on Sunday.

Rookie of the Year Standings as of Aug. 29 (32 A-Mains completed; best 25 races counted)