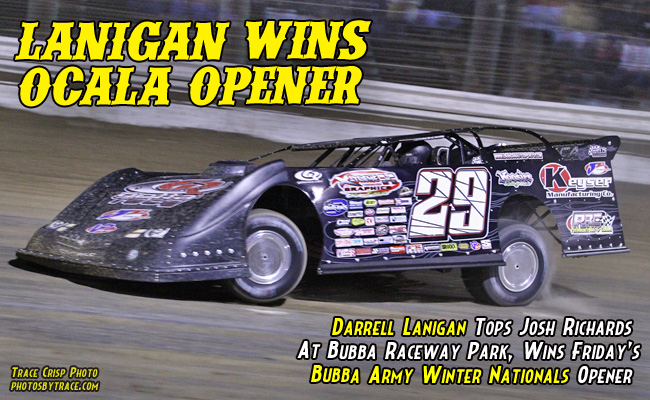 OCALA, Fla. – Feb. 13, 2015 – Turning around his sluggish start to the season, Darrell Lanigan of Union, Ky., topped a late duel with Josh Richards of Shinnston, W.Va., during Friday’s DIRTcar UMP-sanctioned A-Main at Bubba Raceway Park to earn a $5,000 victory during the opening night of the fourth annual Bubba Army Winter Nationals.

Lanigan, the three-time and defending World of Outlaws Late Model Series champion, rallied after losing the lead to Richards on lap 20 of the 30-lapper and retook command when Richards struggled with traffic on lap 26. The 44-year-old Lanigan pulled away through the race’s final four laps, earning his seventh career victory at the 3/8-mile, egg-shaped oval.

Winning the caution-free race was a much-improved performance for Lanigan, who began his quest for a record fourth WoO LMS title with subpar finishes of eighth and 11th during the national tour’s season-opening doubleheader Feb. 6-7 at Screven Motor Speedway in Sylvania, Ga. He’ll look to keep his Cornett-powered Club 29 Race Car up front on Saturday and Sunday as the Bubba Army Winter Nationals continue with a pair of $10,000-to-win WoO LMS programs.

“We went to Screven and struggled hard and went home and regrouped,” Lanigan said of his disappointing performances at Screven’s Winter Freeze V. “Instead of sitting down here in a parking lot for three days, we went home and got our notes together and did our homework. We went through everything and just made sure it was all was 100 percent before we came back.”

Richards, also a three-time WoO LMS champion, settled for the runner-up finish, crossing the finish line, 1.170 seconds behind Lanigan in the Rocket Chassis house car. Chub Frank of Bear Lake, Pa., drove his Longhorn Chassis from eighth to third, while Morgan Bagley’s Black Diamond by Club 29 machine slid back to fourth after leading the race’s first 17 laps. Brandon Overton of Evans, Ga., rounded out the top five in his MasterSbilt by Huey car.

The first half of the race belonged to Bagley. After charging from third to first on the opening lap, the Longview, Texas, driver dominated the first half of the race while pulling to nearly a straightaway advantage before traffic slowed his pace. The fifth-starting Lanigan was looking under Bagley by lap 17 and used a high-side charge through turns one and two to jump to the lead on lap 18 while Bagley remained pinned behind a slower machine.

Lanigan had his own struggles with traffic a few laps later, allowing the high-running Richards to sweep by him on lap 20 with another top-side run through turns one and two. Richards appeared headed for his third victory in his first six races of the season before his own problems in traffic allowed Lanigan to retake command with yet another high-side pass in turns one and two on lap 26.

“He got by me when I got in a bad position, but then he got himself in a bad position with a lapped car,” Lanigan said of the battle with his WoO LMS rival Richards. “I think we both had pretty good cars. It just depended on who got through lapped traffic the best.”

Richards’ runner-up finish was a recovery from a dismal start to the race that saw the 26-year-old racer drop from the outside pole to sixth in the race’s first three laps. He recovered to enter the lead battle by halfway, but traffic didn’t play in his favor.

“We did what we could,” said Richards, who owns a pair of WoO LMS victories at Bubba Raceway Park. “We had a really good car, but the way lapped traffic played out we just let one get away from us.”

Polesitter Boom Briggs of Bear Lake, Pa., slid back to the sixth spot at the finish, while Shane Clanton of Zebulon, Ga., finished seventh after running as high as third. Tim McCreadie of Watertown, N.Y., charged from the 24th starting spot to finish eighth with Mark Whitener of Middleburg, Fla., and Rick Eckert of York, Pa., rounding out the top 10.