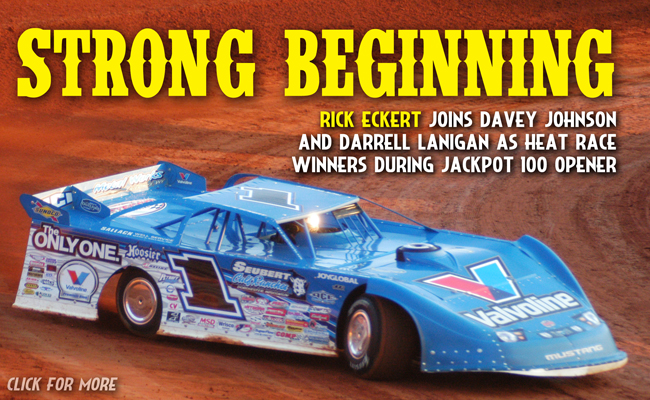 MIDDLEBOURNE, W.Va. – May 24, 2014 – The World of Outlaws Late Model Series ventured deep into the mountains of West Virginia for the opening night of the 3rd Annual Jackpot 100 on Saturday at Tyler County Speedway. When the dust settled from the furious battles contested in heat race action Davey Johnson, Rick Eckert, and Darrell Lanigan had established themselves as lead contenders to claim the $20,000 payday in Sunday night’s finale.

The first heat race found Ohlins Shocks Fast Qualifier Zack Dohm from Cross Timbers, West Virginia battling fellow front row resident Davey Johnson for the lead in the opening laps of the 17 lap affair before Johnson checked out on the field to score the win by over two seconds. Meanwhile Shane Clanton advanced to the second spot to earn a spot with Johnson in the redraw for Sunday evening’s finale. Other transfers included Mike Benedum, Zack Dohm, Butch McGill, and Tim Senic.

Heat race #2 was brought to the green by Tim Dohm and Jacob Hawkins with Dohm jumping to the early lead as three wide battles raged behind him. Unfortunately for Dohm his time at the front would be short-lived as contact with an infield tire on lap 4 sent him spinning from the top spot as Tim McCreadie inherited the lead with Hawkins in pursuit. On the ensuing restart Rick Eckert came to life and shot past Hawkins into second and a few laps later overcame a side-by-side battle with Tim McCreadie to claim the top spot. A late-race caution set up a two lap dash to the checkers, and Hawkins took advantage of the situation to move past McCreadie into second. Eckert bolted to the win with Hawkins in second as the pair moved onto Sunday’s redraw. McCreadie, Chub Frank, Boom Briggs, and Frank Heckenast Jr. rounded out the transfers.

The third and final 17 lap, heat race would definitely not be short on excitement. The initial start was nullified with Corey Conley forfeiting his outside-front-row starting spot after firing too early against pole sitter, Darrell Lanigan. Clint Smith assumed the spot on the front row with Lanigan and grabbed the lead from the current WoOLMS point leader at the drop of the green flag. Smith maintained the top spot as Lanigan began to narrow his advantage by the midway point. In the closing laps Lanigan stepped to the outside to challenge the leader as the duo began to battle furiously for the top spot. The complexion of the race took a drastic change entering turn four on lap 15, when Lanigan made contact with the leader, which caused Smith to get completely sideways as he temporarily stalled. Lanigan grabbed the lead and Smith rejoined the pack, but not before falling back to fourth. The two-time WoOLMS champion Lanigan raced to the victory with Morgan Bagley claiming the final redraw spot. Jared Hawkins, Clint Smith, Derek Doll, and Matthew Cochran took the transfer spots.

Zack Dohm started the night by topping the thirty-one entries on hand in Ohlins Shocks Time Trials with a 12.835 second lap around the ¼ mile oval.

The WoO LMS will sanction the second night of the 3rd Annual Jackpot 100 on Sunday at Tyler County Speedway as a last chance showdown and the 75 lap, $20,000-to-win finale will headline the program.