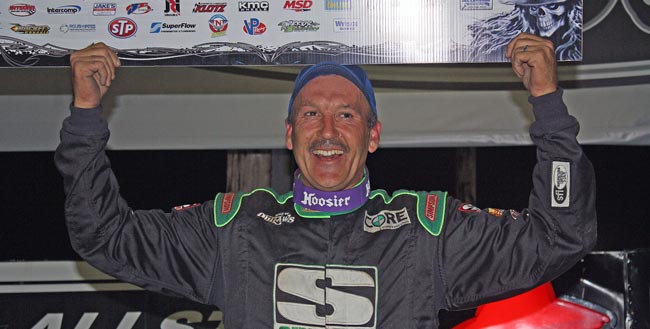 Fuller, 45, of Watertown, N.Y., flashed under the checkered flag just 0.101 of a second ahead of Lake City, Mich.’s Spangler and 0.234 of a second in front of Fruitport, Mich.’s Neiser to record his first WoO LMS triumph since June 17, 2010, at Merrittville Speedway in Thorold, Ont.

The $10,550 win was the 13th of Fuller’s career on the national tour but first since joining Kennedy Motorsports last summer as a teammate to Shane Clanton of Zebulon, Ga. He entered Saturday night’s event with just four top-five finishes in 35 WoO LMS A-Mains this season but confident that his breakthrough run was close at hand.

“It’s been a slow start (with Kennedy Motorsports) and I was beginning to wonder if we were ever going to win,” said Fuller, who sits sixth in the WoO LMS points standings. “I have struggled so long, there’s so many people to thank. Everybody that stuck with me through thick and thin – (car owner) John Kennedy, Shane Clanton, (chief mechanic) Ross (Robinson), Donnie (crewman Eugene Mulhany), my wife Lori. I can’t thank them all enough.

“I’ve felt like we’ve been getting closer and closer, so I hope this is a sign of things to come.”

Spangler, 44, and Neiser, 43, fought Fuller down to the wire, both drivers threatening to join the short list of local stars to pull off a WoO LMS victory. They each settled for finishes that were by far their best-ever in World of Outlaws competition.

Defending WoO LMS champion Darrell Lanigan of Union, Ky., finished fourth, nearly three seconds behind the lead trio after carving his way through the pack from the 20th starting spot. Clint Smith of Senoia, Ga., completed the top five, fading to fifth place after starting on the outside pole and leading the first 39 laps of the A-Main.

Fuller, whose two previous WoO LMS appearances at Merritt resulted in unspectacular finishes of 15th in 2011 and 12th last year, credited his success to his pre-race tire-compound selection.

“I picked the softest tire there was (under the event’s tire rule) and it worked,” Fuller said of the Hoosier LM 20-compound rubber he bolted on his Capital Race Car. “Shannon Rush (of Hoosier Tire), he kept saying, ‘I don’t know if it’ll work,’ but I had nothing to lose starting 14th.

“The bottom line is, we outfoxed ’em on tires. It happens in this deal. I’ve been outfoxed before.”

Fuller reached second place behind Smith on lap 32 and was beginning to challenge his good buddy when the race’s first caution flag flew on lap 35 when Scott Phillips of Marlette, Mich., slipped over the quarter-mile oval’s turn-four bank. After another caution flag flew on lap 36 for a turn-four spin by Tim McCreadie of Watertown, N.Y., Fuller surged around the outside of Smith to assume command on lap 40.

One more caution flag was needed, on lap 41 when Brady Smith of Solon Springs, Wis., spun out of fifth place in turn four. Fuller then spent the remainder of the distance trying to fend off Neiser, who was coming hard on the inside of the track, and later Spangler, who started alongside Fuller in 13th and appeared in third place with a lap-42 pass of Clint Smith.

Neiser nosed his MasterSbilt car inside of Fuller off turn two on lap 48, prompting Fuller to switch to the inside lane racing through turns three and four. Fuller stayed on the bottom for the entire final lap – a strategic maneuver that dulled Neiser’s bid but in turn opened the top side for Spangler.

Rounding turns three and four for the final time Spangler drove to the outside of Fuller, but Fuller slid up just enough off turn four to force Spangler over the wall-less homestretch berm. Fuller beat Spangler to the finish line by less than a half car length as Neiser looked to sneak by both on the inside.

“I had to pass Cat (Smith) up on the top (for the lead) and I used up a little too much tire, but I thought I could stay straighter and smoother up there and keep my momentum up,” said Fuller. “I went back to the bottom because I saw (Neiser) nosing up inside of me.”

Fuller was surprised by the sudden appearance of Spangler as the checkered flag was displayed ahead of them.

“I just thought it was 87 (Neiser),” said Fuller. “As I drifted out toward the outside of the track (off turn four on the last lap) I seen a car right there (Spangler) and we touched a little bit. Good thing it wasn’t 51 laps. That 27 car (Spangler) was fast and my right-rear tire was dying.”

A three-time Merritt Speedway Late Model champion and winner of the track’s recent
‘Wood-Tic’ special event, Spangler was disappointed to fall just short of the biggest victory of his career.

“I got good momentum into three and four (on the last lap) and got alongside (Fuller),” said Spangler, who drove a MasterSbilt car. “But he pushed up – and he’s the leader, so you gotta him some room and we put it off the frontstretch so we didn’t hit.

“It was almost three-abreast on the last lap. I’m sure it was a great show for all the fans.”

Neiser, meanwhile, wore a large smile despite coming so close to becoming the second Michigan driver to win a WoO LMS.

“Two local guys and one of the World of Outlaw guys? That was definitely a spectacular finish,” said Neiser.

Neiser, who started seventh, used the inside groove to work his way to second place by lap 20. He challenged Smith several times midway through the race and did the same to Fuller during the final circuits before Fuller’s lane change stemmed his charge.

“He was up a little higher and I was catching him more and more,” Neiser said of Fuller. “The yellows kind of hurt me a little bit, and when he seen me there he come down (on the last lap) – which anybody would’ve. Then man, by time I went to the top, there was Spangler. I didn’t know he was there, but I figured he would be because he’s fast here.

“When I seen him, I figured, ‘Wow, this is gonna be a race to the end now.’ It was a good time – an amazing time. I was thrilled just to be racing for a win in a World of Outlaws race. That’s probably why I bumped the (inside) tires a couple times here and there. I was getting a little too excited and was missing my marks just thinking, I can’t believe where I’m at right now.”

WoO LMS points leader Josh Richards of Shinnston, W.Va., started and finished sixth, hampered in his efforts to contend for the win by a tire-compound choice that was too hard for the conditions. Chris Brindley of West Branch, Mich., who started from the pole positions, finished seventh in the first WoO LMS A-Main start of his career. Eighth place was claimed by Clanton, ninth went to Merritt veteran David Hilliker of Midland, Mich., and Rick Eckert of York, Pa., rounded out the top 10.

Thirty-five cars were signed in for the event, which was contested in front of a capacity crowd on a gorgeous summer day.

WoO LMS rookie Morgan Bagley of Longview, Texas, registered the overall fastest circuit of the night with a lap of 13.623 seconds in Group ‘A.’ It was his first-ever fast-time honor on the WoO LMS.