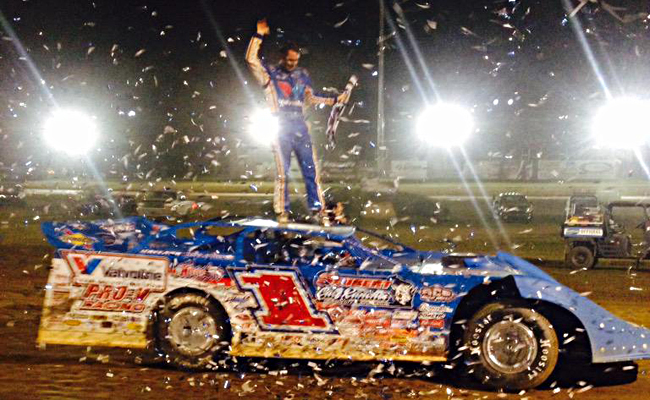 ERIE, Pa. – Aug. 23, 2015 – Josh Richards of Shinnston, W.Va., wrapped up a perfect weekend on the World of Outlaws Late Model Series with a dominating victory in front of a near-capacity crowd Sunday night at Eriez Speedway.

Richards, who opened the national tour’s three-race weekend with victories at Atomic Speedway in Chillicothe, Ohio, on Friday and Saturday, overtook WoO LMS points leader Shane Clanton of Zebulon, Ga., on lap 31 of Sunday’s 50-lap A-Main at Eriez and cruised through the remainder of the caution-free race on his way to his ninth WoO LMS victory of the season and his fifth in the tour’s past six races.

“That was a lot of fun. I love the fans up here and this is an awesome racetrack,” said the 27-year-old Richards, whose third WoO LMS victory at Eriez marked the 58th series win of his career. “I had a lot of fun this weekend. It’s a little surreal, but we’re just gonna keep racing and doing what we love to do.”

Richards’ Valvoline-sponsored Rocket Chassis house car crossed the finish line 4.550 seconds ahead of Clanton, who settled for second in his Weldbank Energy Capital Race Cars house car. Frank Heckenast Jr. of Frankfort, Ill., was third in a Club 29 Race Car with Chub Frank of Bear Lake, Pa., fourth in a Longhorn Chassis and Max Blair of Centerville, Pa., fifth in a Rocket Chassis.

Starting from inside the second row, Richards went by second-starting Heckenast early and chased the polesitting Clanton through the opening laps. Clanton initially pulled away from Richards, but Richards began closing the gap when the two leaders reached traffic just after lap 10.

Richards pressured Clanton through traffic during the follow circuits and edged ahead at times. But it wasn’t until lap 31 that he finally completed the pass and grabbed the lead for good.

Richards cruised from there, knifing his way through traffic in lapping all but the top 12 cars.

“Clanton was really good early,” said Richards, who is now tied with Clanton for the most victories on this year WoO LMS tour. “I think we might have adjusted a little bit too far, and early in the race I was a little bit too free. I had to be really methodical through lapped traffic and try to get through there the best I could.

“The car was really maneuverable. I can’t think my dad (Mark Richards of Rocket Chassis) enough. He’s one of the smartest guys in the industry.”

In settling for second, Clanton kept his string of strong finishes going with his sixth consecutive top-five result and his fourth straight finish of third or better. While he finished second to Richards for the second straight night, he still leads him in the series standings by a comfortable 154-point margin with seven races remaining on the tour’s schedule.

Making his first appearance at Eriez Speedway, Heckenast steadily improved all night after qualifying third fastest in his group and finishing second in his heat race. By the main event, he was well adjusted to the track thanks to its similarities with tracks in his home state.

“This place is pretty awesome,” Heckenast said. “It’s kind of like the tracks back home in Illinois. I think we were the only ones with that left-rear tire on, so I was pretty nervous, but it worked out alright. Josh is on kill right now, so I didn’t really expect to beat him.”

Rick Eckert of York, Pa., was sixth at the finish with Chase Junghans of Manhattan, Kan., seventh. In finishing eighth, Jared Miley of Pittsburgh, Pa., scored his third top-10 finish in three WoO LMS appearances this season. He was followed by Morgan Bagley of Longview, Texas, in ninth and Eric Wells of Hazard, Ky., in 10th.

Richards kicked off the night by setting fast time over the event’s 38 entries with his lap of 15.038 seconds in the second of two qualifying groups. Frank was fastest in the first group at 15.096 seconds. Frank, Junghans, Richards and Clanton won the night’s four heat races, while Greg Oakes of Franklinville, N.Y., and Boom Briggs of Bear Lake, Pa., won the Last-Chance Showdowns.

The WoO LMS takes the upcoming weekend off in preparation for a blockbuster Labor Day weekend in the Keystone State. The tour returns to Lernerville Speedway in Sarver, Pa., for the second annual Working Man 50 on Fri., Sept. 4 ahead of the final night of Lernerville’s $30,000-to-win Firecracker 100, which was rescheduled to Sat., Sept. 5 from a rainout on June 27. The series wraps up the weekend with a visit to Selinsgrove Speedway in Selinsgrove, Pa., on Sun., Sept. 5.