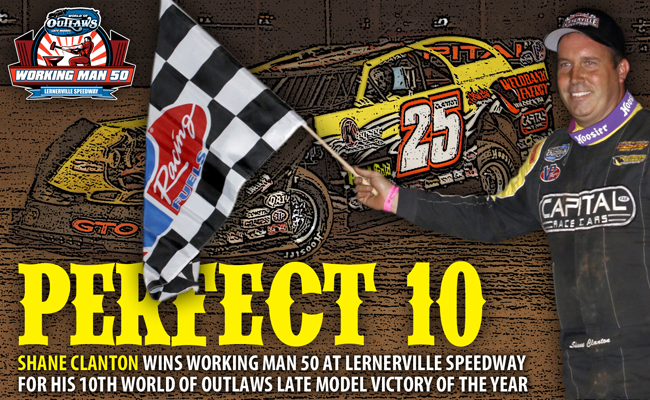 Taking advantage of his position starting spot, Clanton jumped into the lead at the initial green flag and never looked back in his Ron Davies-owned Capital Race Car. He brushed off a mid-race threat from the Josh Richards of Shinnston, W.Va., en route to beating the red-hot Rocket Chassis house car driver by 0.932 of a second.

The $10,550 victory was the 10th of the 2015 WoO LMS for the 39-year-old Clanton, who snapped Richards’s three-race win streak on the national tour. It also ended Clanton’s personal eight-race winless stretch in WoO LMS competition and pushed his career win total to 30.

“Josh was just a little more maneuverable in traffic lately so we just had to work on our race car in race conditions,” said Clanton, who was the runner-up in three of Richards’s five WoO LMS A-Main wins over the six races leading into Friday’s action. “We’ve had speed the past month, but he’s started in front of me most nights and could get through better than I could — and he was just better than I was at Eriez (Speedway in Hammett, Pa., on Aug. 23).

“But tonight I was better than him. I could be aggressive in the race and pass cars whenever I wanted to, and when you got that much confidence in your car it’s fun to drive.”

Clanton’s performance, which extended his already massive WoO LMS points lead to 158 markers over Richards with just six races remaining on the 2015 schedule, was his second of 2015 at Lernerville and provided him a boost of confidence entering Saturday night’s rescheduled $30,000-to-win Firecracker 100.

“Right now everything’s clicking and jelling,” said Clanton, who won the first or two preliminary features for the Firecracker 100 in late June before the big event was postponed by rain. “Our car’s just phenomenal — it showed tonight how good we are on a pretty slick racetrack. If it’s like this (for the 100), we feel good tomorrow night. We got a good starting spot in a heat tomorrow, so if we have Lady Luck on our side maybe we can win another one.”

Richards, 27, hustled forward from the sixth starting to run second behind Clanton by lap six and briefly drew close to the leader after the halfway point. But the three-time WoO LMS champion lost ground to Clanton in the race’s late stages and wasn’t able to mount a serious challenge after caution flags on laps 42 and 48.

“I think we gambled on tires a little compared to the rest of the guys up front,” said Richards, who used softer-compound rubber. “We were just biding our time early and we were gaining on Shane that first two-thirds of the race, but I think once the track cleaned up on that really long green flag run he could maneuver a little bit better with his right-rear tire.

“And then my right-front tire is actually going flat right now,” he added while standing in victory lane after the race. “I don’t know how long it’s been doing that — I got really tight going into the corners, so it was good to come home second. I think it we tweak on it for tomorrow we’ll have a good car.”

Frank Heckenast Jr. of Frankfort, Ill., finished third, advancing from the eighth starting spot to record his career-best run at Lernerville. He reached third place on lap 10 and raced closed to Richards during the A-Main final circuits.

“Josh went a little bit softer on the right-rear and we were a car (length) away from him with like seven or eight (laps) to go so I thought we had a shot at second,” said Heckenast. “I pushed my right-front (tire) off with 20 to go and it was getting really hard to steer, but I haven’t been on this (post-race) stage before so I’m excited.”

Veteran Davey Johnson of Latrobe, Pa., marched forward from the 12th starting spot to place fourth and Rick Eckert of York, Pa., finish fifth after starting in the position but slipping as far back as ninth midway through the race.

Finishing in positions 6-10 were Chub Frank of Bear Lake, Pa.; 16th-starter Brandon Overton of Evans, Ga.; Gregg Satterlee of Indiana, Pa.; Chase Junghans of Manhattan, Kan., who a Firecracker 100 preliminary feature in June; and Paul Wilmoth Jr. of Clarksburg, W.Va., who ran as high as sixth during the race’s first half.

The first two cautions were for stopped cars — on lap five for Kenny Pettyjohn of Millsboro, Del., and lap seven for Matt Lux of Franklin, Pa. A tangle involving Eric Wells of Hazard, Ky., and Michael Lake of Uniontown, Pa., slowed the race on lap eight, and the final two cautions were for drivers who ran into trouble while running fourth — first Alex Ferree of Saxonburg, Pa., who went over the turn-three bank with a flat tire on lap 42, and then Darrell Lanigan of Union, Ky., who clipped the homestretch wall on lap 48 and had to ride a wrecker back to the pit area.

Austin Hubbard of Seaford, Del., was the overall fastest qualifier among 42 entrants in Ohlins Shock Time Trials with a lap of 15.797 seconds.

Heat winners were Frank, Lanigan, Heckenast and Eckert. The B-Mains were captured by Wells and Bump Hedman of Sugar Grove, Pa.

WoO LMS regular Boom Briggs of Bear Lake, Pa., escaped injury when he flipped his car onto its roof during the third heat. He returned later with his backup, used a provisional to start the A-Main and finished 15th.

The WoO LMS’s two-day visit to Lernerville concludes on Saturday night with the running of the ninth annual Firecracker 100. The program includes heat races (lineups determined by drivers’ results in June’s preliminary programs), B-Mains, the Uncle Sam 30 Non-Qualifiers’ Race and the 100-lap feature.