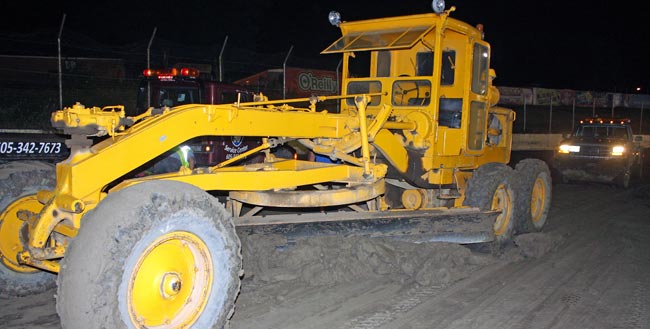 A warm, sunny day took a turn for the worse around 5:30 p.m. MT when black clouds that had been threatening the sprawling half-mile oval began to produce precipitation. While severe thunderstorms avoided the speedway to the south, a half-hour’s worth of moderate rain soaked the racing surface.

After nearly three hours of the track crew working on the speedway and Street Stocks helping to pack the surface, officials called the Late Models out to attempt a hot-lap session around 9 p.m. MT. The track was extremely greasy and rough – lap times were more than two seconds off those turned in qualifying for last year’s WoO LMS event at Black Hills – so officials brought out the motor-grader in hopes of making the speedway suitable for safe and competitive racing.

But with the moisture that continued to come up through the surface hampering the track work and the clock approaching 10:30 p.m. MT, track and series officials agreed that all options had been exhausted and the event was canceled. Moments later a thunderstorm deluged the speedway, making the call a moot point.

All ticketholders for the event can receive full refunds. More information will be available at www.black-hillsspeedway.org.