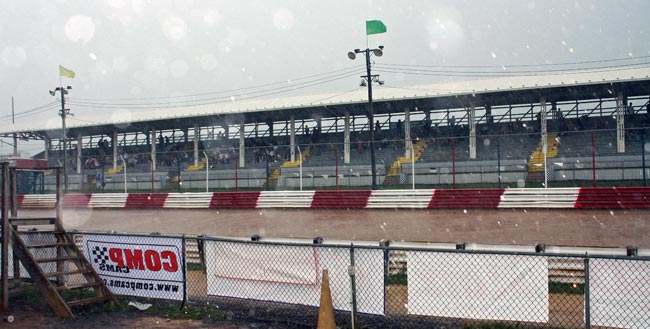 Forty-two cars were unloaded in the pit area and ready for action when the skies darkened and ultimately unloaded on the sprawling half-mile oval, prompting Selinsgrove promoter Charlie Paige to call off the evening’s Jeff’s Auto Body & Recycling 50.

With no suitable date available on the WoO LMS schedule for a return to Selinsgrove this season, Paige and WoO LMS officials will look to the 2013 season to present the national tour’s first-ever race at the speedway.

The rainout was the second in as many nights for the WoO LMS, which had its Saturday-night event at Winchester (Va.) Speedway canceled due to wet weather.

The WoO LMS will be back in action on Wednesday night (Aug. 29) at Little Valley (N.Y.) Speedway.

6:10 p.m. – Selinsgrove officials have made the decision to cancel tonight’s racing program due to the heavy rain that just struck the facility, creating the second rainout in as many nights for the suddenly weather-hampered WoO LMS.

Unfortunately, with no suitable date available on the WoO LMS schedule for a return visit this year, Selinsgrove and WoO LMS officials will look to 2013 to present the tour’s first-ever race at the half-mile oval.

6 p.m. – Storms that have been threatening throughout the day have arrived. The skies became increasingly dark over the last hour, and about 10 minutes ago the wind picked up and rain began falling. A heavy shower is now hitting the track.

The program is currently in a holding pattern as officials check the radar and consider options.

5:35 p.m. – There was no racing last night at Winchester Speedway because of the weather, but it was still a bad evening for WoO LMS regular Vic Coffey.

Coffey and his Sweeteners Plus Racing teammate, Tim McCreadie, learned of the cancelation just as they approached the speedway’s exit off Interstate 81, so they simply drove off the highway and got back on northbound to head for Selinsgrove. But “as soon as we started up the ramp to get on 81,” said Coffey, “we heard a noise (from the truck).”

Coffey and Co. stopped their rig on the highway entrance ramp to check out the situation and called the Sweeteners Plus truck shop for some additional guidance. They were told to see if they could get the truck and trailer to the next exit a mile up the road for further inspection, so they climbed back in and began rolling.

“We didn’t make it a quarter mile up the road and the turbo blew,” said Coffey. “When (truck driver) Mike (Hover) eased to the shoulder and let off the gas pedal, the engine just stayed running wide open. The best we can tell is, when the turbo blew, that apparently blew the seals out of the turbo and let the oil start going directly in the engine. When that happened, the engine started running directly off the oil and wouldn’t shut off.

“We turned the key off, shut the fuel valves off, and it just would not stop running. It basically just sat there free-wheelin’, and because the engine was running the oil pump was turning so it just pumped every bit of oil that was in the engine – it holds like 40 quarts – and the engine wouldn’t shut off until it burnt it all off. Eventually it shut off, but the problem is, it probably killed everything inside the engine.”

The roaring, oil-fed Caterpillar engine in the semi-truck also created quite a scene on Interstate 81. With thick, dark smoke pouring out of the truck’s pipes, traffic backed up for miles behind the Sweeteners hauler.

With another plan to get Coffey’s trailer to Selinsgrove now necessary, Coffey’s crewman, Matt McCrimmon, jumped into McCreadie’s truck and rode to Selinsgrove with McCreadie and his mechanic Craig McCrimmon (Matt’s brother). Coffey stayed behind to wait for a tow truck to pick up his truck and trailer.

McCreadie’s rig arrived at Selinsgrove Speedway around 6 p.m. and they unhooked the truck from the trailer in the parking lot. Craig McCrimmon then drove back to Winchester to pick up Coffey and Coffey’s trailer, arriving at the trucking company where Coffey had been towed around 9 p.m. They were back in Selinsgrove with Coffey’s trailer by midnight.

Another semi-truck from the Sweeteners Plus fleet was sent down from New York today to hook up to McCreadie’s trailer in the Selinsgrove parking lot.

This was the second consecutive year that Coffey experienced truck problems on a WoO LMS road trip. Last year transmission problems led to a tow during the Wild West Tour.

“Somebody reminded me that on that western trip last year we left home and were four or five hours down the road when I realized I had forgotten my cell phone,” said Coffey. “I forgot my cell phone yesterday and we broke down again. It’s like a bad omen.

“Next time I forget my cell phone we’re turning around. I don’t care if we’re five hours or five minutes from home.”

Competitors are now in the process of crossing back into the infield pit area after signing in.