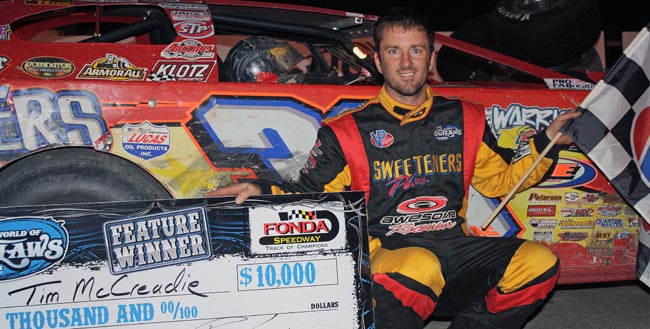 The 39-year-old Big-Block-turned-Dirt Late Model star dominated the caution-free event in his Sweeteners Plus Warrior car, racing off the pole position to lead from start-to-finish. He was never seriously challenged en route to his third triumph of 2013 on the national tour.

McCreadie’s $10,650 win was the third of his career at the uniquely-shaped half-mile Fonda oval, but his previous two scores came in 2003 and ’04 in Big-Block Modified features. Wednesday night marked his first-ever start at the track in a dirt Late Model.

Dan Stone of Thompson, Pa., started on the outside pole and chased McCreadie for the entire distance but never got close enough to mount a bid. He steered his family-owned Rocket machine under the checkered flag 0.994 behind McCreadie.

McCreadie was at his best when it counted. He shook off a frustrating – albeit still effective – heat-race performance to shine in the headliner.

“We weren’t so good early,” said McCreadie, who nevertheless finished second in his heat race to make the redraw for the A-Main’s top-six starting spots. “In the heat I felt bad, but it just made me go to work on my stuff. We made the Warrior car a lot better for the feature than what it was in the heat – and drawing the pole helped too.”

Making a rare start with his father – legendary DIRTcar Big-Block Modified driver ‘Barefoot’ Bob McCreadie, who owns four career special-event victories at Fonda – in attendance, T-Mac surged into the lead at the initial green flag of the 50-lapper and never looked back. He calmly handled several bouts with lapped traffic to keep Stone at arm’s length.

“We were running just trying to be smooth and keep the tires under the car – not wheel-spin ’em, because when it’s slick like that you can kill your edges,” said McCreadie, who recorded his 23rd career victory on the WoO LMS.

McCreadie enjoyed a Victory Lane family photo with his father and younger brother Jordan and savored a triumph that was well-received by his home-state fans.

“I do really love racing in New York state,” said McCreadie, who moved back past fellow Big-Block Modified transplant Tim Fuller of Watertown, N.Y., for fifth place in the WoO LMS points standings. “When you’re running bad it’s 10 times worse because everybody expects you to be up front, but when you run good it’s a relief as much as it is excitement.

Stone, 36, kept McCreadie in his sights throughout the race but couldn’t summon enough power to mount a major run at the top spot.

“I think we were pretty even speed-wise,” said Stone, who has two career WoO LMS victories. “There were a couple bounces (holes) in the turns and once in a while (McCreadie would) hit ’em wrong and he’d get held up and I’d close in, but then I’d get greedy and hit the bumps a little bit wrong (and lose ground).

“I’m not ashamed to lose to Tim in New York. He’s got a few laps around and he’s good in this (slick) condition too.”

Decker, 48, was satisfied with a podium finish in what was his first dirt Late Model appearance of 2013.

“I think the Gypsum Wholesalers car was a little better than I was tonight,” said Decker, who has two career Big-Block Modified wins at Fonda. “I kept missing the line in (turns) one and two. I know when I hit it I was as good as anybody, but I missed it more than I hit it.

“I need to get a little bit better, but all in all I’m tickled to death. I had a lot of fun tonight.”

Finishing in positions 6-10 was Shane Clanton of Zebulon, Ga.; Chub Frank of Bear Lake, Pa., who slipped backward at the start from his fifth starting spot; Bub McCool of Vicksburg, Miss.; Clint Smith of Senoia, Ga.; and Josh Richards of Shinnston, W.Va., who had a quiet night and saw his WoO LMS points lead shrink to 26 points over Clanton.

Eckert topped the evening’s 24-car field in Ohlins Shocks Time Trials, turning a lap of 18.784 seconds for his first fast-time honor of 2013.

Heat winners were Eckert, Frank and Stone. No B-Main was run.

Former Fonda Big-Block Modified champion Ronnie Johnson of Duanesburg, N.Y., authored a respectable dirt Late Model debut behind the wheel of Frank’s second car. He timed sixth-fastest – just a tick off Frank’s clocking – and finished fourth in his heat before retiring from the A-Main on lap 10 and being credited with a 21st-place finish.

The WoO LMS swing through the Northeast continues on Thursday night (June 20) with a first-ever visit to Brighton (Ont.) Speedway for the Excel Tower Service 50.

FONDA, NY – June 19, 2013 – After an 18-day hiatus the World of Outlaws Late Model Series returns to action tonight with a first-ever visit to Fonda Speedwaty.

A historic Big-Block Modified track that sits about 40 minutes Northwest of Albany, N.Y., Fonda is an egg-shaped half-mile oval that features an old-style covered grandstand on the frontstretch.

9:55 p.m. – Tim McCreadie dominated the 50-lap A-Main, leading the caution-free event from start-to-finish off the pole position to register his third WoO LMS triumph of 2013.

A winner at Fonda twice previously in Big-Block Modified competition a decade ago, McCreadie wasn’t seriously challenged in a race that was completed in 17 minutes, 37.435 seconds. Dan Stone chased McCreadie throughout the distance and finished second, with Billy Decker taking third, Eric Wells fourth and Rick Eckert fifth.

8:40 p.m. – With the 30-lap Big-Block Modified feature now on the track, WoO LMS teams are making final preparations for the 50-lap A-Main. Tim McCreadie, who has two career Big-Block Modified wins at Fonda, drew the pole position for the headliner.

The eight-minute horn to line up the A-Main will be blown halfway through the Big-Block Modified feature.

8:05 p.m. – Rick Eckert, Chub Frank and Dan Stone were victorious in the three 10-lap heat races. The top-two finishers from each are headed to Fonda’s Checkeredboard Square for the A-Main redraw.

Notable was the lap turned in by Fonda Big-Block Modified regular Ronnie Johnson, who clocked sixth-fastest at 19.566 seconds to earn an outside-pole starting spot in tonight’s third and final heat race. He was a tick behind his car’s owner, Chub Frank, who turned a lap of 19.561 seconds.

Complete results from time trials can be found here.

On a surface that was evolving as the hot-lap session went on, Billy Decker was second-fastest at 17.805 seconds in a brand-new Gypsum Express Rocket car. Eric Wells was third-fastest (17.894), followed by Dan Stone (18.046) and Rick ‘Boom’ Briggs (18.100). First-time dirt Late Model runner Ronnie Johnson clocked in 15th-fastest at 19.172 seconds.

Ohlins Shocks time trials will be getting the green flag momentarily….

Hoping for a better run

6:45 p.m. – WoO LMS rookie Eric Wells has visited Fonda twice before, in 2010 and ’11 when the Lucas Oil Late Model Dirt Series ran at the track. Ask him how he fared in those shows, however, and you get an interesting response.

“Let me get my notes (from his previous visit),” said Wells. “I’ll show you.”

After going into his trailer and grabbing a spiral notebook that contains various setup notes he jots down at all his events, Wells found the page with information from his ’11 appearance at Fonda. There were no words, but there was a picture he drew to describe his outing.

“When I’m as bad as I was that night,” said Wells, “I don’t even have to write down any notes. This picture pretty much describes how our night went.”

The photo of the illustration Wells drew to sum up his Fonda run is below — and quite self-explanatory.

6:30 p.m. – Chub Frank has spent much of his time since arriving at the track giving Fonda Big-Block Modified standout Ronnie Johnson of Duanesburg, N.Y., a crash course in dirt Late Model racing. The two are pictured below (Ronnie at right) chatting near Johnson’s Modified pit stall.

The 2011 Fonda Big-Block Modified champion, Johnson, 39, headed over to Frank’s trailer shortly after the Pennsylvanian’s arrival and climbed into Frank’s No. 1* to get comfortable in the seat.

“It’s definitely different than a Modified,” said Johnson, who owns 22 career Big-Block Mod wins at Fonda. “It’s gonna be interesting to see how it feels out there.”

Johnson is the son of DIRTcar Big-Block Modified legend Jumpin’ Jack Johnson, who is Fonda’s alltime winningest driver. Jumpin’ Jack, who hasn’t raced since beginning to suffer from the effects of a muscular disease several years ago, was hoping to attend tonight’s program to watch his son make his dirt Late Model debut (and compete in the supporting Big-Block Modified show), but he is currently being treated in a local hospital for health problems related to his muscular condition. Ronnie took his father in for medical treatment yesterday and stayed up most of the night, so he’s “running on just about no sleep tonight,” he said.

Ronnie actually thought about skipping tonight’s racing altogether to stay with his father, but Jumpin’ Jack — ever the racer — would have none of it. “He said, ‘You go race,'” remarked Ronnie, who hopes to lift his dad’s spirits with a pair of strong outings tonight.

5:55 p.m. – The pit area has come to life as tonight’s 24-car WoO LMS field begins readying for hot laps on the quirky Fonda layout, which has produced many looks of wonder from the dirt Late Model standouts who are seeing it for the first time.

“It’s hard to tell how many straightaways there are at this place,” WoO LMS star Rick Eckert said after eyeballing the track. “There’s short-chutes, extra turns. It’s definitely a weird shape.”

The track’s backstretch also runs parallel to the Mohawk River, which can be seen on the left side of the photo below (racetrack at far right). Just jersey barriers and a row of trees and bushes separate the track surface from the river, which has seen several cars reach its water over the years.

One driver, in fact, who once flipped his Big-Block Modified into the drink is DIRTcar legend ‘Barefoot’ Bob McCreadie, the father of WoO LMS traveler Tim McCreadie. Bob, who is here tonight watching his son in action, escaped injury when he ended up in the water during a Fonda 200 weekend nearly two decades ago.

4:55 p.m. – With temperatures in the high 70s and the sun shining through patches of puffy white clouds, today’s weather just might be the best there’s been for any WoO LMS event this season.

Haulers are still rolling through the pit gate, but already set to go are all 11 WoO LMS regulars plus such drivers as Billy Decker, Larry Wight, Dan Stone, John Mason, Rick ‘Boom’ Briggs and 2011 Fonda Speedway Big-Block Modified champion Ronnie Johnson, who is scheduled to make his dirt Late Model driving debut behind the wheel of Chub Frank’s second car.

The drivers’ meeting is scheduled for 5:30 p.m. with hot laps set to begin a half-hour later, so things will soon be ramping up here.