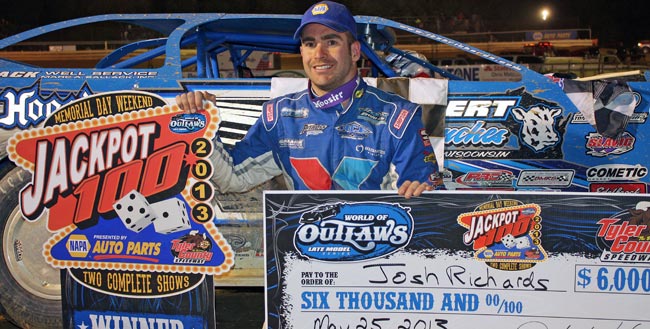 The 25-year-old superstar from Shinnston, W.Va., pulled off one of the most dramatic triumphs of his career on Saturday night, passing Tim Fuller of Watertown, N.Y., on the final circuit of the 30-lap World of Outlaws Late Model Series A-Main that kicked off the Jackpot 100 Presented by NAPA Auto Parts weekend at Tyler County Speedway.

Richards beat Fuller to the finish line by a mere 0.154 of a second for a win worth $6,150. It was the third WoO LMS victory of the season for the tour’s two-time champion and current points leader, who happily tasted success in his native Mountaineer State for the first time in his 10 years as a dirt Late Model driver.

“It’s cool to finally get one in front of the home crowd,” said Richards, whose appearances at tracks in West Virginia have been limited during a career focused on national touring. “It’s been pretty hard to do. I think we counted up in 10 years we only raced in the state seven or eight times.”

Fuller, 45, was a disappointed runner-up after starting from the outside pole position and leading laps 14-29. It was his best finish of the 2013 WoO LMS campaign, but his winless streak on the tour reached 113 races since he last reached Victory Lane on June 17, 2010, at Merrittville Speedway in Thorold, Ont.

Darrell Lanigan of Union, Ky., battled forward from the 10th starting spot to finish within striking distance of the leaders in third place. Rick Eckert of York, Pa., started and finished fourth and Shane Clanton of Zebulon, Ga., salvaged his night with a hard-fought advance from the 22nd starting spot to fifth place.

Richards, who started eighth after picking the worst pill in the A-Main redraw, caught some breaks on his way to the checkered flag. Most notably, he gained valuable track position when Tim McCreadie of Watertown, N.Y., who started from the pole and authoritatively led the race’s first 13 laps, relinquished the top spot during a lap-13 caution period due to a flat right-front tire and, during another caution two circuits later, Steve Casebolt Jr. of Richmond, Ind., gave up second place because his car’s driveshaft broke.

“I know McCreadie had a flat and Casebolt broke,” said Richards, who recorded his 42nd career win on the WoO LMS. “We lucked into a few spots. I don’t know if we could’ve got by them.”

Left in second place after Casebolt’s misfortune, Richards spent the final 15 caution-free laps chasing Fuller, who inherited the lead when McCreadie headed pitside for a tire change. Fuller maintained an edge of just under one second until lap 25, when Richards began cutting the gap by about a tenth of a second per circuit.

Richards drew close enough to challenge Fuller heading to the white flag. Fuller led the 29th lap by a scant margin, but he couldn’t stay ahead for one more trip around the quarter-mile oval. Richards charged to the inside of the track rounding turns three and four for the final time, slid ahead of Fuller off the race’s last corner and outran the New Yorker to the checkered flag.

“If we would’ve stayed away from lapped traffic he would’ve won,” Richards said of Fuller. “He was out in clean track and he could pick some speed up, so it was hard to gain any ground. I just kept watching the lapped cars and watching the dirt off their tires and tried to stay low.

“Once we got a run there (on the last lap) I just had to go for it. I tried to do it one last corner and it finally worked out.”

Fuller was left shell-shocked by the heartbreaking defeat. He struggled to describe the final-lap turn of events during a post-race interview in front of the crowd.

“He banzaied it in there and he slid me. That’s the end of it,” Fuller said of Richards. “I felt like we had a pretty good car, but all you need is one banzai run at the flag – hey, that happens.”

After returning to his trailer, Fuller provided more insight into the race’s deciding moment. He said that with the race’s frenetic pace, he didn’t realize that the checkered flag was flying when Richards made his aggressive, last-ditch bid for the win.

“He slid me and made it work because I was courteous,” said Fuller. “It could’ve been a more controversial outcome, but didn’t think it was the last lap so I actually thought I could get him back. I thought I had a good enough run to do the same thing to him that he did to me, just through (turns) one and two.

“I never saw the checkered flag, and we still raced another whole lap. I’d thought I (regained the lead and) won. I had no clue. I didn’t realize the race was over after he passed me until I heard (WoO LMS race director) Bret (Emrock) on the (one-way) radio one lap later.”

Four caution flags slowed the event. Jacob Hawkins of Fairmont, W.Va., fell off the pace on lap nine, and on the restart moments later Davey Johnson of Latrobe, Pa., suddenly slowed on the backstretch while running third, causing several cars to make contact with Johnson and each other in the chain-reaction jam-up. The final cautions were thrown after contact with other cars led to spins by WoO LMS regulars Clint Smith of Senoia, Ga. (lap 13) and Scott James of Bright, Ind. (lap 15).

A red flag was also needed on lap nine after Johnson pulled his car to a stop on the inside of turn three and summoned medical attention. He complained of pain in his left wrist after his hand jammed into his car’s steering wheel as his powerless machine was hit from behind.

Johnson had an ice pack wrapped on his left wrist as he helped load up his car following the night’s action. He said he was heading home and would visit a doctor there for further treatment.

A field of 34 cars was signed in for the first night of the Jackpot 100 by NAPA.

Ohlins Shocks Time Trials were split into ‘A’ and ‘B’ groups, with the first half competing for starting positions in heats one and two and the second half racing against the clock to align heats three and four. James registered the fastest overall lap of the evening at 13.109 seconds to earn his first WoO LMS quick-time honor of 2013, while Richards topped Group ‘B’ with a circuit of 13.137 seconds.

Heat winners were James, Fuller, Richards and Smith. The B-Mains were captured by Benedum and Butch McGill of West Union, W.Va.

2013 World of Outlaws Late Model Series Point Standings as of May 25 – 15 A-Mains completed (rank/driver/points/deficit to leader):