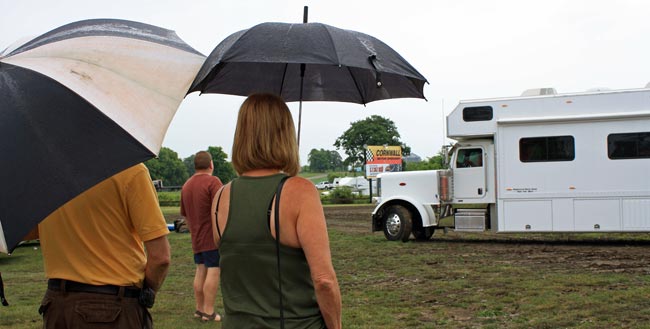 More than 20 dirt Late Models were already on hand and more were waiting to enter the pit area when precipitation began about 3 p.m. Cornwall owner Ron Morin made the decision to call off the night’s program after rain fell steadily for an hour and radar indicated that there was little hope of substantial clearing for the remainder of the evening.

“We were definitely looking forward to bringing the World of Outlaws Late Model Series back to Cornwall Motor Speedway after a one-year absence but the weather conditions just wouldn’t allow it,” said tour director Tim Christman, who added that there are no plans at this time to reschedule Cornwall’s event this season. “Unfortunately, it appears that fans will have to wait until 2013 to see the World of Outlaws Late Model Series put on another exciting show at Cornwall.”

Sunday’s event was slated to cap a Canadian doubleheader for the WoO LMS, which competed on Friday night at Quebec’s Autodrome Granby. Tim McCreadie of Watertown, N.Y., won the circuit’s first-ever race at the half-mile oval.

A total of 18 WoO LMS A-Mains were completed this season before the first rainout occurred.

The WoO LMS will continue its Northeast swing on Tuesday (June 26) with a 40-lap, $8,000-to-win event at Canandaigua (N.Y.) Motorsports Park and the sixth annual Firecracker 100 presented by GottaRace.com on June 28-30 at Lernerville Speedway in Sarver, Pa.