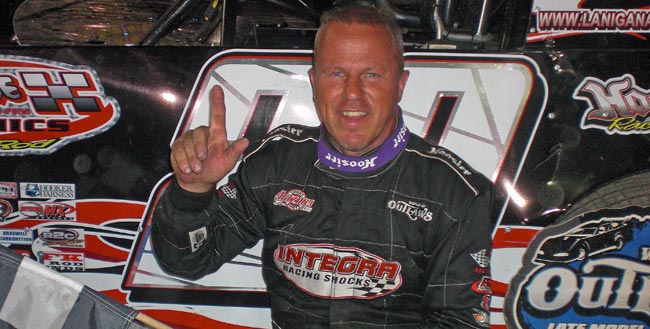 Completing a spectacular road trip to the Upper Midwest, Lanigan registered a convincing victory in the ‘Mid-States Equipment 50’ to extend his record-setting win streak to six and become the national tour’s alltime winningest driver.

Lanigan, 42, of Union, Ky., roared off the outside pole to grab the lead on the opening lap and never looked back, pacing the entire distance to register his 13th win of 2012 and the 39th of his career on the WoO LMS. He overtook Josh Richards and Billy Moyer to move atop the national tour’s career win list for both the modern era (2004-present) and overall (including the original 1988-89 seasons).

“It’s unbelievable,” said Lanigan, who captured Shawano’s WoO LMS event for the second consecutive year. “It’s a real honor to be at the top of that (alltime win) list. It means a lot.”

Lanigan dominated the A-Main, keeping his rivals at arm’s length throughout behind the wheel of his Cornett-powered Rocket. WoO LMS rookie Bub McCool of Vicksburg, Miss., was able to close within a car’s length of Lanigan late in the distance, but he couldn’t make a serious bid and crossed the finish line 0.214 of a second behind the victor in his Victory Circle mount.

Tim Fuller of Watertown, N.Y., briefly grabbed second from McCool on a lap-15 restart but settled for a third-place finish. It was his best outing since moving to the seat of the Kennedy Motorsports Capital Race Car.

Lanigan led by nearly a straightaway early in the race, but he cooled his jets as the A-Main wound down to make sure tire wear wouldn’t hamper his effort.

“I know last year there was some cars that blew out tires late in the race, so I was just trying to be conservative there at the end and finish,” said Lanigan. “Anytime you get to lapped traffic when it’s rubber, you don’t want to catch ’em. I was just trying to slow the pace down a little bit.”

“I felt the longer the race run under green, we was getting better and better and I could get to (Lanigan) a little bit,” said McCool, who registered his seventh top-five finish of the 2012 WoO LMS campaign. “But I don’t know if could’ve gotten by him. Hell, he was right down around that bottom in the rubber and it would’ve been hard to do anything.

“But with our last few finishes, we’re happy with anything in the top five. It was a good night for us.”

Lanigan’s $10,650 win put a put a cap on his perfect – and very lucrative – three-race WoO LMS swing. He began the trip on Aug. 4 with a $50,000 triumph in the USA Nationals 100 at Cedar Lake Speedway in New Richmond, Wis., and then outdueled Clint Smith of Senoia, Ga., to win Monday night’s 50-lapper at Independence (Iowa) Motor Speedway.

The checkered-flag hat trick was worth $71,350 and pushed his WoO LMS earnings for the 2012 season to an astounding $269,400 after just 30 races. He also extended his points lead to 170 points over Eckert as he chases his second career championship with 12 races remaining on the schedule.

Tim McCreadie of Watertown, N.Y., finished sixth after his attempts to make time on the outside of the track on the lap-30 restart caused him to fall out of the top five. Frankie Heckenast Jr. of Orland Park, Ill., was seventh; Jimmy Mars of Menomonie, Wis., quietly moved forward from the 15th starting spot to place eighth; Vic Coffey of Caledonia, N.Y., finished ninth despite switching to a backup ignition halfway through the race and running the last 10 laps on seven cylinders; and Shane Clanton of Fayetteville, Ga., advanced from 18th to round out the top 10.

The race’s most significant casualties were polesitter Chub Frank of Bear Lake, Pa., who relinquished second place due to a broken rearend on lap three; Clint Smith of Senoia, Ga., who spun out of 10th place on lap 30 due to a broken j-bar bolt; and rookie Kent Robinson of Bloomington, Ind., who retired after cutting a right-rear tire while running fifth on lap 40.

Thirty-seven cars were signed in for the event, which was run on brilliantly clear summer evening. The race had been postponed by wet track conditions following a thunderstorm on its original Aug. 1 date.

Fuller was quickest in Ohlins Shocks Time Trials with a lap of 20.151 seconds, earning his third fast-time honor of the 2012 season but first since joining the Kennedy Motorsports team.

Heat winners were Fuller, Eckert, Lanigan and McCreadie. The B-Mains were captured by Paul Parker of Kaukauna, Wis., and Clanton.

The next action for the WoO LMS is a Michigan doubleheader on Aug. 17 at Winston Speedway in Rothbury and Aug. 18 at Merritt Raceway in Lake City.

SHAWANO, WI – Aug. 7, 2012 – Six days after being unable to race because the track surface couldn’t be dried out following a late-afternoon thunderstorm, the World of Outlaws Late Model Series is back at Shawano Speedway tonight for another attempt to run off a 50-lap, $10,000-to-win event.

A sprawling half-mile fairgrounds oval about 45 minutes northwest of Green Bay, Shawano has hosted the WoO LMS in each of the past two seasons. Last year’s race was won by Darrell Lanigan, who will bid to extend his new tour consecutive-win record to six.

11 p.m. CT – Darrell Lanigan continued to dominate the WoO LMS, leading every lap of the A-Main to record his record sixth consecutive win.

Bub McCool drew within a car length in the closing laps, but Lanigan stepped it up and held the Mississippi rookie at bay to win by 0.214 of a second.

9:35 p.m. CT – After Paul Parker and Shane Clanton scored B-Main victories, the eight-minute horn to line up the 50-lap A-Main has just been blown.

9:10 p.m. CT – After the A-Main redraw, Chub Frank will start from the pole position in the 50-lapper as he seeks to snap a 112-race winless streak on the WoO LMS.

But there’s some bad news for ‘Chubzilla’ and his fellow racers. The driver who drew the outside pole is none other than Darrell Lanigan, who will bid to for his sixth straight victory on the tour. With a win, Lanigan can also snap a tie with Josh Richards and Billy Moyer to become the winningest driver of alltime on the WoO LMS — of the modern era (2004-present) as well as overall (including the original 1988-89 seasons).

The first of two 12-lap B-Mains (qualifying three drivers each) is now on the racetrack. The last-chance events will be followed immediately by the A-Main.

8:45 p.m. CT – Tim Fuller remained perfect on the night, winning the first of four 10-lap heat races by 0.877 of a second over WoO LMS rookie Kent Robinson. Other heat victors were Rick Eckert, Darrell Lanigan and Tim McCreadie, while the other runners-up (also going to the A-Main redraw) were Brady Smith, Bub McCool and Chub Frank.

Once again, Lanigan put up the biggest heat-race margin of victory, defeating McCool by a commanding 5.424 seconds. Eckert won by 3.250 seconds and McCreadie’s was triumphant by 3.880 seconds.

There were no major fireworks during the heat, other than Clint Smith demonstratively shaking his fist at fellow Georgian Shane Clanton. Obviously feeling that Clanton got into him a bit rougher than he should have during the fourth heat, Smith stuck his left arm out the window of his car and shook it hard to express his displeasure — while racing at speed down the long homestretch.

8 p.m. CT – Tim Fuller has been pretty quiet in his first four starts since joining the Kennedy Motorsports team — including a DNQ in Saturday night’s USA Nationals at Cedar Lake Speedway — but he showed life tonight by turning the quickest lap in Ohlins Shocks Time Trials. His lap of 20.151 seconds nipped Brady Smith by a mere three-thousandths of a second.

The fast time was Fuller’s third of the 2012 WoO LMS campaign, but he’s hoping to stretch his success over the length of the night. He’s winless on the WoO LMS since June 2010.

Fuller picked up a $100 bonus for his fast time from race sponsor Mid-States Equipment, whose owner, Jim Gummerson, congratulated Fuller in a ceremony on the frontstretch (photo below). Fuller’s qualifying effort prevented Gummerson from greeting Smith, who carries sponsorship from Mid-States Equipment.

7:10 p.m. CT – Darrell Lanigan is setting the bar high again tonight, turning the fastest lap in practice at 19.586 seconds. The red-hot racer was nearly three-tenths of a second quicker than Jimmy Mars, who was second on the speed chart at 19.844 seconds.

6:35 p.m. CT – When last Wednesday evening’s WoO LMS here was postponed to tonight, it put a kink in the plans of every WoO LMS traveler. But no one has felt repercussions from the postponement like Shane Clanton, who has had a monkey wrench thrown into his very big week.

Clanton, you see, is getting married to Michelle Davies, the daughter of western Pennsylvania dirt Late Model veteran Ron Davies, this Friday morning on a beach in Panama City, Fla. Shane and Michelle and supposed to be in Panama City tomorrow to get their marriage license, so they were planning to fly back this morning from Chicago O’Hare International Airport, after Clanton ran last night’s event at Independence Motor Speedway.

The Shawano rainout, however, forced Clanton and his soon-to-be-wife to make new arrangements. Michelle did fly back to Atlanta this morning, but she changed her flight to Milwaukee so Clanton could drop her off without driving his Kennedy Motorsports hauler too far out of the way. Shane will fly home tomorrow morning at 6, also from Milwaukee, which is just under a three-hour drive from Shawano; he’ll drive his hauler to the Milwaukee airport and then get out to hop on a plane, leaving the rig in the hands of his chief mechanic, Jonathan (Dumplin’) Owenby, who will steer it to Frankie Heckenast Jr.’s suburban Chicago shop and park it there for the next week. Owenby is flying to Georgia to attend the wedding, and then he’ll fly back to Chicago next week to work on the team’s cars at Heckenast’s place in preparation for the WoO LMS doubleheader in Michigan on Aug. 17-18.

Clanton and his bride will spend a few days honeymooning in Panama City before they return to the WoO LMS in Michigan as a married couple.

There’s certainly a large group of racers gathered to listen in — 37 cars are signed in for tonight’s action. The first race cars are scheduled to hit the track at 6:30 p.m. CT.

5:15 p.m. CT – After last Wednesday night’s WoO LMS show here at Shawano was postponed because track crews simply couldn’t whip the drenched racing surface into shape for action, many doomsayers were predicting that the car count would drop off precipitously for tonight’s rescheduled date. There were nearly 40 cars on hand before last Wednesday night’s postponement.

Well, those critics — some of whom were even out there predicting that “only five or six” of the World of Outlaws regulars would return tonight — appear to be eating some crow. All 12 WoO LMS travelers are ready to race — in fact, they were all in the pit area working on their cars by 1 p.m. CT after making the five-and-a-half-hour overnight haul from Independence (Iowa) Motor Speedway — and they’re joined by a solid group of regional and local challengers that have tonight’s field already in the mid-30s.