• Lanigan Shines At Eriez For Sixth Win Of ’11 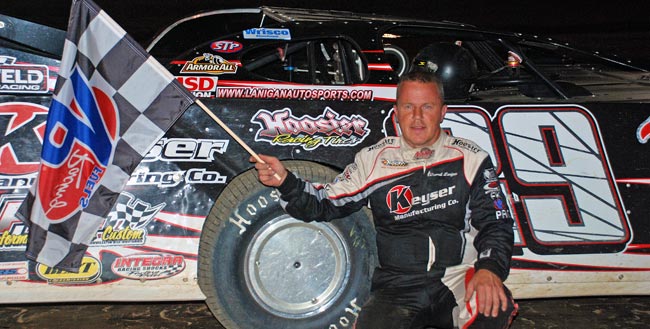 The 2008 WoO LMS champion led from start-to-finish to register his first-ever victory at the one-third-mile oval outside Erie. He drove away from Josh Richards of Shinnston, W.Va., following a late-race restart en route to his series-leading sixth win of the 2011 season behind the wheel of his self-owned GottaRace.com Rocket car.

“Eriez is not one of my better tracks, but the car was awesome tonight,” said the 41-year-old Lanigan, who earned $10,775 for his efforts. “Getting to draw the front row (outside pole starting spot) definitely helped out, but the car was unbelievable. We did a few things different than we usually do here and it worked.”

The checkered flag was Lanigan’s second of the national tour’s month-ending tripleheader in the Keystone State. He also won on July 26 at Dog Hollow Speedway in Strongstown, Pa. – a race that was the milestone 300th contested on the WoO LMS since 2004.

Richards, 23, hustled his father Mark’s Rocket Chassis house car forward from the fifth starting spot to second by lap 23. But after overtaking Shane Clanton of Fayetteville, Ga., for the runner-up slot his ascension effectively stalled thanks to a faulty spark plug wire, leaving him 0.990 of a second behind Lanigan at the finish line.

Clanton, who started from the pole position, settled for a third-place finish in his RSD Enterprises Rocket mount. Tim McCreadie of Watertown, N.Y., advanced from the 14th starting position to place fourth in a Victory Circle machine and his Sweeteners Plus teammate Vic Coffey of Caledonia, N.Y., completed the top five in a Rocket.

Lanigan, whose pair of Pennsy victories sandwiched a ninth-place finish on July 27 at McKean County Raceway in East Smethport (he went to the rear of the field after clipping the wall and sliding to a stop between turns one and two), outgunned Clanton for the lead at the initial green on Sunday and never looked back. He was well aware that Richards was lurking in second throughout the race’s second half but figured it would take a spectacular move for his young rival to unseat him.

“I knew (Richards) was back there, but I didn’t where he was,” said Lanigan, who registered his 25th career win on the WoO LMS. “I knew if anyone did pass me on the outside, he was gonna have a helluva ride out there. It got dirty out there and it was hard to get anything going, so I didn’t see how anybody could pass me out there.

“I just kept running the same line I did the whole race. I wasn’t gonna get off the bottom unless I had to.”
{vimeo}27137771{/vimeo}
Richards managed to come within inches of Lanigan’s right-rear quarter-panel when he lunged into turns one and two following the race’s third-and-final restart, on lap 41, but that was as close as he got to the lead.

“We gave it all we had,” said Richards, who was shooting for a second consecutive WoO LMS victory after winning the ‘Penn Gold 40’ at McKean County. “We had a real good car, but we broke a plug wire and I couldn’t quite get the car loaded (through the corners) like we needed to. The motor would just stumble and I’d lose that little extra bit of ground when I needed to be on the gas and going.

“I really feel like if we could’ve run a clean line we would’ve had a good shot to win the race, but we’re happy with second. Darrell and his guys did a great job and deserved to win.”

Clanton, 35, recorded just his second top-five finish in 21 WoO LMS starts this season. He got back on track after back-to-back frustrating finishes at Dog Hollow and McKean County.

“We worked pretty hard this week,” said Clanton, who decided to pull out his Rocket car for Sunday’s action after struggling with his Capital Race Car in the other Pennsylvania events. “We wanted to go racing Friday and Saturday but we didn’t. We took some time off to try and concentrate on this race.”

McCreadie, 37, was the most notable hard charger for the third consecutive WoO LMS A-Main, but that fact had him a bit perturbed following the race.

“I just don’t qualify or heat race good,” said McCreadie, who briefly took third from Clanton lap 47 before ceding the spot back the following circuit. “We had a really good car for the feature – again – but the problem is, when you start so far back and have to pass all them guys, you just use a lot of your stuff up. Once you get there in contention like we did tonight, there just isn’t enough left.”

Coffey, who turned 40 on July 25, cracked the top five for the second consecutive race. He also threatened to take third from Clanton midway through the A-Main before he fell back to fifth place.

“I was probably a little bit too tight right in the center to run the bottom,” said Coffey, who is still searching for his first career WoO LMS victory in 101 A-Mains starts. “I finally moved up to the middle in (turns) three and four about halfway through the race and actually drove right to Clanton and got beside him a couple times, but then he kind of adjusted his line a little bit and I went down there and missed once and slid and Timmy went driving on by (for fourth on a lap-37 restart).”

WoO LMS points leader Rick Eckert of York, Pa., finished sixth after nearly slipping out of the top 10 following a lap-23 restart. He left Eriez with a 42-point advantage over Richards.

“I tightened my car up too much,” said Eckert. “I was too tight to roll through the center, and on the one restart I pushed off the corner and whoa…I was in trouble. They were steady driving by me.

“That last restart I got something back. We salvaged a decent finish out of it, so we’ll keep after ’em as hard as we can and hopefully we’ll be there at the end (in the championship battle).”

Finishing in positions 7-10 was third-starter Mike Knight of Ripley, N.Y., who earned the $500 ‘Bonus Buck’ cash for being the highest-finishing driver who hasn’t won a WoO LMS A-Main and isn’t ranked among the top 12 in the points standings; Robbie Blair of Titusville, Pa.; Dan Stone of Thompson, Pa., who ran as high as sixth; and Chub Frank of Bear Lake, Pa., who started 22nd after earning the final transfer spot in the second B-Main with a last-corner pass of Corry, Pa.’s Chris Hackett.

Bump Hedman of Sugar Grove, Pa., topped the 36-car field in Ohlins Shocks Time Trials, turning a lap 16.051 seconds to earn his first-ever fast-time honor in WoO LMS competition. He was an early retiree from the A-Main, however, finishing 23rd after stopping on the track to bring out a caution flag on lap 37.