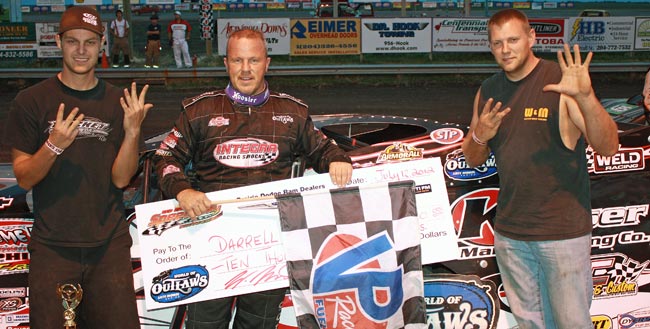 Roaring back from his first DNF of 2012 two nights earlier, the 42-year-old star from Union, Ky., took advantage of an outside pole starting spot to lead the entire distance. His triumph in the tour’s first-ever visit to the Canadian province of Manitoba was his eighth of the season and moved him within one checkered flag of tying the circuit’s modern-era (2004-present) single-season win record held by Scott Bloomquist and Josh Richards.

“We had a good car (on Tuesday night at Black Hills Speedway in Rapid City, S.D.), but we just had some problems and got a DNF,” said Lanigan, whose 18th-place run at the half-mile oval marked just his third finish outside the top 10 in 24 events. “We knocked a hole in the radiator and had to pull out, but we came back strong tonight. We had a brand-new (Cornett) motor – that thing was awesome.”

Lanigan was briefly challenged early in the distance by polesitter Shane Clanton of Fayetteville, Ga., but the tour’s current points leader steered his Rocket machine away from the pack with ease after the race’s lone caution flag flew on lap 13 for the stopped car driven by track regular Mike Balcaen of Winnipeg, Manitoba. He beat Clanton’s Kennedy Motorsports Capital Race Car to the finish line by 2.479 seconds.

Brady Smith of Solon Springs, Wis., was on the move late but settled for a third-place finish in his Team Zero by Bloomquist car, less than a half-second behind Clanton at the checkered flag. WoO LMS Rookie of the Year leader Bub McCool of Vicksburg, Miss., placed fourth in his Victory Circle mount and Pat Doar of New Richmond, Wis., registered a season-best finish of fifth in his Mars car.

Lanigan’s key moment at the four-tenths-mile Red River oval came at the initial green flag. He outgunned Clanton, who won the ‘Wild West Tour’ opener on July 7 at Deer Creek Speedway in Spring Valley, Minn., with a sweeping outside charge through turns one and two and never looked back.

“I knew that was gonna be the pass for the win there,” said Lanigan, whose $10,650 victory snapped his modest five-race winless stretch and pushed his already commanding points lead to 138 points over ninth-place finisher Rick Eckert of York, Pa. “The bottom was definitely the preferred groove, but I just got in on the top and got around him on the first lap.”
{vimeo}45688425{/vimeo}
Clanton, 36, didn’t have quite enough staying power to prevent Lanigan from recording the 34th WoO LMS triumph of his career.

“We still gotta pick it up a little bit to keep pace with Darrell,” said Clanton, who earned his first runner-up finish on the 2012 WoO LMS. “At least we can run with him. I almost had him there for a little bit, but then we got in lapped traffic and he could (the slower cars) a little bit better than I could on the top of one and two.”

Smith, 35, might have been the only driver with a chance to threaten Lanigan had a caution flag been needed late in the distance. He overtook Doar for third on lap 36 and drew close to Clanton without losing any ground to Lanigan.

“I don’t know if we had anything for Darrell, but we did run down Clanton once we finally got to third and I could see Darrell up there ahead of me too,” said Smith. “We were good here all night. Unfortunately, we drew the eight (starting spot) in the redraw. It’s kind of tough to come from back there against these guys.”

Clint Smith of Senoia, Ga., started and finished sixth, but he slipped back to seventh at the start and didn’t regain the sixth spot until passing Chub Frank of Bear Lake, Pa., on lap 34. Frank faded to a seventh-place finish after starting third, while Tim McCreadie of Watertown, N.Y., fell from the fifth starting spot to an eighth-place finish – just his third placing outside the top five in the last 16 WoO LMS A-Mains. Eckert was a quiet ninth and rookie contender Kent Robinson of Bloomington, Ind., was 10th for his second straight top-10 finish.

Thirty-three cars entered the event, which was spun off in rapid-fire fashion by WoO LMS officials because dark clouds surrounding the track signaled the threat of rain.

Terry Casey of New London, Wis., was quickest in Ohlins Shocks Time Trials with a lap of 16.218 seconds. It was his first career WoO LMS fast-time honor.

10:15 p.m. CT – Several WoO LMS teams are already packed up and headed out the gates of Red River Co-op Speedway following the completion of the 50-lap A-Main, which saw Darrell Lanigan return to his winning ways with a dominant performance. The current points leader led every lap of the event en route to his eighth victory of 2012, leaving him just one checkered flag away from tying the tour’s modern-era (2004-present) single-season win record of nine held by Scott Bloomquist and Josh Richards.

Lanigan wasn’t challenged after the race’s lone caution flag flew on lap 13. He beat Shane Clanton to the finish line by 2.479 seconds.

9:25 p.m. CT – The A-Main’s first caution flag flew on lap 16 for Mike Balcaen’s stopped car. Darrell Lanigan has led from the start of the race, but Shane Clanton has ducked underneath the pacesetter several times — and just before the caution, Pat Doar made a power move on the outside off turn two to briefly grab second.

9:10 p.m. CT – The program is racing along with those menacing black clouds still looming beyond the cornfields behind the speedway. Shane Clanton, Darrell Lanigan, Brady Smith and Tim Fuller captured the heats, and Jack Sullivan and Scott Greer won the 10-lap B-Mains.

The field for the 50-lap A-Main is now rolling onto the track.

The first of four heats is already on the racetrack. With dark clouds closing in on the speedway, officials are pushing the show along in hopes of beating Mother Nature. In that vein, heat races have been shortened to eight laps.

7:15 p.m. CT – Tim Fuller was officially announced today as the newest member of the Kennedy Motorsports team, replacing John Lobb as Shane Clanton’s teammate (see story on front page of website). But his first WoO LMS start in a Kennedy Motorsports mount isn’t scheduled until Aug. 1 at Shawano (Wis.) Speedway, so he’s still in his own equipment for the ‘Wild West Tour’ — and after hurting his only engine during Tuesday night’s A-Maina at Black Hills Speedway, he’s out of stock in the powerplant department.

Clanton doesn’t have an extra engine along to lone Fuller, but the New Yorker is racing tonight thanks to some help from Sweeteners Plus driver Vic Coffey. Coffey told Fuller that he had a recently-refreshed ProPower engine that Fuller could borrow for the final three events of the ‘Wild West Tour,’ so Fuller and Coffey met up on Wednesday night at the Grand Forks, N.D., shop of dirt Late Model veteran Brad Seng and installed the engine in Fuller’s car.

Unfortunately, Coffey is not in the pit area for tonight’s action. Issues at the border have prevented him from entering Canada and it’s uncertain if he will be able to make it to Red River Co-op Speedway tonight.

6:15 p.m. CT – Just one WoO LMS regular has previously raced at Red River Co-op Speedway: Pat Doar. The 2011 WoO LMS Rookie of the Year at the ripe age of 47, Doar was victorious in his last appearance at the track, winning the 2010 Gerald Balcaen Memorial event for WISSOTA Late Models.

Hot off a sixth-place finish on Tuesday night at South Dakota’s Black Hills Speedway that was his strongest outing on the tour since February, Doar is hoping to continue the momentum tonight. Perhaps he’ll get some help from his wife Nancy, who reported that she was Pat’s lone crewman when Doar won at Red River two years ago.

6:05 p.m. CT – More than two-dozen cars are unloaded in the Red River Co-op pit area so far, including veteran dirt Late Model driver Mike Balcaen (below), who is all smiles to see the WoO LMS finally visit his hometown track.

“We’re really glad everybody with the Outlaws has made the effort to come up here,” said Balcaen, a 47-year-old who lives in Winnipeg just minutes from the track. “It’s nice to have a chance to run an Outlaw show close to home like this.”

Balcaen has been racing on a track that sits on the site of the current Red River Co-op Speedway since 1984. He’s won 11 Late Model championships here, including titles on the old half-mile layout (when it was called Winnipeg Speedway and Victory Lane Speedway) and the current smaller oval that swung into action during the late ’90s. He’s also captured two of the four WISSOTA Late Model features run this season at Red River, including a sweep of the June 21 double-feature program that gave him the 200th and 201st main-even wins of his career.

Balcaen said there’s a big buzz about tonight’s program in the local racing community and is hopeful that entertaining competition will break out on the bullring, which sports an interesting shape.

“The turns are a little different at both ends,” Balcaen said of Red River Co-op’s shape. “Most of your passing tends to happen down in three and four.”

Balcaen will enter two Late Models in tonight’s program. Winnipeg’s Ward Imrey, customer of Balcaen’s from the open-wheel Modified division, will be behind the wheel of Balcaen’s WISSOTA Late Model.