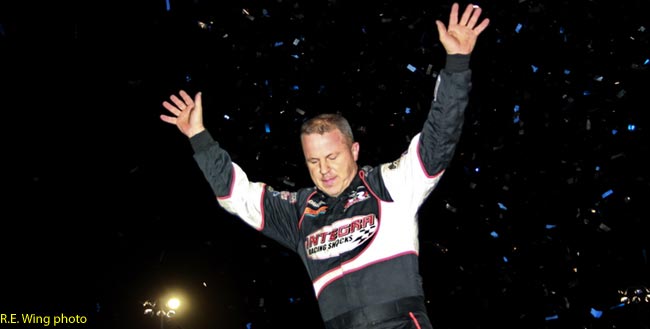 The 40-year-old star from Union, Ky., emerged victorious for the second time in as many career starts at the egg-shaped track, capturing Friday night’s World of Outlaws Late Model Series ‘Sunshine 50.’

“Our car runs pretty good here,” said the modest Lanigan, who won the national tour’s inaugural event at Ocala almost exactly one year ago. “We definitely like coming to this place.”

Continuing his torrid comeback in the wake of missing last month’s WoO LMS season opener at Volusia Speedway Park due to a medical issue, Lanigan scored his second A-Main triumph in a row to join Scott Bloomquist of Mooresburg, Tenn., as the tour’s only victors in four 2011 events. He pocketed $10,675 just six days after earning over $20,000 for winning the ‘Cash Cow 100’ at Columbus (Miss.) Speedway.

Lanigan, who started fifth, steered his self-owned Rocket car into third place by the second lap. The 2008 WoO LMS champion drove underneath Josh Richards of Shinnston, W.Va., for second on lap 13 and made the same move to overtake race-long pacesetter Jonathan Davenport of Blairsville, Ga., for the lead on lap 18.

The remainder of the distance belonged to Lanigan, who kept Richards at arm’s length and survived a lap-49 caution flag that necessitated a green-white-checkered conclusion.

Richards, who started third, settled for a season-best finish of second in his Rocket mount. He nearly passed Davenport for the lead on lap 12 but skirted high in turns one and two the following circuit, losing the runner-up spot to Lanigan.

Davenport, who started from the pole position, relinquished second to Richards on a lap-18 restart but held on to place third in the Barry Wright house car. Reigning DIRTcar Summer Nationals champion Jason Feger of Bloomington, Ill., ran among the top five for the entire distance and finished fourth in his Bob Pierce-built machine, and WoO LMS veteran Chub Frank of Bear Lake, Pa., was fifth for his first top-five run of 2011 in his Rocket car.
{vimeo}21515525{/vimeo}
“The track was a little one-lane tonight, but it was still racy at the beginning and you had to get there (to the front) – and we had the best car to get there,” said Lanigan, who recorded his 21st career win on the WoO LMS since 2004. “I knew I didn’t have too long to get to the front. We got to third quick, and then those two guys (Richards and Lanigan) slipped up a little and we were able to get by ’em.”

Lanigan maintained a half- to full-second edge over Richards throughout the green-flag run stretching from lap 18 to 49. He had just taken the white flag when the race’s third and final caution flag flew after Billy Moyer of Batesville, Ark., spun out of eighth place in a chain-reaction scramble caused by the slowing car of Seaford, Del.’s Austin Hubbard, who was struck by a flat right-rear tire while holding fifth place.

Richards, 23, was unable to offer a challenge on the ensuing two-lap sprint to the finish. He acknowledged that he had effectively allowed his opportunity to reach Victory Lane for the first time in 2011 slip through his fingers when his bid to unseat Davenport fell short early in the distance.

“When I was up beside of Davenport (on lap 12) he did what he had to do – he got wide and tried to run me out a little,” said Richards, who has won the last two WoO LMS championships. “When we slipped up (in turns one and two), Darrell got by. That was our shot right there. I knew from then on that there wouldn’t be much passing and Darrell was good, so it would be tough to get back by him.

“I took a chance. I probably should’ve waited because Davenport was softer on tires, but you never know. I knew the bottom was getting rubbered up and I knew we had tire at the beginning, so I figured if we were gonna make a move I probably should try it. It didn’t work out this time, but we still had a good car and it was a good night for us.”

Richards vaulted from fifth to second in the WoO LMS points standings with his performance, closing within two points of Moyer, who remained the leader despite tumbling to 20th in the finish. Lanigan, meanwhile, cracked the top 10 for the first time this season, reaching ninth place, 56 points in arrears of Moyer.

Both of the A-Main’s early cautions involved Chip Brindle of Chatsworth, Ga., a crate Late Model standout making his first-ever WoO LMS start. He spun in turn four on lap five as part of a tangle that included Jill George of Cedar Falls, Iowa, who ran a backup car after a B-Main accident forced her to use a provisional to start the headliner, and 2011 Rookie of the Year contender Brian Reese of Sharpsburg, Ga., and the upstart spun again on the backstretch on lap 18.

Rick Eckert of York, Pa., finished sixth and Shane Clanton of Fayetteville, Ga., placed seventh despite racing the final two laps with a virtually flat right-rear tire. Ivedent Lloyd Jr. of Ocala, Fla., made his home track fans proud by advancing from the 17th starting spot to finish eighth – and earn the $500 ‘Bonus Bucks’ cash for being the highest-placing driver who hasn’t won a WoO LMS A-Main and isn’t ranked among the top 12 in the points standings – while Steve Francis of Ashland, Ky., and Tim McCreadie, whose night went downhill after he fell from second to fifth with two laps remaining in his heat race because he clipped the inside tractor tire in turn two, rounded out the top 10.

Hubbard established a new track record in Ohlins Shocks Time Trials, blazing around the track in 14.873 seconds for his first quick-time honor of 2011. He was one of six drivers in the 28-car field to surpass the former one-lap standard of 15.041 seconds set by Richards on Feb. 13, 2011.

Heat winners were Hubbard, Lanigan and Davenport, and Brent Robinson of Smithfield, Va., topped the B-Main.

NOTE: Race distance went to 51 laps due to green-white-checkered finish

FOLLOW THE ACTION ON TWITTER: Fans can keep up-to-date with the World of Outlaws Late Model Series online and through text messages on cell phones via Twitter, the internet’s fast-growing social-networking and micro-blogging website. Updates are provided to Twitter ‘followers’ of the WoO LMS throughout each race night, and fans also receive breaking news and interesting notes from the tour.

More than 3,300 fans are now WoO LMS ‘followers’ on Twitter. To sign-up and receive updates anywhere at anytime, visit http://twitter.com/WoOLateModels.