• Lanigan Back On Top At Little Valley Speedway 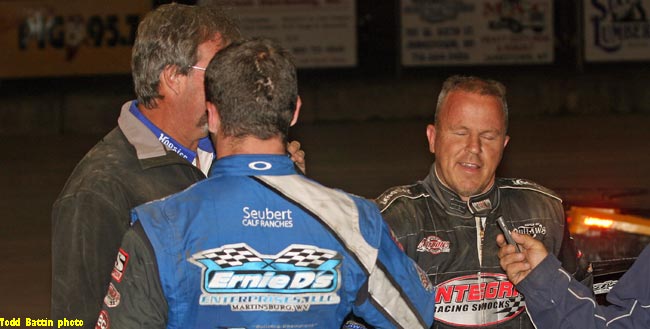 Record 14th Victory Of 2012, 40th Of Career Moves Lanigan Back Ahead Of Richards On Tour’s Alltime Win List

The 42-year-old star raced off the outside pole starting spot to lead the entire distance. He turned back a brief mid-race threat from Josh Richards of Shinnston, W.Va., and then pulled away following a lap-32 restart to defeat the returning two-time WoO LMS champion by a commanding 2.231 seconds.

Lanigan’s triumph was his record 14th of the 2012 season and the 40th of his career in World of Outlaws competition, moving him out of a tie with Richards for the top spot on the circuit’s alltime win list.

“I think we’re bouncing that most wins (record) back and forth,” said Lanigan, who watched Richards tie him for career top-winner status with a victory on Aug. 18 at Merritt Raceway in Lake City, Mich. “We’ll see who comes up with it.”

Clint Smith of Senoia, Ga., finished a distant third, nearly a half-lap behind Lanigan on the sprawling half-mile fairgrounds oval. Smith started from the pole position but was outgunned by Lanigan at the initial green flag and lost second to Richards on lap nine.

Ron Davies of Warren, Pa., a 54-year-old veteran who won the most recent dirt Late Model feature run at Little Valley, settled for a fourth-place finish after starting third. Sixth-starter Vic Coffey of Caledonia, N.Y., who won the only dirt Late Model feature of his career in 2007 at Little Valley, briefly grabbed fourth from Davies on a lap-16 restart but ceded the spot back two circuits later and went on to place fifth.

Of the top five finishers, only Davies did not drive a Rocket Chassis machine. He was behind the wheel of an MB Customs mount.

Lanigan, of course, raved about the performance of his Cornett-powered Rocket car after scoring a $10,650 checkered flag that pushed his 2012 WoO LMS earnings to an astounding $284,650.

“The car was just awesome,” said Lanigan, who extended his points lead to 172 over ninth-place finisher Rick Eckert of York, Pa., with just eight events remaining on the 2012 schedule. “The carburetor stumbled a little bit in the corners and kind of screwed me up, but man, that thing would run down the straightaways. It’s just an unbelievable motor.”

Lanigan, whose record streak of six consecutive wins ended with quiet finishes of fifth and eight during the tour’s Michigan doubleheader on Aug. 17-18, kept Richards from scoring a second straight victory. Richards, 24, took advantage of an open spot on his NASCAR Nationwide Series schedule to enter his third WoO LMS event in a row.

“We were softer (compound) with the left-rear and right-front tire than Darrell and I thought we had something on him,” said Richards, who started fourth. “They said we were a half-second faster (than Lanigan) when I got to second and he got hung up in some traffic during the first green flag run. We caught him and I felt like if we could’ve got by him we could’ve held him off even though he was better at the end, but we couldn’t get by him and then our tires started giving out.

“We were trying hard. It definitely wasn’t from lack of effort. But Darrell and his guys were really good tonight and we just gambled on tires and it didn’t work out. It was still good enough to run second, so we’re happy.”

Smith, 47, registered his third-place finish with a Rocket car making its debut run.

“We just had some brand-new car blues,” said Smith. “We built this car after Michigan, and if we would’ve got a shakedown night at Winchester or Selinsgrove (the Virginia and Pennsylvania tracks that had WoO LMS events rained out last weekend) we would’ve been more prepared here.

“We had some header problems that weren’t sealed for hot laps and qualifying, so we had to get all that fixed. We had a fifth-coil come loose in qualifying. Everything was good in the heat race, but we had an oil line come loose about lap 30 in the feature so I was dropping oil pressure and I had to just hold my spot and settle for third.

“But I feel good to be traveling with these three (Lanigan and Richards) right now,” he added. “It’s good to be in company with them and get on the podium with ’em. Hopefully we’ll get our night. Josh ain’t here to stay, so maybe it can be between me and Darrell at a race coming up.”

Shane Clanton of Fayetteville, Ga., made a late-race charge to finish sixth, advancing five positions in nine laps after the race’s third and final caution flag flew on lap 32 for a turn-one tangle involving Dan Stone of Thompson, Pa., and Bump Hedman of Sugar Grove, Pa. Bub McCool of Vicksburg, Miss., was the last driver to fall to Clanton and finished seventh. Jimmy Mars of Menomonie, Wis., finished eighth after taking the final restart in sixth place; Rick Eckert of York, Pa., cracked the top 10 late to finish ninth; and Mike Knight of Ripley, N.Y., was 10th.

Twenty-nine cars entered the event, which was run on a cool summer evening.

Richards was fastest in Ohlins Shocks Time Trials with a lap of 21.726 seconds. It was his second fast-time honor of 2012.

Heat winners were Richards, Coffey and Davies, and John Lobb of Frewsburg, N.Y., won the B-Main.

The next action for the WoO LMS comes on Saturday night (Sept. 1) with the running of the ‘Black Diamond 125’ at Tyler County Speedway in Middlebourne, W.Va., The unique $150,000-plus event includes a pair of 40-lap preliminary features paying $10,000 to win each and the 45-lap ‘Sweet Sixteen’ finale – for the top eight finishers in each prelim – that offers a $20,000 top prize.

A sprawling half-mile fairgrounds oval about 80 miles southeast of Buffalo, Little Valley is hosting the national tour for the first time in its history. A 50-lap A-Main paying $10,000 to win will top the evening’s agenda.

10:45 p.m. – Darrell Lanigan ended an, ahem, two-race winless streak, cruising to a flag-to-flag victory in the 50-lap A-Main. He pulled away from Josh Richards after a lap-32 caution flag to beat the returning two-time series champion by a full straightaway, with third-place Clint Smith nearly a half-lap behind Lanigan at the finish.

The open-wheel Modified feature, which includes a double-duty-pulling Ron Davies and his son Dan, is now on the racetrack. The race will go 20 laps or 15 minutes, and then the WoO LMS headliner will hit the speedway.

Can Cat Daddy do it?

9:05 p.m. – Clint Smith has fallen short of defeating Darrell Lanigan twice this summer — he lost on the last lap to the WoO LMS points in July at River Cities Speedway in Grand Forks, N.D., and finished second to Lanigan in a body-rubbing duel on Aug. 6 at Iowa’s Independence Motor Speedway — so he’s anxious to have another shot tonight. Smith drew the pole position for the 50-lap A-Main and Lanigan will start alongside in the second spot.

Ron Davies, who drew the loudest cheer during the A-Main draw for position, will start third, followed by Josh Richards, Bub McCool and Vic Coffey.

8 p.m. – The three 10-lap heat races were dominated by the polesitters — Josh Richards, Vic Coffey and Ron Davies were victorious — but some post-race activity following the second preliminary drew a rise from the SRO crowd.

Moments after the second heat was checkered, fifth-place finisher Dick Barton ended up sitting sideways on the inside berm in turn two from what looked like a bump from Rick ‘Boom’ Briggs, whom Barton overtook for fifth on the final lap. The fans reacted with a loud roar, and WoO LMS race director Bret Emrick initially ruled that Briggs would be disqualified from his sixth-place finish and set down for the remainder of the night for running into Barton.

However, after WoO LMS officials heard from both Barton and Briggs, it was determined that Briggs did not hit Barton on purpose and would thus be reinstated to his sixth-place position and move on to the A-Main. As Briggs noted, after he crossed the finish line side-by-side with Barton, he slid high into the dust in turn one. Briggs then had to “gas it up” to avoid sliding into the outside wall — but with Barton still door-to-door with him as they slowed, they rubbed together and Barton was sent into the berm.

7:25 p.m. – With an absolutely packed house of fans looking on (see new picture above), Josh Richards made his presence known on the WoO LMS again, ripping off the fastest lap in Ohlins Shocks Time Trials. He registered his second fast-time honor of the 2012 season with a circuit of 21.726 seconds.

Vic Coffey, whose lone career win in a dirt Late Model came at Little Valley in an unsanctioned event in 2007, was second-fastest at 21.740 seconds. The quick clocking got Coffey off to a great start as he bids for his first-ever WoO LMS victory at a track less than two hours from him home in Caledonia, N.Y.

6:35 p.m. – Hot laps are now underway for the 29 cars signed in to compete tonight. Ohlins Shocks Time Trials will immediately follow the completion of the practice sessions.

5:30 p.m. – Vic Coffey thought his Sweeteners Plus racing hauler would need a new engine after its turbo blew on Interstate 81 near Winchester, Va., last Saturday, creating a situation in which the truck’s powerplant would not turn off until it ran out of oil. Considering the heavy smoke that poured from the truck as it sat on the highway’s shoulder, it appeared major damage was done.

But Coffey’s cars were towed to the track today with the same truck. Surprisingly, after a new turbo was put on the engine, it fired up and seems to be running without a problem.

5:10 p.m. – John Lobb, who followed the WoO LMS fulltime in 2011 and during the first half of the 2012 season, will make his first start on the tour since Kennedy Motorsports owner John Kennedy took him off the circuit before July’s Wild West Tour.

A resident of nearby Frewsburg, N.Y., Lobb has been devoting much of his time for the past month to helping his son’s go-kart effort. He will drive his brother Randy’s No. 28 tonight.

4:05 p.m. – The WoO LMS travelers — the top 11 drivers in the points standings are already on hand — will face some formidable competition tonight. Entrants ready to challenge the regulars include two-time WoO LMS champion Josh Richards, who is back in his father Mark’s Rocket No. 1 with a break in his NASCAR Nationwide Series schedule; Wisconsin superstar Jimmy Mars; Georgia’s Brian Reese, who made the trip north this week with Clint Smith; 2011 WoO LMS regular Ron Davies, who has enjoyed plenty of success at Little Valley in recent years (he won the last dirt Late Model show run here this season); David Scott; Jason Dupont; Brent Rhebergen; Scott Gurdak; Dick Barton; and Rick ‘Boom’ Briggs.

3:45 p.m. – The WoO LMS doesn’t visit any other track quite like Little Valley Speedway.

For starters, the track boasts monster-length straightaways. It also has an impressive covered grandstand. But perhaps the most notable aspect of the facility is the pit area parking situation — haulers are basically scattered all over the place outside the speedway’s backstretch. A majority of the dirt Late Model entrants are parked in a row off turn two, but other entrants, as well as support-division competitors, are parked between, and in some cases inside, the barns that are used for the annual fair held on the property.