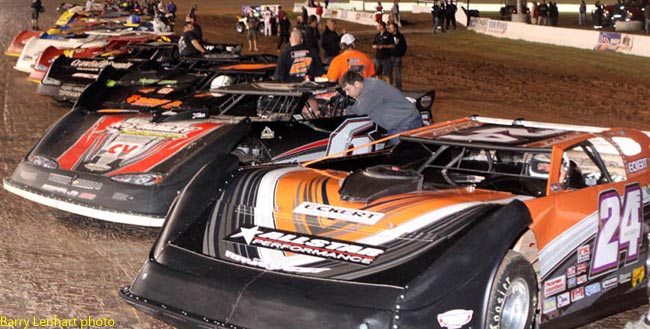 EAST SMETHPORT, PA – July 7, 2011 – A visit to McKean County Raceway on Wed., July 27, has been added to the 2011 World of Outlaws Late Model Series schedule, tour officials announced on Thursday.

The inaugural ‘Penn Gold 40’ at the three-eighths-mile oval will offer an $8,000 top prize and serve as the back end of an attractive mid-week doubleheader in western Pennsylvania for the WoO LMS, which will compete on July 26 at Dog Hollow Speedway in Strongstown, Pa.

A fairgrounds track that operates on a specials-only schedule, McKean County joins the WoO LMS as a replacement for an event that had been scheduled on July 27 at Beckley (W.Va.) Motor Speedway. The Beckley facility was recently closed by its promoter for the remainder of the season.

“We’re very happy to fit the first-ever World of Outlaws Late Model Series event at McKean County Raceway into a date that opened up on our schedule,” said tour director Tim Christman. “McKean County is known to have a very strong fanbase and we’re excited to bring them the exciting brand of racing that is the staple of the World of Outlaws.”

The blockbuster WoO LMS event carries title backing from Penn Gold, a Bradford, Pa.-based well services company that sponsors tour Rookie of the Year contender Ron Davies of Warren, Pa. Racing at McKean County will serve as a homecoming for Davies, who lives less than an hour’s drive from the track.

The July 27 show will include time trials, heat races, B-Mains and a 40-lap A-Main for the WoO LMS as well as a full program for the ULMS E-Mod Series.

McKean County Raceway is located on the McKean County Fairgrounds at the intersection of Routes 6 and 46 in East Smethport, Pa.

For more information on the WoO LMS and McKean County Raceway, visit www.worldofoutlaws.com and www.mckeancountyraceway.com.