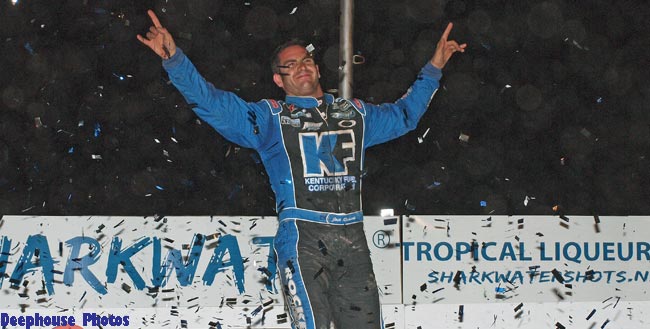 The two-time defending series champion made short work of the field, vaulting forward from the fifth starting spot to grab the lead from Darrell Lanigan of Union, Ky., on lap 14. He wasn’t challenged the remainder of the distance en route to a triumph worth $10,875.

Richards, 23, beat Brian Birkhofer of Muscatine, Iowa, to the finish line by a commanding 4.213-second margin for his seventh win of the 2011 WoO LMS season. The checkered flag tied him with Lanigan for top-winner status through 25 events and put him within reach of two series records: most consecutive wins (four) and most wins in a single season (nine).

Points leader Rick Eckert of York, Pa., finished third, maintaining a 50-point edge over Richards with his third top-three finish in his last four starts. Lanigan settled for a fourth-place finish after starting from the outside pole and leading laps 1-13, and 13th-starter Shane Clanton of Fayetteville, Ga., placed fifth thanks to a last-lap pass of Bear Lake, Pa.’s Chub Frank.

Richards’s 35th career win on the WoO LMS – more than any driver since 2004 – came in his first-ever visit to Tom Sprague Sr.’s one-third-mile oval in western Michigan. The track’s fast, moist condition surprised his father Mark’s Rocket Chassis team, but he handled the physical racing with aplomb.

“They kept talking about how slippery it is and how slow it is,” Richards said of the scouting report he heard on Winston Speedway. “(Then) you come here and it’s wet and wide open and you can race all over it. It was a fun race.”
{vimeo}27936145{/vimeo}
Richards was on the charge as soon as the race was green-flagged, hustling his No. 1 to the front. He reached second with a lap-eight pass of Eckert and shortly thereafter drove around the outside of Lanigan to assume command for good.

“On a track like that where there’s traction, you just try to use it to your advantage,” said Richards, who built leads of as much as a straightaway once he took the point. “You just try to keep your momentum up and get your car pointed to where if someone slips up, you can go.

“Luckily enough we had the right tire combination and had the car right to where I was able to do that.”

Birkhofer, 39, was certainly no match for Richards. He came on strong during the race’s second half to secure second from Jimmy Mars of Menomonie, Wis., on lap 40, but he never drew close to Richards.

“Josh was obviously the best car,” said Birkhofer, who started seventh in his MB Customs machine. “He got out there and took off. We just were consistent.”

Eckert, who started third but fell back as far as fifth, rallied in the final circuits to grab the show finishing position. His Team Zero by Bloomquist remained just a bit off Richards’s torrid pace.

“If Josh keeps winning races like this he’s gonna get us (in the points) so we’re gonna have to pick our pace up,” said Eckert, whose two wins this season came in May. “We’re running well but just not as good as Josh right now.”

Richards will go for a record-tying fourth consecutive WoO LMS victory on Saturday night (Aug. 20) at Merritt Raceway in Lake City, Mich. Only Eckert (2006) and Tim Fuller of Watertown, N.Y. (2009) have won four A-Mains in a row on the tour.

“I don’t want to think about that,” said Richards, who had never won three straight WoO LMS events until Friday night. “We just go in each night and try to race hard. You try to win the race everywhere you go. You try not to put any extra pressure on yourself.”

Fuller finished sixth in Friday’s A-Main, rallying after he brought out the first caution flag of the race on lap three when he bounced in the air and slid to a stop in turn four. The event’s fourth starter had to restart from the rear of the field.

Frank placed seventh after losing two spots on the final lap. Ron Davies of Warren, Pa., was eighth and earned the $250 bonus as the highest-finishing WoO LMS Rookie of the Year contender; Vic Coffey of Caledonia, N.Y., finished ninth after starting from the pole position; and Tim McCreadie of Watertown, N.Y., completed the top 10 after using a provisional to start 23rd.

Four caution flags slowed the race – all for drivers who have followed the WoO LMS this season. Following Fuller’s early misfortune, rookie Pat Doar of New Richmond, Wis., stopped between turns one and two on lap 24; Clint Smith of Senoia, Ga., stopped in turn three on lap 31; and Jill George of Cedar Falls, Iowa, spun in turn two on lap 33.

Mars, who climbed as high as second from the eighth starting spot, was running fifth when he pulled off the track on lap 46. His car’s right-front lower control arm broke because he slapped the turn-four wall.

Heat winners were Lanigan, Fuller, Coffey and Doar. The B-Mains were captured by Dennis Erb Jr. of Carpentersville, Ill., and Austin Hubbard of Seaford, Del.

The WoO LMS’s doubleheader in Michigan ends on Saturday night (Aug. 20) at Merritt Raceway in Lake City with a 50-lap event paying $10,000 to win.