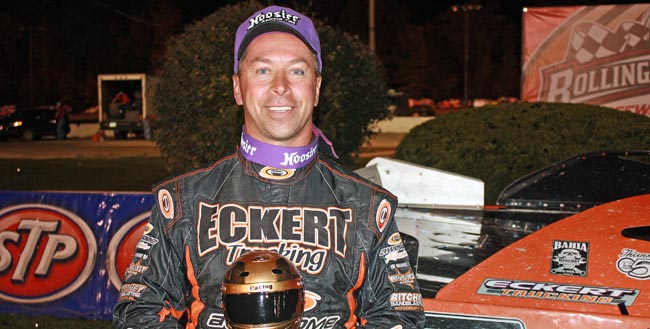 Eckert steered his Team Zero by Bloomquist car past Bub McCool of Vicksburg, Miss., for the lead on lap 11 and never looked back. He had a straightaway-plus advantage wiped out by a lap-35 caution flag but still triumphed by a commanding margin, pulling away over the final circuits to defeat a late-charging Shane Clanton of Fayetteville, Ga., by 5.529 seconds.

“I just love this place,” said Eckert, whose four career WoO LMS starts at Rolling Wheels include two wins (2011 and ’12) and two runner-up finishes (’05 and ’10). “It’s turned into my favorite racetrack in the country.”

Runaway WoO LMS points leader Darrell Lanigan of Union, Ky., had an relative off night, finishing third despite starting from the pole position. He was outgunned for the lead at the initial green flag by McCool and fell back as far as fourth before passing McCool for third on lap 40.

Vic Coffey of Caledonia, N.Y., who has frequented Rolling Wheels throughout his career to compete in DIRTcar Northeast Modified events, battled forward from the sixth starting spot to place fourth. McCool, who led laps 1-10 and ran second until lap 39, settled for a fifth-place finish in a car that sported a fresh Halloween-themed wrap.

Eckert earned $11,150 for his sweep of the night’s program. He set fast time – his fifth of 2012 to tie Lanigan for the top spot in that category – won a heat race and dominated the feature.

The triumph was Eckert’s fourth of 2012 and the 28th of his career on the WoO LMS, pulling him into a tie with Steve Francis of Ashland, Ky., for third on the national tour’s win list since 2004.

Eckert, who started third, was in a league of his own once he overtook McCool for the lead. He passed Lanigan for second on a lap-four restart and spent six circuits measuring McCool before surging by the 2012 WoO LMS Rookie of the Year.

“Me and Bub talked about tires before the race and I told him what I was putting on,” said Eckert. “He went softer – and this place likes one tire, and one tire only, and if you don’t have it on you’re in trouble, so I wasn’t panicking when he was leading (early).

“I finally moved up in (turns) three and four and about run over (McCool) off of four. I was like, ‘The next lap when we get here, it’ll be good.’ Then (the ensuing circuit) I drove around him down there.”

Eckert praised the performance of his Jay Dickens-powered machine.

“My car was maneuverable,” said Eckert. “I could go anywhere I wanted to go. We caught on to something when we got to Berlin, Michigan (on Sept. 21-22), and since then (the setup) lets me drive (the car) just as hard as I can drive it. I had to drive the wheels off it tonight because when you ease up on it, it ain’t very good.

“My guy (crewman Bob Miller) was telling me I had a big lead, but I couldn’t slow up. If I slowed up I got worse, so I just ran as hard as I could.”

That was actually quite simple for Eckert, who feels utterly comfortable circling Rolling Wheels.

“Our car and my driving style sort of fit this place,” said Eckert. “It’s big – and I grew up on big racetracks – and you gotta drive straight. I drive straighter than the average guy – too straight for most places, and it gets me in trouble – but here it makes up for it for sure.”

Clanton, 37, advanced from the seventh starting spot to finish second in the Kennedy Motorsports Capital Race Car, but he never drew close to Eckert. The Peach State racer vaulted from fourth to second shortly after a lap-35 restart – passing both Lanigan and McCool – but couldn’t challenge the eventual winner.

“I don’t think there was any catching him,” Clanton said of Eckert. “His car was a little more balanced than what ours was. We got to second and just maintained, and then we got to lapped traffic and he was just more maneuverable. He could pass cars faster than I could.”

Lanigan, 42, was surprisingly never a threat to push his single-season record win total to 16, but he left Rolling Wheels with a 204-point lead in the WoO LMS standings that puts him on the verge of clinching his second career championship. Eckert still is mathematically alive, but Lanigan can claim the title by merely earning a minimum of 82 points – the amount given to the fifth B-Main non-transfer – in each of the season’s three remaining events.

Three caution flags slowed the event. Alan Fink of Brewerton, N.Y., and Sean Beardsley of Central Square, N.Y., spun between turns one and two on the second lap; Rick ‘Boom’ Briggs of Bear Lake, Pa., was sent twirling between turns three and four on lap four; and Bryan Driver of Pennington, N.J., spun on the homestretch on lap 35.

Twenty-five cars were signed in for the program. The only driver unable to start the A-Main was Ricky Elliott of Seaford, Del., whose machine was sidelined for the night by an apparent burnt piston during hot laps.

Eckert earned fast-time recognition with a lap of 18.632 seconds.

Heat winners were Eckert, Fuller and Lanigan. No B-Main was run.

The WoO LMS will be back in action on Wed., Oct. 10, in the Circle K World of Outlaws Late Model Showdown at The Dirt Track at Charlotte in Concord, N.C.

A five-eighths-mile semi-banked track, Rolling Wheels is hosting the WoO LMS for the fourth time. There have been three different winners in the previous races: Chub Frank in 2005, Darrell Lanigan in 2010 and Rick Eckert in 2011 (the first World of Outlaws show run as part of NAPA Auto Parts Super DIRT Week).

No doubt about it

10:40 p.m. – Rick Eckert is back at his trailer celebrating his fourth WoO LMS victory of 2012 after absoutely destroying the field. He overtook Bub McCool for the lead on lap 11 and cruised to the checkered, beating a late-charging Shane Clanton to the finish line by 5.529 seconds.

Darrell Lanigan started from the pole position but was outgunned for the lead by McCool at the initial green flag. The WoO LMS points leader never found his winning rhythm, settling for a third-place finish.

9:35 p.m. – Darrell Lanigan drew the pole position for the 50-lap A-Main, setting himself up to chase his 16th victory of the season. Bub McCool will start second, followed by Rick Eckert, Clint Smith, Tim Fuller and Vic Coffey, who poor luck in the feature redraw continued.

With 24 cars ready for action in the A-Main (Ricky Elliott scratched for the night after his car was sidelined by an apparent burnt piston in hot laps), no B-Main is needed tonight.

Dan Stone, who finished second in last year’s WoO LMS show here, will start 23rd after his Super Duece machine was struck by engine woes during heat action. He brought his own No. 21d out of his trailer to run in the A-Main.

And to wake you up, here’s a shot of the hood of Bub McCool’s Halloween-themed car, which he debuted tonight. That’s not Bub, by the way….

Eckert ran away with the first prelim, winning by 3.682 seconds over Clint Smith. It was the largest margin of victory in the heats.

Fuller, meanwhile, captured the second heat after making a quick 10-minute transmission change following time trials. He is seeking to end an over two-year winless slump on the WoO LMS at a track where he’s won several DIRTcar Northeast Modified events in the past.

Lanigan slipped from his pole position starting spot to third in the final heat, but that didn’t deter him. He sailed around the outside of Tim McCreadie, and two laps later Bub McCool, to gain control of the event.

8:15 p.m. – Hoping to duplicate his victory in last year’s NAPA Auto Parts Super DIRT Week stop at Rolling Wheels, Rick Eckert started his night off on the right foot by setting fast time with a lap of 18.632 seconds. It was his fifth fast-time honor of 2012, tying him with Darrell Lanigan for the top spot in the that category.

Vic Coffey was second-fastest with a lap of 18.818 seconds, giving him reason to believe that tonight might be the night he finally breaks into Victory Lane on the WoO LMS. Rolling Wheels, of course, is a track he has frequented for special DIRTcar Northeast Modified shows throughout his career.

And now Lanigan is blazing around the ‘Fast Track’ for real — Ohlins Shocks Time Trials have begun.