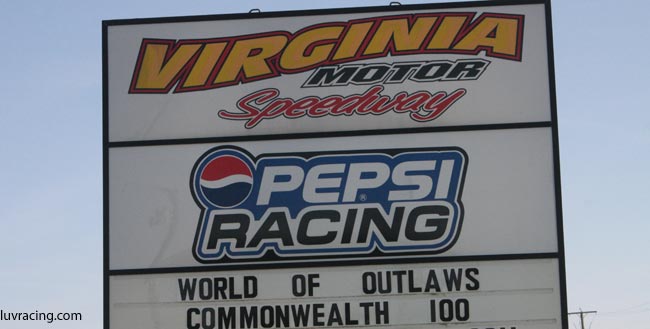 “In the interest of economics and safety for our race fans and competitors, it’s best to just push the race back one day rather than create the unnecessary situation of bringing everyone out to the track to sit through a long day in ugly weather,” said VMS owner Bill Sawyer. “With the conditions that are staring us in the face, both our staff and officials from the World of Outlaws decided the best thing to do was to make the call early and put all our focus on closing out the Commonwealth 100 weekend on Sunday.

“We have a great, sunny forecast for Sunday, so it’s going to be a wonderful day for racing.”

The 26-car starting field for the Commonwealth 100 was set through Friday night’s four 15-lap heat races and two 20-lap B-Mains. Heat winners were Austin Hubbard of Seaford, Del., Darrell Lanigan of Union, Ky., Scott Bloomquist of Mooresburg, Tenn., and Steve Shaver of Vienna, W.Va., and the B-Mains were captured by Jeremy Miller of Gettysburg, Pa., and Josh Richards of Shinnston, W.Va.

Chris Madden of Gray Court, S.C., who won last year’s inaugural Commonwealth 100, will start from the pole position in his quest for back-to-back triumphs. Steve Francis of Ashland, Ky., will take the green flag from the outside of the front row.