• Clanton Gets On The Board With ‘Cowboy 50’ Triumph 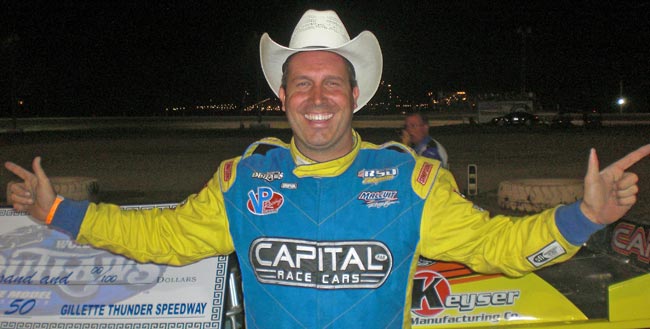 Refusing to concede defeat after being overtaken for the lead midway through the World of Outlaws Late Model Series ‘Wild West Tour’ finale, Clanton mounted a stirring rally to outduel Darrell Lanigan and snap a 37-race winless streak on the national tour.

The $10,775 triumph was a season-turner for Clanton, a 35-year-old standout from Fayetteville, Ga., who has struggled to get his new Capital Race Cars machine running up to his exacting standards. He had not registered a single top-five finish in a WoO LMS A-Main until breaking through on Tuesday at the one-third-mile oval in eastern Wyoming.

“I feel ecstatic,” said Clanton, whose last WoO LMS win came on July 3, 2010, at Tazewell (Tenn.) Speedway. “Me and (former racer) Marshall Green have worked our butts off to try to develop a race car and it’s took this long to get where we can race with these guys on a week-in, week-out basis. It feels good to win a World of Outlaws race with it.”

Clanton, who started from the pole position, found an extra gear in his Ronnie Dobbins-owned car after his race-long stint at the head of the pack ended when Union, Ky.’s Lanigan passed him on lap 27. Clanton went to the outside line, pinned Lanigan behind the lapped car driven by John Lobb of Frewsburg, N.Y., and surged into the lead for good on lap 35.

Lanigan, 41, could only watch from afar as Clanton sailed to the checkered flag. The 2009 WoO LMS victor at Gillette settled for runner-up money in his Rocket mount, crossing the finish line 1.121 seconds behind Clanton.

Tim McCreadie of Watertown, N.Y., finished a distant third in the Sweeteners Plus Victory Circle chassis, roughly a half-lap behind Clanton. He spent most of the distance running just in front of two-time defending WoO LMS champion Josh Richards of Shinnston, W.Va., who settled his father Mark’s Rocket house car into fourth on a lap-12 restart and stayed there to the finish.

Chub Frank of Bear Lake, Pa., completed the top five in his Rocket. He overtook 2011 WoO LMS Rookie of the Year points leader Pat Doar of New Richmond, Wis., for fifth on lap 37 and ran alone in the position for the remainder of the race.
{vimeo}26663741{/vimeo}
Clanton became the 10th different winner in 18 WoO LMS A-Mains this season. He let loose in Victory Lane with one of his customary loud screams of joy and, of course, donned a cowboy hat for Gillette’s traditional post-race photos.

“I was about content just riding second and having a good race (after losing the lead to Lanigan),” said Clanton, who recorded his 15th career win on the WoO LMS. “But then I seen where (Lanigan) just started twitching a little bit just off the corner. He was trying to get lower and lower, and I said, ‘Heck, he’s leaving me the whole outside,’ so I just went out there and it stuck.

“I just made the move, stuck with it and John (Lobb) luckily just turned a little sideways and held Darrell up for a minute so I could drive by him on the outside.”

Lanigan, whose four WoO LMS wins this season leads all drivers, had no answer for Clanton’s late-race speed.

“We got tight as soon as it started to rubber, but Shane had a good car,” said Lanigan, who started fifth. “He could run anywhere on the racetrack, so we wound up second.

“I couldn’t run up there on the top because I just got way too tight, and then those lapped cars held me up on the bottom so he just drove around me.”

“It’s been a real good trip for us,” said McCreadie, who ran his streak of consecutive top-10 finishes to 11. “I wish the first restart (on the opening lap) could’ve went because I don’t think anybody knew there was traction up on the outside there so I might have been able to snooker them, but we’ll take third. Shane – man, he was just good when (the track) really started to latch up.”

Two caution flags slowed the A-Main, including one that aborted the original start and sent 2008 Gillette WoO LMS winner Tim Fuller of Watertown, N.Y., to the rear of the field. Fuller, who started third, appeared primed for his best run of 2011 but had his hopes dashed when a tap to his car’s right-rear corner sent him spinning in turn four.

Fuller initially thought contact from Lanigan had turned him around – he pulled in front of Lanigan’s car during the caution period to express displeasure – but he learned later that Lanigan was not responsible for his misfortune. WoO LMS points leader Rick Eckert of York, Pa., who started second, visited Fuller following the race and apologized for getting into him.

The event’s second caution flag flew on lap six for Eddie Kirchoff of Gillette, Wyo., who spun to a stop high in turn four. A winner of three of this season’s four DIRTcar Late Model features at Gillette, Kirchoff timed second-fastest in qualifying but was running outside the top 10 at the time of his problem.

Finishing in positions 6-10 was Doar, who scored a career-best finish on the WoO LMS; Eckert, who slipped backward but nevertheless ended the ‘Wild West Tour’ leading the tour’s standings by 52 points over Richards; Clint Smith of Senoia, Ga.; 17th-starter Jimmy Mars of Menomonie, Wis.; and Tony Leiker of Gillette, Wyo., who advanced from the 18th starting spot to earn the $500 ‘Bonus Bucks’ cash for being the highest-finishing driver who has never won a WoO LMS A-Main and isn’t ranked among the top 12 in the points standings.

NASCAR veteran Ken Schrader entered the event in a Clint Smith’s second car and finished 11th in the A-Main.

With 32 cars signed in for action, Eckert turned a lap of 14.682 seconds in Ohlins Shocks Time Trials to set fast time. It was his second such honor of 2011 and the 26th of his career on the WoO LMS – more than any other driver since 2004.

Heat winners were Eckert, Richards, Fuller and Lanigan. The B-Mains were captured by Mars and Leiker.

The WoO LMS will head back east for a triple-play in Pennsylvania, visiting Dog Hollow Speedway in Strongstown on Tues., July 26; McKean County Raceway in East Smethport on Wed., July 27; and Eriez Speedway in Hammett on Sun., July 31.