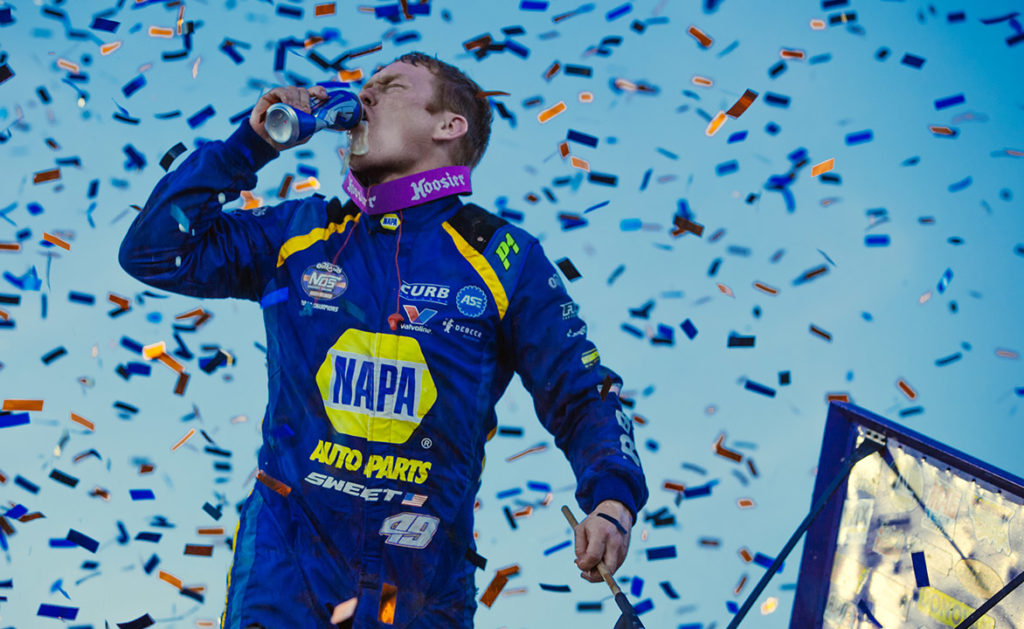 Brad Sweet took a quick glance at his right rear and shouted, “Woo! That’s all you need.”

“We had two unbelievable cars this weekend,” said Sweet during the historic CBS Sports Network broadcasted event. “I can’t thank my (Kasey Kahne Racing) guys enough for all of the hard work. It might look easy but I’m telling you this is a lot of stress; a lot of hard work and it’s paying off.”

While Sweet had to fight his way from ninth to the lead – further back than the night before when he went from seventh to the win – his NAPA Auto Parts #49 car still appeared to be in a different league. He had everything he needed. A good team. A good car. Good tires. And a head full of confidence.

However, his night didn’t start that way. Sweet’s name was rarely mentioned throughout most of the event. With a third-place finish in his Drydene Heat Race, Sweet was one spot short again of making the DIRTVision Fast Pass Dash, placing him ninth in the lineup for the 35-lap Feature.

David Gravel positioned himself as the early favorite by winning the Dash and claiming the pole for the Feature. With a large crowd of fans in attendance – who all passed through a state-of-the-art COVID-19 screening – and thousands more watching on CBS Sports Network, Gravel led the 24-car field to the green flag and pulled away.

His straightaway lead was cut to nothing when a caution came out for Scotty Thiel slowing on track on Lap 4. That positioned second-place Kerry Madsen to his outside and third-place Sheldon Haudenschild behind him on the restart. Gravel was able to pull away from the field again, but when he hit slower traffic a few laps later Madsen and Haudenschild closed in.

Their battle was like a yo-yo with Madsen closing in on Gravel and then fading back. Haudenschild would close on Madsen and then fade back. The three drivers did this for the next 10 laps before Kraig Kinser entered the picture.

Kinser worked his way by Haudenschild for third on Lap 18 and then got by Madsen for second 10 laps later. At the same time, Sweet made his presence known. Rolling around the bottom, Sweet worked his way through the field and passed Haudenschild for fourth with about nine laps to go. He almost stole third and second from Madsen and Kinser shortly after before a caution came out.

Sweet continued his masterclass of running the bottom on the restart and made quick work on Madsen and Kinser.

With seven to go, he passed Madsen for third. With six to go he passed Kinser for second. And with four laps to go, Sweet was at Gravel’s bumper.

Gravel was committed to the top, as it hadn’t served him wrong all race. But with three laps to go, Sweet passed him around the bottom like his Jason Johnson Racing #41 was down a cylinder. He then had to watch Sweet put his car on cruise control and drive away with the win – forcing Gravel to remain winless at the 3/8-mile track and take his sixth second-place finish there.

“After that first caution I didn’t know where to run,” Gravel said. “(Crew chief) Philip Dietz was telling me where to go. We were good on the restarts and I thought I felt the best on the top… We’ve just got more work to do. We really want to get a win. We’ve been struggling bad. A second and a fourth (for the weekend) is nothing to hang your head about, but when you lead these many laps you want to win.”

If you ask Sweet, he didn’t think he’d get to Gravel.

“The track started more wet than everyone thought and we were extremely tight,” Sweet said. “I felt like I was in a non-wing car there a few times. I was just trying to bide my time, you know, trying to realize it’s a long race and hope the cautions play into my favor. But when you have that good of a car, you can go on different parts of the racetrack than other guys.”

The win is Sweet’s fourth at Cedar Lake Speedway and seventh this season in 19 starts – his 57th career World of Outlaws win overall. The Independence Day weekend event is also the second event this year that he’s swept.

While Kraig Kinser missed out on the win, his third-place finish is his first top-five of the year and his first podium finish since a second-place finish at Skagit Speedway in August.

“We’ve been fast all weekend,” Kinser said. “We learned a little bit of what not to do during the Friday show. We were fortunate to capitalize on a good qualifying show. I got really good through the center of that race and probably got a little aggressive and I really think during that long run I might have heated my tires and blistered them up a little bit… The [Mesilla Valley Transportation] car was just rolling around good and was a dream to run tonight.”

Along with having everything he needed to pick up the win and $40,000 between the two-day show, Sweet also extended his points lead again – now 114 points ahead of second-place Logan Schuchart. Ten-time Series champion Donny Schatz remains third – now 116 points back. Both Schuchart and Schatz had a rough night, suffering flat right rear tires. Schatz finished 14th and Schuchart finished 16th.

The World of Outlaws NOS Energy Drink Sprint Car Series will continue its 2020 tour on Friday, July 10 at 34 Raceway in West Burlington, Iowa. Get tickets for the event by clicking here.

Then, on Saturday, July 11 the Series returns Wilmot Raceway in Wilmot, WI. Get tickets by clicking here.

And on Sunday, July 12 the Series returns to Terre Haute Action track in Terre Haute, IN. Get tickets by clicking here.

WHAT TO WATCH FOR: World of Outlaws Set for Crucial Weekend in Knoxville