WHAT TO WATCH FOR: Texas Two-Step at Cotton Bowl Awaits the World of Outlaws 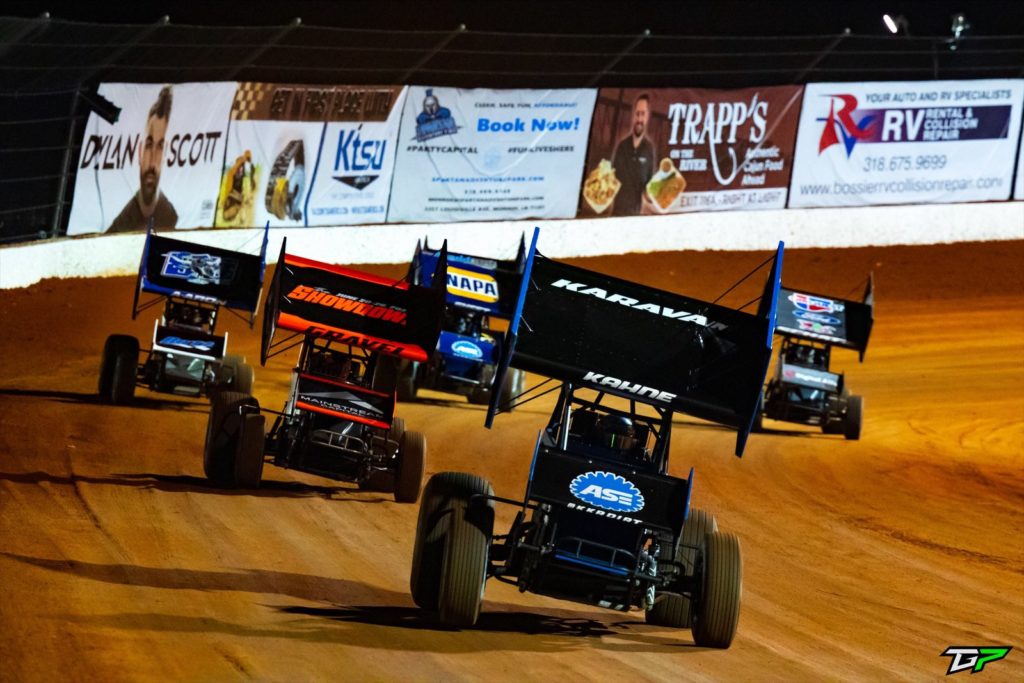 For the Lone Star State fans, this return to the Paige, TX 3/8-mile is a special one. From Mother Nature’s rain to the COVID-19 pandemic to State of Emergencies, fans have been stripped of the Outlaws at Cotton Bowl far too many times for too many different reasons. This weekend, that’s not happening.

A pair of previous Outlaw visits in 2016 and 2018 gave the Austin area fans a taste of The Greatest Show on Dirt with exciting last-lap passes and thrilling green-to-checkered wins. This weekend, fans get not only one show, but two full nights with the 900-horsepower machines.

Before the fun begins on Friday night, let’s catch you up on the storylines to follow:

HISTORY IN THE MAKING: The 2021 season is officially tied for the second-most diverse start in 44 years of competition for the World of Outlaws Sprint Car Series. The current streak of six winners – Brad Sweet, Logan Schuchart, Carson Macedo, Aaron Reutzel, Sheldon Haudenschild & David Gravel – is tied for the second-longest streak without a repeat winner alongside seasons in 1984, 2006 and 2007.

THE GREATEST SHOW ON DIRT – FOR A REASON: You get yours monies worth at a World of Outlaws show. Four of the last five races have featured a pass for the lead with less than ten laps remaining. There was Schuchart capitalizing on Schatz’s ignition box failure with two to go at Volusia; then Macedo’s charge from tenth to steal a Volusia victory from Hafertepe; then Haudenschild snookering Schuchart through lap traffic at The Mag; and most recently, Gravel beating Sweet in a barnburner at The Rev.

The good news? We’re heading to a track that has already proven to create some instant classics. During Cotton Bowl Speedway’s World of Outlaws debut in 2016, the feature provided three different leaders, two lead changes in the last ten laps, and a last-lap, last-corner pass for the win. Relive those highlights below for an idea of what to expect this weekend.

IT’S GOOD TO BE HOME: For Aaron Reutzel of Clute, TX, this weekend is a chance to get some much-needed and enjoyed time in his native state. A resident of Knoxville, IA these days, the leading Kevin Gobrecht Rookie of the Year contender appreciates every moment he gets to spend back home at his parents’ house with his family. He says “it’s like a weeklong vacation” any chance he gets to go racing in Texas.

Returning to Cotton Bowl Speedway for the first time as a full-time Outlaw, Reutzel will have a previous experience to rely on as he and Roth Motorsports chase their second win of the year. The multi-time ASCS National Tour champion ran second in a pair of ASCS regional races in 2013 and 2014, and he also has a top ten finish during the World of Outlaws debut at Cotton Bowl in 2016.

DONNY WANTS NEXT: Surprisingly enough, 10-time Series champion Donny Schatz is not one of the six winners this season. A win this weekend at Cotton Bowl would not only extend that streak to seven, it would also mean his 300th career World of Outlaws Sprint Car feature victory. In two previous trips to the Paige, TX facility, the Fargo, ND has finishes of fifth and ninth.

Although winless, Schatz and his Tony Stewart/Curb-Agajanian Racing, Carquest, Ford Performance #15 have been incredibly consistent, proven by their fourth-place points position. Through six races, Schatz has five top-five finishes and it would be a perfect six if it wasn’t for an ignition box failure while leading at Volusia. Could this be the weekend for #300?

THE RACE TO WIN #2: If any of the early-season track were to provide a repeat winner, Cotton Bowl would be among the favorites looking at previous results. Fresh off their jaw-dropping battle at The Rev, David Gravel and Brad Sweet return to a track they’ve both already won at. Sweet, driving his Kasey Kahne Racing #49, won the Series’ debut at Cotton Bowl in 2016 with a last-lap pass over Daryn Pittman. Gravel, now with Big Game Motorsports, is the most recent winner at the track with a wire-to-wire route in 2018.

Along with Sweet and Gravel, any of four including of Logan Schuchart, Carson Macedo, Aaron Reutzel, or Sheldon Haudenschild could be the first repeat winner of 2021 this weekend.