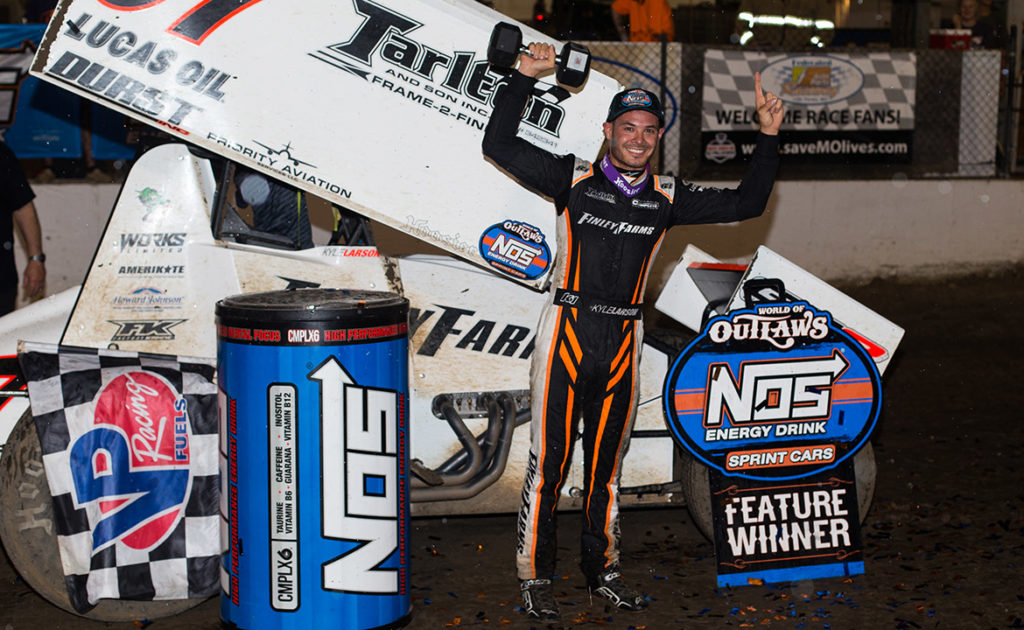 Rain was minutes away. The laps still showed five to go. Kyle Larson led with a hungry and determined Sheldon Haudenschild pushing his car to its limits to steal the lead and claim another Ironman title at Federated Auto Parts Raceway at I-55.

Larson already had a hard-enough time wrestling his own car around the fast 1/3-mile track. The cushion was unforgiving if not treated with care and 55 laps gave no pleasure to tired arms. He’s made winning look easy in 2020, but to win the Ironman 55 he had to prove his worthiness of the title.

Holding on with the might and skill of a seasoned driver every time his right rear tire and the cushion disagreed on space, Larson committed to the high line of the track to make the most speed in the closing laps. At the same time, Haudenschild worked any line he could to gain an advantage on the Finley Farms #57.

His effort couldn’t match Larson’s, though. The Elk Grove, CA driver brought the crowd to their feet and opened a hole in the sky by winning his first Ironman 55 title Saturday night with the World of Outlaws NOS Energy Drink Sprint Car Series and the $20,000 top prize.

“That was hard work,” said Larson, who looked to have just finished running a marathon. “A wild racetrack. I’m normally pretty calm after racing but my heart rate is still going. That was wild. You can’t say enough about everyone who helps out on this team. I tore up a car at Huset’s (Speedway) last week and these guys worked their asses off all week to get it ready.”

The Silva Motorsports crew put together a brand-new car for Larson after he wrecked the one he has dominated the year with at Huset’s. His first race in the new car was during the Friday night prelude to the Ironman and there appeared to be some bugs to still work out as Larson finished sixth – he hadn’t finished worse than second in his last five starts with the Series.

Those bugs only lasted a night as Larson and his team returned to form when the Ironman title was on the line. He qualified third, won his Drydene Heat Race and then dominated the DIRTVision Fast Pass Dash.

However, the early events were baby steps compared to the grueling and spellbinding marathon he had to run in the 55-lap Feature.

Larson led the first four laps of the Feature but bicycled off the cushion in Turn 4 and allowed second-place Jacob Allen to close on him. Allen then dove underneath Larson entering Turn 3 and slid in front of him to officially take the lead on Lap 5.

Allen said earlier in the day he needed to eat his Wheaties to be able to hang on for 55 laps around the fast-tacky track. He proved he did by initially pulling away from Larson after taking the lead. However, Larson closed back in on the Drydene #1A in traffic. Allen continued to prove his strength by holding off attacks by Larson lap after lap.

While they battled, Shane Stewart, in third, closed in. With 39 laps still to go, Stewart launched his Indy Race Parts #71 under both Larson and Allen in Turn 1 and sped down the backstretch with the lead.

For the next 34 laps, Stewart – the 2015 Ironman – held command out front. Behind him, Allen, Larson, Haudenschild and two-time Ironman champion Rico Abreu brawled for second. Larson nearly saw his night come to an end while battling with Abreu for second.

Abreu threw his car underneath Larson entering Turn 1, feeding Larson his right rear and sending the white #57 up the track and into the cushion. Larson’s rear end bounced off the cushion, sending his car sideways and facing the inside wall. He perfected a brilliant save and only lost one position to Haudenschild.

“I was so tight,” Larson said. “I felt good early out in clean air. The cushion was getting bigger and I was getting tighter. Jacob (Allen) got by. I was just praying the track would come to us. Wasn’t quite sure. I felt like at times I’m good. Then I’d get closer to people and I’d get really tight. It made it easy to make mistakes. Even when I wasn’t tight. The track did finally come to us.”

Soon after, a caution came out for Hunter Schuerenburg stopping on track. When the race resumed, Abreu jumped the cushion in Turn 4, bouncing around like a bucking bull. That allowed Haudenschild and Larson get by.

With 20 laps to go, the track conformed to Larson’s liking. He was able to put his car back on the cushion and rip the top. That led him back by Haudenschild for second and then to Stewart’s pumper with 10 laps to go.

Charging down the front stretch with a head of steam, Larson launched underneath Stewart going into Turn 1 and slid in front of him to reclaim the lead on the exit of Turn 2. Haudenschild also made his way by Stewart four laps later and then aimed to hunt down Larson.

With rain minutes away, the laps still showing five to go and Larson out front with a hungry and determined Haudenschild behind him, the conclusion to the Ironman left everyone at the edge of their seat.

Larson’s Ironman win is his 13th career World of Outlaws victory – tying him with Brooke Tatnell and Terry McCarl for 34th on the all-time wins list – and his fifth win of the year – second at I-55 this year.

Haudenschild’s runner-up finish concluded a solid weekend for the Wooster, OH driver and his Stenhouse Jr.-Marshall Racing as they won Friday night and gained points in the championship battle. Haudenschild is fifth in points – 80 points back from leader Brad Sweet.

“We came here to win and gave our best effort,” Haudenschild said. “Congratulations to Larson and his team. They’ve been really good. So has my team. Hats off to my guys, Nickolas. Ripper and Drew. They’ve been busting their ass and working hard to win these races. We wanted to get this NOS Energy Drink #17 in the winner’s circle, but we’ll take a second.”

Stewart, who had to settle for third, said he feels like he gave the race away.

“My car was so good,” said Stewart, of Bixby, OK. “I knew the track was going to change a little bit, but that cushion was so gnarly. I did hit it wrong a few times. It wasn’t from a lack of effort from my guys. We work so hard. We don’t race full-time but every time we show up, we’re competitive.”

Points leader and reigning champion Brad Sweet finished 10th, allowing the four drivers behind him in points to close in. Ten-time Series champion Donny Schatz and Logan Schuchart are now tied for second – 20 points behind Sweet.

For Larson, points are of no concern. He’s happy collecting trophies and celebrating with confetti and the occasional rain shower in Victory Lane.

The World of Outlaws NOS Energy Drink Sprint Car Series returns to Knoxville Raceway for “The One and Only” three-day event, Aug. 13-15, which includes the $50,000-to-win Brownells Capitani Classic presented by Great Southern Bank on Saturday. Get tickets by clicking here.

If you can’t make it to the track, you can still watch all three days of racing live on DIRTVision.