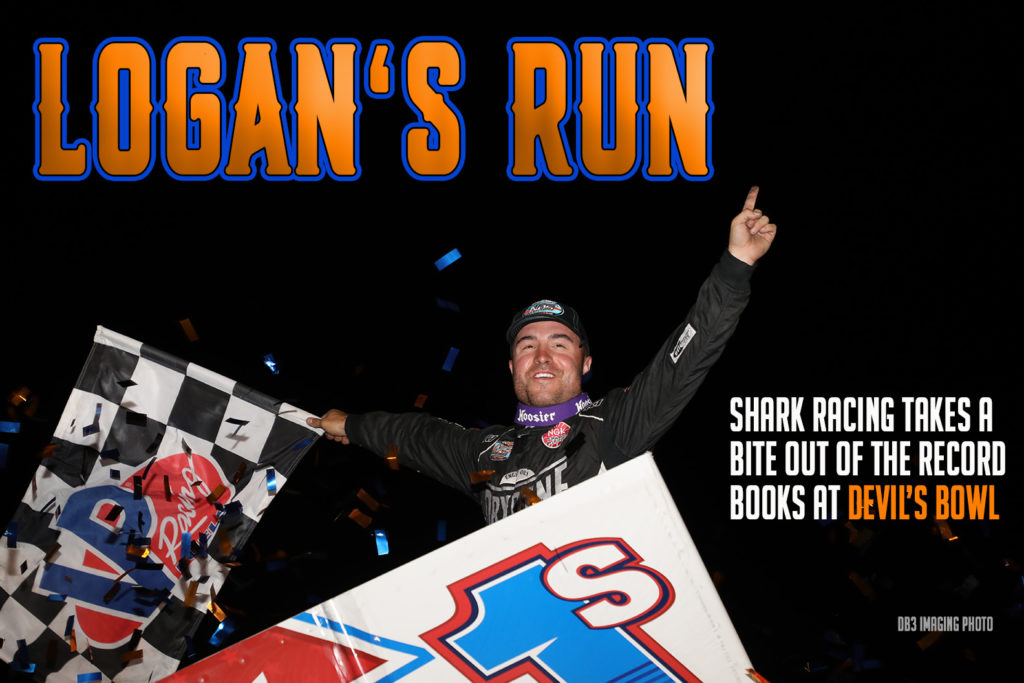 He wrote his name into the record books Friday night, claiming his first win at the historic Devil’s Bowl Speedway – the site of the inaugural World of Outlaws race in 1978 – and his 10th Series win overall.

Not only did he claim the win for the Pennsylvania-based Shark Racing team – owned by his grandfather – his teammate Jacob Allen led 10 laps of the 25-lap Feature and finished third – his first top-five this season.

Schuchart had to “cowboy up” for his first win of the season at the Stockton Dirt Track, wrestling with rough track conditions. He had to do the same again at Devil’s Bowl, but not because of the track. The competition.

After finding their way into the top-10 for the first time this season at Arizona Speedway, Kraig Kinser started on the pole for the Feature – after winning the DIRTVision Fast Pass Dash – and Jacob Allen started second. The two were the class of the field at the start of the race.

When the green flag flew, Kinser pulled away to the early lead. Allen nearly ended his race before it started. He had a slow start, allowing Daryn Pittman to get by him for second and was side by side with Schuchart for third going down the front stretch. But Allen was hooked on the high side of the track.

He bested his teammate through turns one and two, and nearly came side by side with Pittman down the backstretch before Pittman blocked his run. The next lap, Allen didn’t give Pittman the chance to pull the same move twice. He made his way by Pittman and set his sight on Kinser.

Allen took the lead by Lap four and began to put about a car length distance between he and the second-place car every lap. However, his pace put him in traffic by Lap seven.

Behind him, Schuchart and Pittman traded slide jobs turn after turn, lap after lap, fighting to claim third. Schuchart was the victory and led the train of he and Pittman to the front.

While the high side led Allen to the lead, it became his downfall. Schuchart and Pittman both found grip on the bottom of the track and made their way by Kinser and Allen.

“It made it tough trying to take the lead away from Jake,” Schuchart said about passing his teammate, who was going for his first win. “I’m going to race him just as hard as anybody else. He’s going to get his first win. He’s getting better and better every year. That breakthrough win is going to happen for this team.”

Pittman didn’t care about either of them winning. The Owasso, Okla. native wanted another win at the track just a few hours from his home. With about 10 laps to go, Schuchart slid up the track off of turn two, allowing Pittman to get a run underneath him and take the lead. But a lap later, Pittman made the same mistake, allowing Schuchart to get back by and charge to his first Texas Outlaw Nationals win.

“Gave that one away,” Pittman said. “The bottom just took off. It got so much faster in a hurry. Pretty frustrated, but we had a good car.”

“Obviously I want to win more than anything,” Allen said. “It is what it is, but I had fun. It’s really good to see Logan win and both Shark Racing cars on the podium. We work hard at this and this is what it’s about.”

Schuchart was the king shark Friday night, and even though he’s already matched his 2018 win total, he said that won’t change his approach to the rest of the season.

The Greatest Show on Dirt will make its next stop Saturday, April 13, at the historic Devil’s Bowl Speedway for the second night of the Texas Outlaw Nationals.