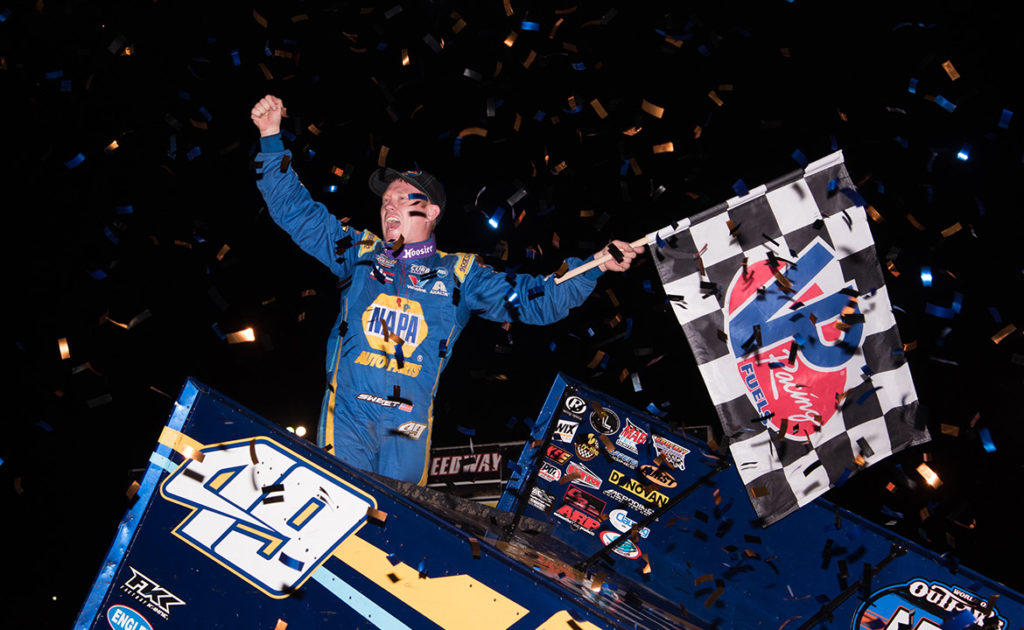 The clamor of 24 Sprint Cars in a gladiatorial battle at Silver Dollar Speedway faded into the calm Northern California night. Several minutes later a new clamor slowly elevated outside the quarter-mile track.

“We’re happy tonight,” said Sweet, of Grass Valley, Calif. “Tough racing out there. It’s treacherous. You never know which way the car is going to bounce or if you’re going to make a good corner or a bad corner. I just tried to stay up on the wheel. We pushed hard all night.”

His opening night had a sour start qualifying 14th of 30 cars. He rebounded in his Drydene Heat race by charging from fifth-place to second. That put Sweet in the DIRTVision Fast Pass Dash where he finished fourth.

The last three races at Silver Dollar Speedway had been won by a California native. The preamble to the Feature suggested that streak would see forth. Kaeding, of San Jose, and Golobic, of Fremont, occupied the front row for the Feature. Both won their Heat race. Golobic drew the pole for the Dash and ended up second to Kaeding.

In last year’s two Gold Cup races at the speedway, Kaeding finished second both nights – once to Sweet. He wanted one spot better this year.

On the initial start, Kaeding jumped to the lead but Golobic was able to find grip on the bottom and keep pace with Kaeding running the preferred line on the high side. Sweet powered around Donny Schatz for third and begin his trek to the front.

To get to Kaeding, Sweet had to go through Golobic first. And the young Californian forced Sweet to exert all of his talent to do so.

After restarting the race for a caution on Lap two, Sweet snuck underneath Golobic and passed him for second down the backstretch. Sweet cleared the NOS Energy Drink No. 17w car off turn four. With Golobic gaining momentum around the high side, Sweet also tried to block Golobic’s run off the corner but failed. Golobic turned underneath the NAPA Auto Parts No. 49 and charged back to second-place around the bottom of turns one and two.

Four laps later, with 23 laps still to go, Kaeding began to pull away and Sweet took another charge at Golobic. The Kasey Kahne Racing driver charged around the outside of Golobic in turns one and two. However, Golobic, continuing to use the bottom to his advantage, powered his way back in front of Sweet off turn four. Sweet attempted to dive underneath him into turn one, but Golobic closed the door.

He hadn’t won, yet. Two laps later Sweet put together another run to charge to the outside of Golobic. The duo raced side by side, Sweet high and Golobic low, for two laps. With 18 laps to go Sweet was able to prevail, holding onto second with a firm grasp.

Kaeding had about a straightaway lead, but lap traffic was coming into play.

Sweet worked his way to Kaeding by the halfway point of the race. He got to the outside of the R&B Company No. 7s and drag raced him down the front stretch. Kaeding out powered Sweet into turns one and two, but slid his right rear off track down the back stretch, allowing Sweet to dart underneath him and officially take the lead on Lap 17.

“I stepped on my ‘you know what’ one little bit coming off of two,” Kaeding said. “Just gave Brad that opportunity to get by us.”

Sweet said he had to be aggressive on Kaeding to take the lead.

“It’s Tim Kaeding at Chico, he’s never going to be easy,” Sweet said. “I watched him my whole childhood dominate this place.”

Kaeding was then subjected to the same war with Golobic that Sweet had to battle through. The two California’s battled hard, swapping second-place several times. Justin Sanders, of Watsonville, Calif., even joined in on the battle for a few laps. However, Kaeding and Golobic were able to best Sanders in the closing laps and duel for second amongst themselves.

Before Sweet could run away with his second win in-a-row – having won Wednesday’s race at Willamette Speedway – a caution with eight laps to go gave Kaeding and Golobic their final shot at taking down the “Big Cat.”

When the race restarted, Sweet wiped away any hope they had of doing so. He pulled away with the lead, leaving Kaeding and Golobic to make their last few swings at each other for second. Kaeding won that battle, while Golobic maintained a podium finish in third.

“I had a really good battle with Brad toward the middle of the race and there at the end me and TK (Kaeding) were going at,” Golobic said. “There were two different lines. I felt like I could run the top or bottom, make speed. I just really enjoyed racing with those guys. We’re kind of hanging our head a little bit about a third-place run, but in the big picture racing with these guys and finishing top-three is nothing to hang our head about.”

While Kaeding had to settle for second for the third time in-a-row, during the Gold Cup Race of Champions event at the speedway, he still left with a smile.

“This R and B Company 7s, Jason Sides Motorsports, this thing hauls ass,” Kaeding said. “Hopefully we can move up one more spot tomorrow night.”

For the second race in-a-row, Sweet left with the biggest smile, the trophy and $8,000 check. He and his team are building momentum again and chipping away at Schatz’s championship points lead. In the past two races, Sweet has cut the reigning champion’s lead in half – now 18 points behind the 10-time Series champion.

His focus is on Saturday night at Silver Dollar Speedway, though, where fans clamoring his name would mark a victory he’s been in search of for a long time.

“Now we’ve got to get the damn Gold Cup,” Sweet said. “I haven’t been able to get Saturday night. I grew up at this place. I don’t think I’ve missed one Gold Cup my whole life. It’s a great event.”

The World of Outlaws NOS Energy Drink Sprint Car Series on Saturday, Sept. 7, will return to Silver Dollar Speedway in Chico. Calif. for the Gold Cup Race of Champions. Get tickets and more information.