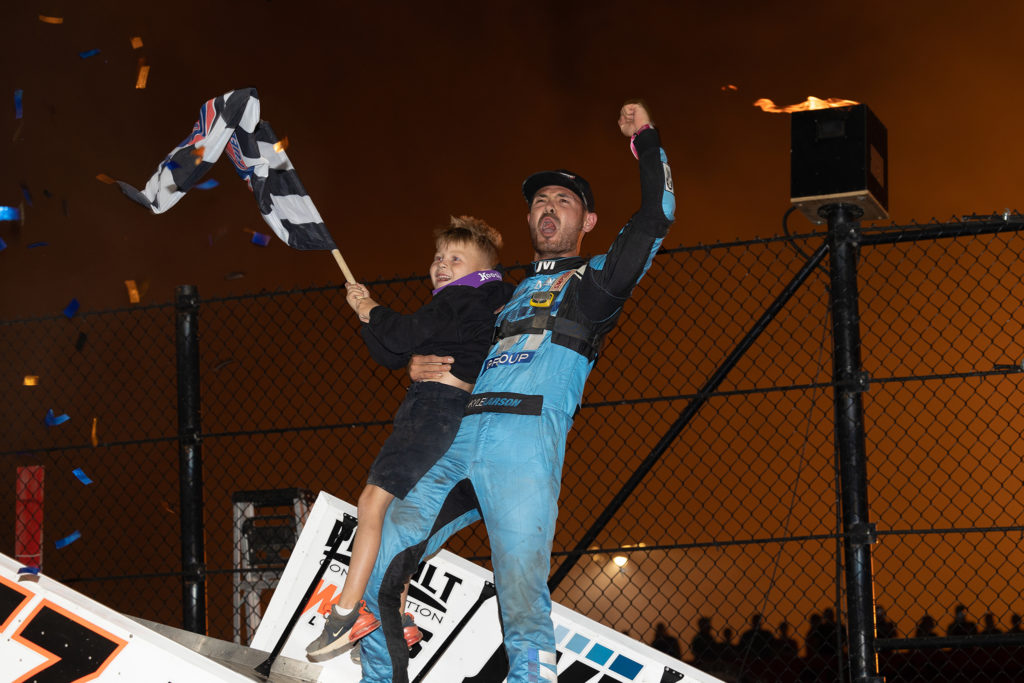 To many, Kyle Larson has already been as established a modern-day Motorsports great. However, on Saturday night, he was officially crowed “King Kyle The 38th” and took his rightful place on the throne.

Erasing the false narrative of his struggles in the sport’s biggest races, Larson finally secured his first-career World of Outlaws NOS Energy Drink Sprint Car Series Crown Jewel victory – a $175,000 payday at the 37th Kings Royal. He had previously finished a career-best second at both the Knoxville Nationals and National Open.

The Elk Grove, CA native overcame countless hurdles to earn the biggest dirt win of his career. First, there was the logistics of making his trip happen with the NASCAR Cup Series racing on Sunday in New Hampshire; second, things went south for Larson when he flipped during the afternoon’s LCS and damaged the car; third, he lined up from row five with eight of the best Sprint Car drivers in the world ahead of him.

By the halfway point, Larson had clawed his way to the top as he passed leaders Tyler Courtney and James McFadden. Aboard the Paul Silva owned Finley Farms, JVI Group, HendrickCars.com #57, Larson controlled the second half of the race and earned his first Kings Royal crown in his first-ever appearance.

“This is unbelievable,” Larson uttered. “This year has been so up-and-down, I didn’t think we’d be in victory lane after that flip. It’s just awesome to win a Crown Jewel in general.”

A crown jewel, indeed. While Saturday was Larson’s first-ever attempt at Lernerville, the 28-year-old superstar has previously finished second at both the Knoxville Nationals and the Kings Royal. He fell short each and every time, as the question arose more and more often.

Coming from ninth, Larson proved Saturday was no fluke by taking the $175,000 score with a beaten and battered car from his Last Chance Showdown crash in the afternoon. Ironically enough, the crash is what Larson claims best prepared him for this evening. ”

“I really think it was good for me to watch that Feature,” Larson explained. “I tried to simulate there what I saw earlier in the day, and it just worked out.”

“Overall, it was Larson’s 22nd career World of Outlaws Feature win, and then came the royal ceremony which made him the 37th King. After a rough-go almost every night, the $175,000 check was something Larson gladly accepted.

“It was just a bad week all around for Larson. A speeding penalty haunted him in the NASCAR Cup Series, then he spun out and never completed a lap of the Brad Doty Classic, and then there was his rough flip into turns and two.

Joining Larson on the podium was a quickly-closing Sheldon Haudenschild in the NOS Energy Drink #17 and Carson Macedo with another career-best Kings Royal finish of ninth.

Rounding out the top-five was the Clauson-Marshall Racing NOS Energy Drink #7BC team, which was chasing a$350,000 payday following Brown’s transfer.

Closing out the top-10 at the 37th Kings Royal was Giovanni Scelzi in sixth aboard a backup KCP #18, Spencer Bayston in seventh after running out of fuel earlier in the McGhee #11, James McFadden in eighth after leading a handful of laps around midway; Jacob Allen with a career-best finish at the event in ninth, and Danny Dietrich with his second top-10 of the day.