‘GOOD TO BE BACK’: Brad Sweet Returns To Victory Lane At I-80 Speedway 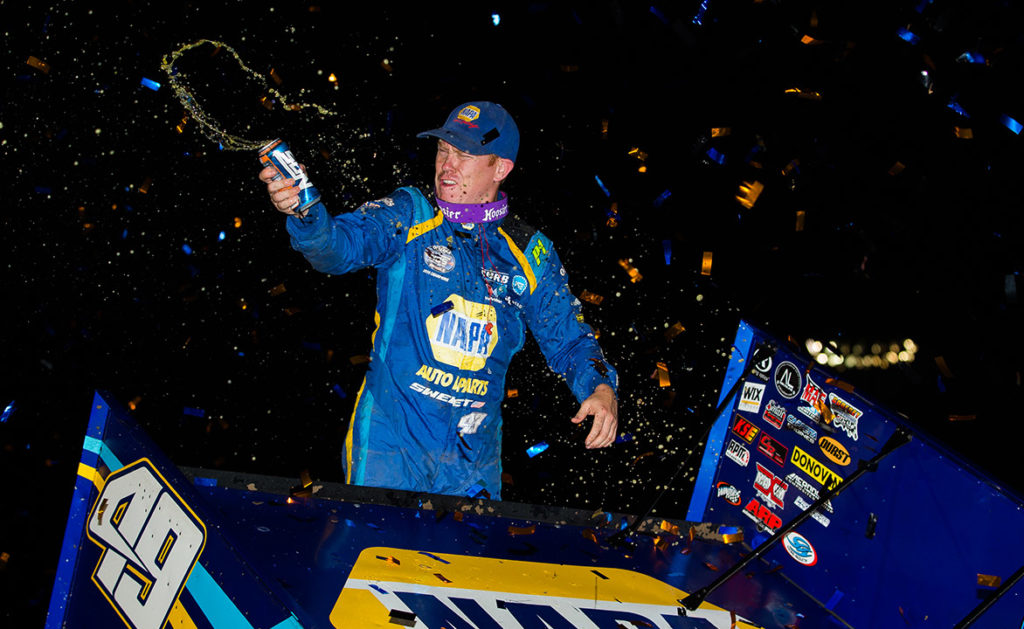 With half of a lap to go before Brad Sweet could see the checkered flag at I-80 Speedway Sunday night, yellow lights flashed around the track.

An accident between two cars racing for 18th evaporated the reigning champion’s 3.8 second lead over Carson Macedo and induced flashbacks of horror.

The night prior he lost the win on the last corner of the last lap.

“I couldn’t believe, take the white flag and the caution comes out,” Sweet said. “I thought, ‘Well, maybe it’s not meant to be.’”

It had been 57 days since his seventh win of the season at Cedar Lake Speedway in early July. Since then, he’s endured multiple nights of bad luck – suffering four DNFs – and heartbreak from wins that never were.

A green-white-checkered finished extended his anxiety an extra lap, making the Feature 31 laps in total.

He didn’t let that faze him, though. When the green flag reappeared for the final time of the night, Sweet mastered his throttle better than the field behind him and launched to about a four-car-length lead ahead of Macedo. From then on, he only extended it, giving no one the opportunity for a last lap pass. He crossed the finish line with a 1.5 second lead to claim his eighth win of 2020, his first at I-80 and 58th career Series win.

“It’s been some trying times,” said Sweet, of Grass Valley, CA. “This NAPA Auto Parts team never gives up. We’ve gone through DNFs and race cars and wild crashes. You know, things that we’re not accustom to. But that’s the adversity of the World of Outlaws tour. Never giving up and trying to stay positive each and every night. We lost a heartbreaker last night, so it is really easy to get down and get frustrated. But come back here and get the car better and better all night.”

The Kasey Kahne Racing team unloaded a dominate car for Sweet Saturday night, but on Sunday at I-80 they had to work toward that. He started the night with a 12th place qualifying effort and was able to translate that into a second place run in his Drydene Heat Race. Sweet managed to find the runner-up spot, again, in the DIRTVision Fast Pass Dash, however Dash winner Jacob Allen showed he had a car capable of delivering him his first career win.

That thought continued in the first 12 laps of the Feature with Allen able to fend off attacks from Sweet and Macedo.

After a restart with 18 laps to go, Sweet’s car came to life. He dove under Allen into Turn 3 and took the lead from him off Turn 4 to officially lead Lap 13. However, Allen got a run back underneath the NAPA Auto Parts #49 car and bolted back ahead of him into Turn 1.

Allen was unable to hold his car straight off the corner, allowing Sweet another run back underneath him. The two performed a ballet of slide jobs through Turns 3 and 4 with Sweet first sliding in front of Allen on the entrance of the corner to take the top lane and Allen throwing his car down into the corner before sliding back in front of Sweet on the exit of Turn 4.

Sweet cut back underneath Allen down the straightaway and rocketed ahead of him into Turn 1 to claim the lead and run away with it. Allen was then left to fend off his teammate Logan Schuchart, who had made his way from 14th to third, and Macedo in fourth.

As the laps clicked off, Allen eventually faded to sixth while Macedo fought his way back to second and Schuchart, in third, had his hands full with Sheldon Haudenschild – who worked his way up through the field from 18th.

Sweet found traffic late into the Feature and experienced little hinderance from them. Macedo cut a few tenths of a second off Sweet’s lead in the closing laps but had nothing for his fellow Californian once Sweet found clean air. The defending champion was on his way to a near four second victory.

Then, the caution came out. His apparent victory went on hold. Macedo had one last chance to get his second win of the year. However, Sweet had enough of heartbreak. He perfected the restart, picked up the $10,000 check and trophy and left Macedo to wonder, “what if.”

“I feel bad,” said Macedo, of Lemoore, CA. “My guys did a really good job. I felt like I had a car good enough to win there. I really made poor decisions on restarts I felt like… I felt like I was gaining on Brad a little bit and got into the fence over there in (Turns) three and four. I was driving super hard to try and get back by him. That’s the way it goes. He did a great job. That’s why he’s a World of Outlaws champion and I had a lot of fun racing with him.”

Schuchart was able to hold off Haudenschild – who earned the KSE Racing Hard Charger Award for coming from 18th to fourth – and finish third for the second night in a row, after having to change a motor before his Drydene Heat Race. He’s now tied with Sweet for the championship points lead.

“We had a fast race car, just some issues early in the night we had to fight through and keep on pushing,” said Schuchart, of Hanover, PA. “This is what it all come down to. You’re going to have bad nights. You’re going to face adversity and get back up there. That’s what this Drydene Performance Products race team did.”

The World of Outlaws NOS Energy Drink Sprint Car Series returns to the historic Huset’s Speedway in Brandon, SD on Sept. 5-6. Get tickets by clicking here.