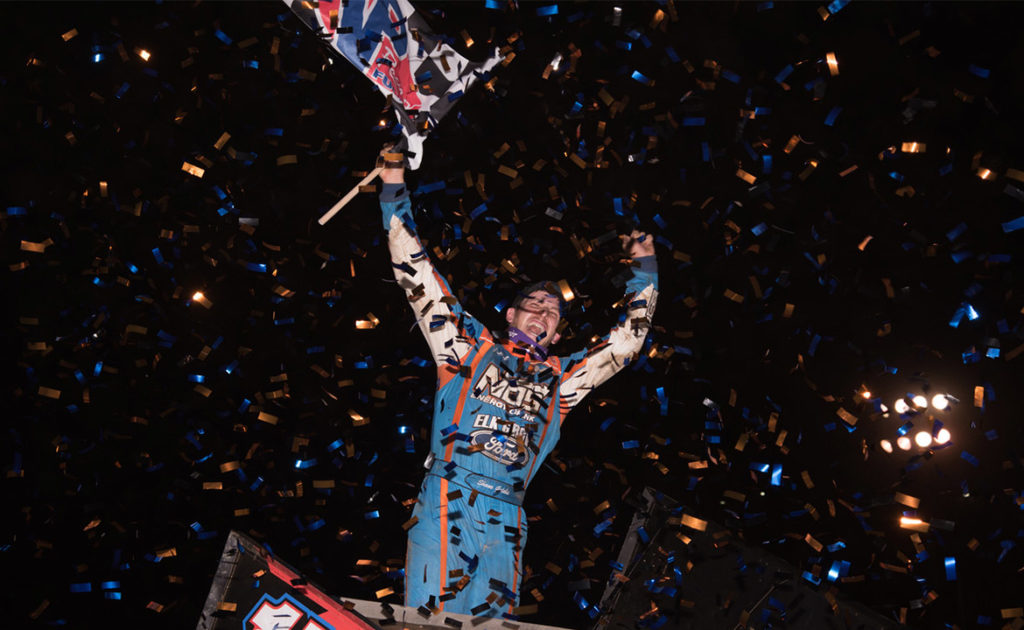 His first and only World of Outlaws NOS Energy Drink Sprint Car Series win came in 2013. Since then he’s questioned if he would or could ever win one again.

There was a clear answer Wednesday night during the 49er Gold Rush Classic presented by Riebes NAPA Auto Parts at Placerville Speedway.

Golobic tested the limits of his vocal cords from yelling inside his NOS Energy Drink No. 17w car. He couldn’t get out of it fast enough and do something his calm mannered self would rarely do.

He climbed to the top wing of his car, yelling and cheering, with the checkered flag in hand, letting the blue and orange confetti bath him while he celebrated his second World of Outlaws wins.

“I feel like two gives you a little more credibility than one,” said Golobic, who runs a part-time schedule with the Series. “I got the first one at a little short track, Antioch (Speedway). It was a none stop Feature, it counts as an Outlaws win one hundred percent, but there’s always that little bit of doubt. I’m not so much worried about other people, what they think, but just in me. You know, it’s been a few years since we done it. You just wonder if it is ever going to happen again. Tonight, we had the race car to do it.”

The victory was not handed to him. He worked for. All night long.

The Fremont, Calif.-native started the night by Qualifying fifth. He then went on to fight his way to a second-place finish in his Drydene Heat race and then to a fourth-place finish in the DIRTVision Fast Pass Dash.

The night was mostly ruled by Californians, winning everything but one Heat race which was won by Daryn Pittman, who drivers for the California-based Roth Motorsports team. Brad Sweet was the top Golden State driver for most of the night by winning his Drydene Heat race and winning the DIRTVision Fast Pass Dash. He also pulled double duty as promoter and driver for the race.

When the 40-lap Feature went green at the quarter-mile track in El Dorado County, Sweet jumped to the lead, leaving outside polesitter, and fellow California-native, Carson Macedo to battle with Kraig Kinser for second. Golobic ran fourth. However, after lap one Sweet was faced with the challenge of running his car with a broken lifter.

The field got five laps into the race before the first caution came out for Kyle Larson spinning in turn four. When the race resumed, Sweet marched back to the lead. Macedo stayed close by, though. Behind the front two, Golobic found his rhythm around the high side of the track and worked his way around Kinser to take third-place. He tried to contend with Macedo by sneaking to his outside, but the Kyle Larson Racing driver closed the door and focused on his trek to Sweet’s bumper.

Less than a car length’s distance separated Sweet and Macedo for the next 10 laps. Sweet ran the low line. Macedo hammered the outside of the speedway. The two Californians ran their lines with precision, neither gaining nor losing ground on the other.

However, on Lap 14 Sweet sailed his NAPA Auto Parts No. 49 car to the high side in turn three. The precision was lost. He bounced off the cushion, hindering his speed. Macedo had already reacted to Sweet’s lane change by diving to the bottom. Once Sweet bobbled, Macedo powered by him for the lead. Sweet charged back underneath him the next circuit around and nosed the rookie to the line to reclaim the lead on Lap 16.

Macedo was too strong up high, though. He easily worked his way back around the outside of Sweet for the lead. While the “Big Cat” kept Macedo in striking distance for the next eight laps, Golobic continued to run third.

The third caution of the night came out on Lap 24 for Jessie Attard coming to a stop in turn four. On the restart, Golobic and Sweet raced side by side down the front stretch and into the first corner. Sweet lost grip on the exit of turn two and entered the backstretch at a 45-degree angle. With a clean exit by Golobic, he hammered the throttle and cleared Sweet for second before turn three.

Sweet tried to fight back but didn’t have the speed. The lifter issue hindered his drive and he faded through the field.

With 10 laps to go, Golobic was about a second behind Macedo. He could still see the white No. 2 car in front of him, though. He could see a potential second World of Outlaws win still within reach. To get to it meant making more aggressive moves and using his knowledge as a local racer of the track to his advantage.

“With twenty-six to go, or whatever it was, on that restart I knew I needed to get a good drive down the straightaway and get to the top and click laps away and be there right behind Carson as close as I could when he did catch traffic,” Golobic said. “Took a peek at the board each time I went down the back straightaway.  That’s probably something I have an advantage of over other guys who don’t race here every week. They don’t have that in the back of their mind during the race. Saw thirty-seven laps were down and started turning it on.”

With three laps to go Macedo bounced off the cushion in turn three, allowing Golobic to close to his bumper and stay on him like a magnet the next lap. In their return to turn three, Golobic shot underneath Macedo and slid up in front of him on the exit of turn four to take the lead.

Macedo threw two unsuccessful slide jobs at Golobic the next two corners. When the checkered flag hung over the track, Golobic was the first to see it – his first World of Outlaws win at Placerville Speedway and second career Series win overall.

Macedo had to settle for second, while Justin Sanders worked his way to his first World of Outlaws podium finish of the year.

“I feel pretty bad for my team,” Macedo said. “I feel like I let that one go. I knew it was getting super technical up there (on the high side). I could catch lap traffic and they were kind of making the racetrack dirty under the cushion. I was struggling to get through there. Shane just did a really good job.”

Sweet fell to sixth-place but still took home a victory. As a driver he reclaimed the points lead over 10-time Series champion Donny Schatz, who finished 10th – now leading him by two points. And as a promoter, he saw a sellout crowd.

That California crowd erupted into cheers, drowning out Golobic’s joyous yells when he climbed out of his Matt Wood Racing Sprint Car. The local boy won. His confidence boosted. Doubt gone.

“Doubt is gone for sure,” Golobic said without hesitation. “Now, hopefully we can get a couple more. Two really means a lot to me, now three is going to mean a lot to me.”