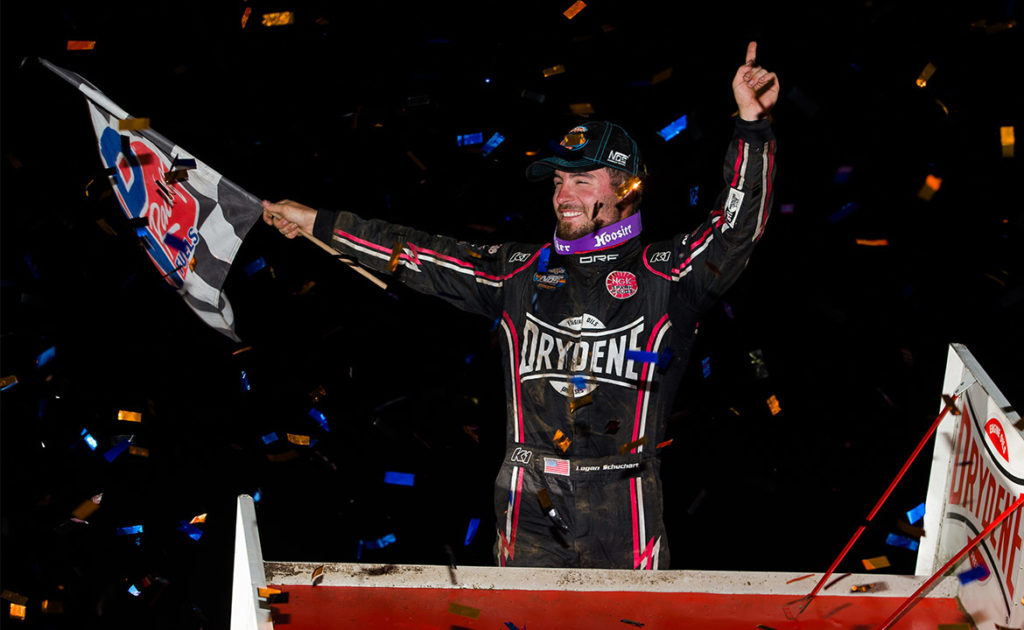 The sun was still minutes away from its decent into slumber when the green flag waved to start the Wabash Clash at the Terre Haute Action Track Sunday night.

Polesitter Logan Schuchart launched ahead of the field to maintain the lead for the first lap and then the rest of the night – claiming his fifth win of the season and first at the half-mile track.

However, the night sky painted the backdrop to Schuchart’s win after about an hour of intense racing and excitement.

“It was a test the whole time,” Schuchart said about the 30-lap Feature. “There were so many yellows and reds that it made me think a whole lot every yellow about what the car was doing and whether I was running the right line. You try to look for your guys to give you feedback a little bit. It’s just tough. You never know how far out front you are. We only come here every couple of years, and I think the last time here we finished eighth or something like that. So, big improvement and big testament for our guys.”

Eight cautions, which include two red flags – and an Open Red fuel stop – forced Schuchart to run eight perfect restarts. On each one, he had the likes of 10-time Series champion Donny Schatz, 2013 Series champion Daryn Pittman, 2019 Knoxville Nationals winner David Gravel and last year’s Rookie of the Year Carson Macedo starting alongside and behind him at various times. And on every start, he pulled away from each.

Schuchart rocketed ahead of the field every time the green flag waved and pulled away to about a second lead by the end of the lap.

He first outran Kerry Madsen, who started second, on the initial start of the Feature. Madsen faded, bringing Macedo up into second-place. The Kyle Larson Racing driver was unable to best Schuchart on the two restart attempts he was given.

On Lap 13, a part broke on Macedo’s car, sending him spinning into the front stretch wall. At the same time, reigning champion and current points leader Brad Sweet had a right rear tire go flat. Macedo was running second and Sweet was third.

Their misfortune put Gravel into second and Shane Stewart into third. Schuchart bested both of them on the restart, again pulling away. Stewart also worked his way by Gravel for second. Five laps later, Sweet had another part failure and went hard into the Turn 3 wall. That ended his night, giving him two consecutive DNFs – the first time that’s happened in his career since 2013.

When the race resumed, the field was unable to complete the lap before the red flag was thrown, again, for Ayrton Gennetten flipping in Turn 4 after contact with Kerry Madsen. Gennetten, in just his sixth World of Outlaws Feature, was having an impressive run inside the top-10. Before the accident, he was battling with Madsen and Schatz for a top-five position.

While Schuchart led every lap, Schatz had one of the most impressive performances of the night. He blew an engine in the Drydene Heat Race, forcing him to start last in the 23-car field. Schatz then went from 23rd to 15th in the first two laps and continued to pick off multiple cars on every restart. By Lap 22, he moved past Gravel to take third.

Pittman was Schuchart’s closest competition on a restart with 12 laps to go. For the first time all night, he couldn’t pull away. Pittman kept the Drydene #1S within reach. However, before he could try to dethrone the Shark Racing driver, a caution came out for Jason Sides blowing an engine.

The caution set up a three-lap heavy weight clash between Schuchart, Pittman and Schatz. But for the final time of the evening, with darkness now filling the sky, Schuchart continued his masterclass of restarts and drove away from Pittman and Schatz, leaving them to argue over second. Schatz won the battle – and the KSE Racing Hard Charger Award for the night – forcing Pittman to settle for third.

“We got ourselves qualified well tonight, but the Heat Race went to Hell in a handbag,” Schatz said. “So, that’s just the way it works. We had to dig ourselves out of a hole. It’s a pretty respectable night. We’d like to be a little bit better. We won’t hang our head on it. It’s trying at the moment, but we’ll dig through it. These (Tony Stewart/Curb-Agajanian Racing) guys are incredible at what they do.”

Schatz – second in points – has cut Sweet’s points lead down from 114 points to now 44 points in the last two races. Schuchart is third, 52 points back now.

His Terre Haute Action Track win marks his 21st career World of Outlaws win and one of the hardest he had to work for.

“It was a guessing game every restart, whether (the best line on the track) was going away or if I didn’t have my wing speed yet,” said Schuchart, of Hanover, PA. “It’s a great race car. Thanks, again, to my guys. We didn’t feel great after the Heat Race and in Qualifying I felt slow and didn’t know what to change. Sometimes it’s harder on these big racetracks. It can feel straight and smooth but you’re just slow. It’s hard to tell what you need to change. We made the right changes and we’re able to get here in Victory Lane.”