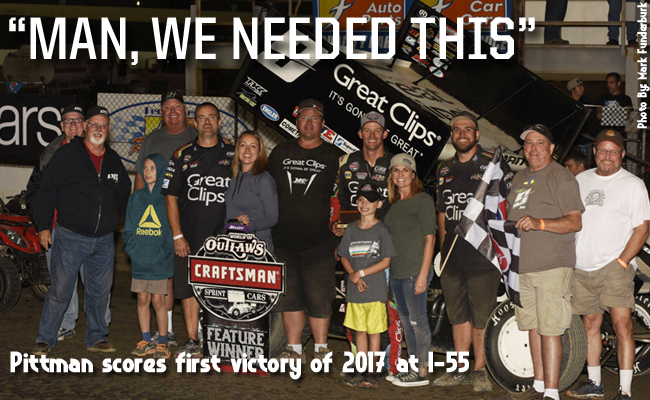 Daryn Pittman Scores First Victory of 2017 at I-55

PEVELY, MO – August 5, 2017 – It’s been a long time coming for Daryn Pittman, who secured his first win of the season Friday night at Federated Auto Parts Raceway at I-55. The 2014 World of Outlaws Craftsman Sprint Car Series Champion has had a trying season by his standards. Friday night, he was able to fend off the eight-time and defending Series Champion Donny Schatz, including on a late-race restart with six laps to go.

“Man, I needed that. I think this team needed that,” a relieved Daryn Pittman said upon exiting his Great Clips No. 9 for his first win of the 2017 season Friday night at Federated Auto Parts Raceway at I-55.

“I’m blessed to be able to drive for Kasey [Kahne],” Pittman said in Victory Lane. “I was on the phone with him all night. He worked on this thing during the week and put in a setup that I would have bet everything in the world would not have worked,” Pittman said with a smile. “Thanks to DIRTVision.com for the great coverage so he could watch up in New York.”

Although Pittman led all 35 laps it was far from an easy victory. Donny Schatz stalked the Owasso, Oklahoma-native for the majority of the race.

“You get nervous when you’re leading, even when it is hard to pass, when that No. 15 car is behind you. He has stolen more than one rubber race away from me pretty late,” Pittman said of the eight-time series champion, Schatz.

Schatz took a peak to the outside of the Kasey Kahne Racing No. 9 momentarily in turn three, “You got to try something if given the opportunity,” the current Series point leader said.” All around it’s a decent finish. We haven’t been in the top three here in a little bit, so I’m glad to get to a good finish.”

Sheldon Haudenschild came home third, in what was his Federated Auto Parts Raceway at I-55 debut. “I’m happy. I feel like we haven’t been on the podium since California,” Haudenschild said jokingly. Although it was Sheldon’s first visit to Pevely, his crew chief Bonzai and father, Jac, have many laps around the bullring. “Having Bonzai on our team for these tracks I’ve never been to has been huge,” Sheldon, the leading contender for Kevin Gobrecht Rookie of the Year, reiterated.

The World of Outlaws Craftsman Sprint Car Series returns to the Federated Auto Parts Raceway at I-55 Saturday night August 5th for the running of the Ironman 55, which pays $20,000 to win. Grandstands open at 2pm.