ROCKET LAUNCH: Sheppard Sweeps ‘Inside Out’ Weekend at Davenport 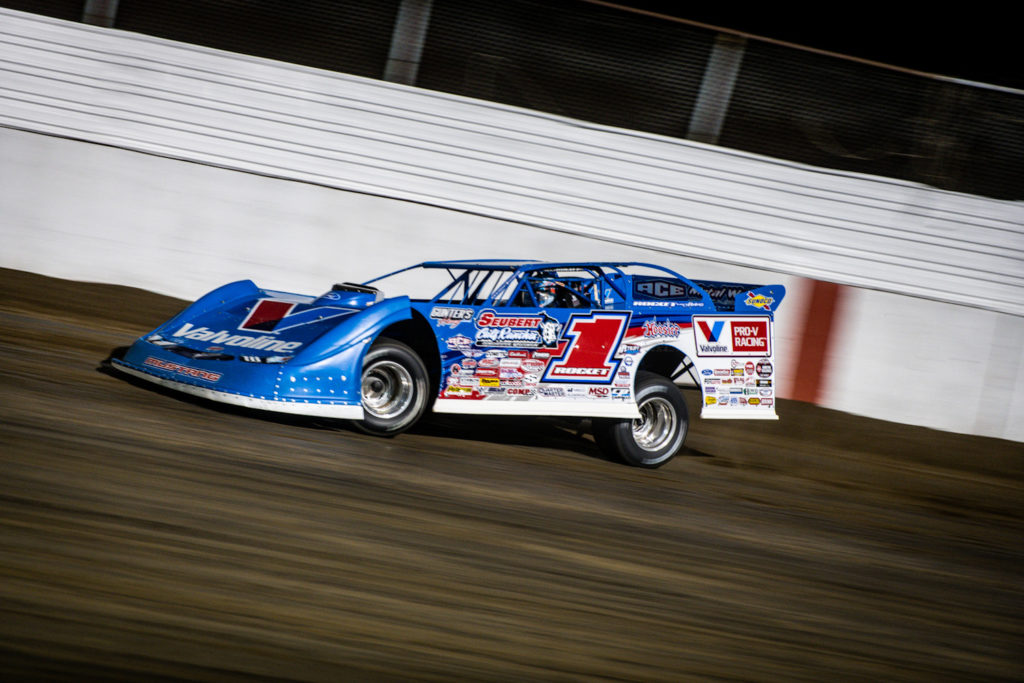 DAVENPORT, IA — America witnessed history Saturday afternoon when Elon Musk and NASA successfully launched a manned rocket into orbit and towards the International Space Station as part of the Space X mission.

A few hours later, race fans on DIRTVision saw Brandon Sheppard launch his own Rocket1 Racing #1 to victory lane at Davenport Speedway’s 1/2-mile dirt oval to complete a weekend sweep of the ‘Inside Out’ doubleheader presented by Hoker Trucking. Sheppard conquered the 1/4-mile in thrilling fashion on Friday night.

“It feels so great to be back in victory lane,” Sheppard said after notching his second straight win. “We got our confidence back (Friday) night, it was a tough fought battle, but we did it. Tonight, everybody’s confidence was higher. We qualified good, won the heat race, and that was the key to getting another win. I can’t thank Mark, Dan, Austin, Joel, and all the guys back at the shop enough; this car has been a dream to drive.”

Drawing fourth in the Morton Buildings feature redraw, Sheppard had to start the 40-lap feature from the outside of row two behind Frank Heckenast Jr. of Frankfort, IL, and Ashton Winger of Hampton, GA, on the front row. For fans watching at home, Winger was certainly the cinderella story of the night. With limited 1/2-mile experience, the 20-year old Rookie of the Year leader put together a brilliant heat race win and drew the outside pole of the Feature event.

It was all Heckenast at the start as he rolled the inside line aboard his No. 99JR. Bobby Pierce, who set QuickTime in Flight A of qualifying and won his heat race for the second night, quickly worked by Winger to move into second with his eyes set on a first career World of Outlaws win. It became a Land of Lincoln 1-2-3 when Sheppard brought the high side to life and ripped the outside by Pierce and then by Heckenast to take the lead on lap five.

A chaotic caution on Lap 10 saw the night end for Scott Bloomquist of Mooresburg, TN, and send a gaggle of others including Ricky Thornton Jr., Jason Feger, Brent Larson, Matt Cosner, and Boom Briggs all to the work area. Another heartbreaking caution at the halfway mark meant the downward spiral of Winger, the rookie sensation, who would have to fall to the tail after running inside the top five.

While Sheppard was in command, the frontrunners behind him continued to swap spots as Pierce, Heckenast, Chris Madden and a charging Jimmy Mars dueled on the half-mile speed factory located on the Mississippi Valley Fairgrounds. A debris caution on Lap 27 created a restart after Pierce hit the outside wall so hard that he knocked a few boards off the fence onto the track. After that contact though, the #32 slipped on the restart letting Mars and Madden by, with Pierce eventually fell to sixth.

Marking the final restart of the race, Sheppard continued to sneak away from the field as he tested every inch of the 1/2-mile surface. In the end, B-Shepp drove away to a 2.086 second advantage as he crossed the stripe for his 58th career World of Outlaws Morton Buildings Late Model Series victory. Completing a clean sweep of ‘Inside Out’ weekend presented by Hoker Trucking, Sheppard and the Rocket1 Racing crew used the Davenport Speedway doubleheader to find that missing confidence and return to their winning ways.

“After the checkered, I actually went to the bottom in turns three and four and I think I might have been even better than I was on the top,” Sheppard noted. “Getting out front in clean air and maintaining the lead all comes with qualifying good and winning heat races. In order for this consistency to stay good, we gotta keep doing that.”

Mars of Menomonie, WI, was Saturday’s runner-up finisher after he completed an impressive charge from the 11th spot. The World of Outlaws veteran noted his No. 28M was capable of handling the half-mile from just about every angle and wished he would’ve aced qualifying more.

“Before it started to rubber there on the bottom, we could run the top, we could run the bottom, the car was really good,” Mars said after the checkered. “Scott [Bloomquist] and I got together down there backstretch early on, so I gotta apologize to him. I lifted as much as I could, there wasn’t much else I could do. I messed up qualifying and dug us in a hole, but once we got going in the heat race we really picked it up.

Madden of Gray Court, SC, snapped a 10-race drought from the top three with his third-place finish. For “Smokey” and the Scott Bloomquist Racing, Team Drydene #0M, it’s all about using this run to build their momentum and get some confidence back.

“We’re still missing a little bit, but we’ve come a long way from the last few weeks,” Madden mentioned of his struggles lately. “We’ve been working hard on these cars, and I think we found a few things this weekend here. We just gotta carry this momentum into next week. If we keep up the podium finishes, hopefully that will lead to some wins. At the end of the day, we’re competitive; so we’ll take it and drive with it.”

Cade Dillard, who suffered a blown motor in hot laps, concluded his night with a remarkable 19th-to-fourth haul that was good enough to take away hard charger honors. Heckenast Jr. completed the top five while Pierce, Dennis Erb Jr., Ricky Weiss, Shannon Babb and Chase Junghans rounded out the top 10.

Both nights at Davenport Speedway were broadcasted live on DIRTVision as the grandstands were closed to fans due to mass gathering restrictions in Iowa.

The World of Outlaws Morton Buildings Late Model Series will take next week off as invited competitors nationwide converge on the Dirt Late Model Stream at Eldora Speedway on June 4-6. After that, the Outlaws are scheduled to RETURN to RACING at Cochran Motor Speedway in Cochran, GA, on Friday and Saturday, June 12-13.

ONE WEEK AWAY: World of Outlaws to Open 2021 at Volusia’s Sunshine Nationals