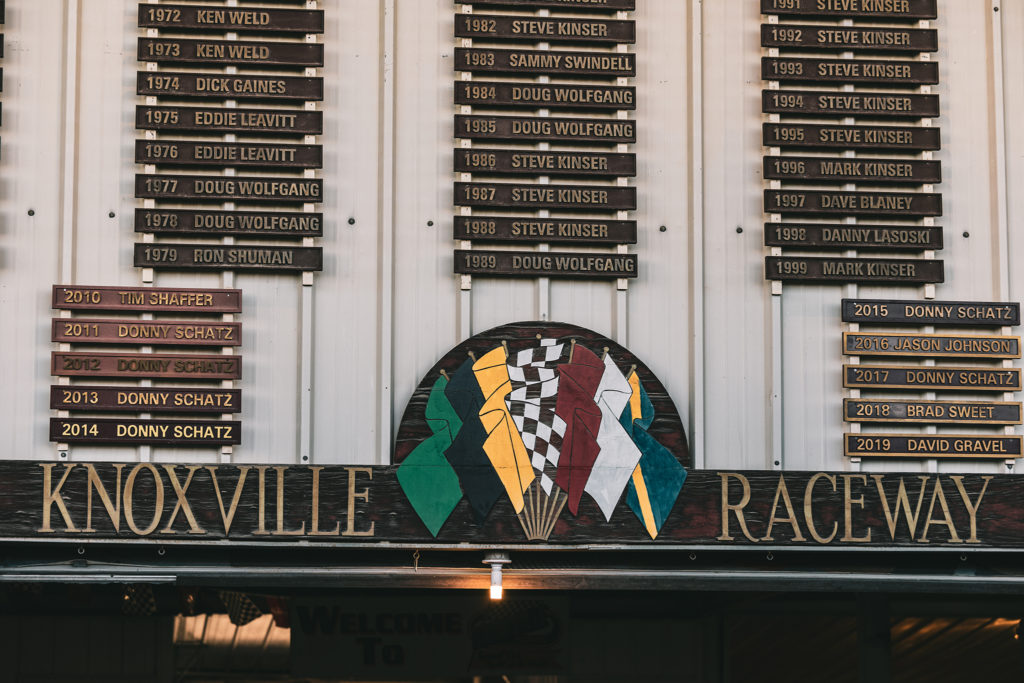 The Granddaddy of ‘Em All has arrived. It’s the Knoxville Nationals, people.

On Wednesday, we officially kick off the 60th running of this historic event at Iowa’s famed Knoxville Raceway.

More than 100-plus NOS Energy Drink Sprint Cars are already pre-entered and the anticipation continues to only climb for this mega event.

Here are just a few of the many notable storylines:

CHASING KINSER: With 10 Knoxville Nationals titles to his credit, Donny Schatz sits only two away from matching “The King” Steve Kinser with the most in event history at 12 wins. After a rather public roll-out of the new Ford Performance (FPS410) engine, Schatz’s struggles have been well documented all season long with only one win. However, he and the Tony Stewart/Curb-Agajanian Racing #15 team sure seemed unfazed on Sunday when they ran third at the Capitani Classic. The 300-time World of Outlaws winner will qualify the Carquest entry in Wednesday’s preliminary field.

SUNDAY SCORE: David Gravel and the Big Game Motorsports #2 won the first battle of the week, claiming Sunday’s 10th annual Capitani Classic atop the black zook clay. The reigning Knoxville Nationals champion will have a chance to become the eighth different driver to win back-to-back titles, and that quest begins with his Thursday night preliminary. The good news for Gravel is the last two Knoxville Nationals champions have started their week with a triumph at the Capitani Classic, including himself in 2019 when he swept all three races he ran.

360 NATIONALS: Winning the Knoxville 360 Nationals only four days before the Knoxville 410 Nationals is the kind of momentum every driver dreams of. For Giovanni Scelzi, that’s exactly what he did on Saturday at the 1/2-mile aboard his KCP Racing #18. He became the youngest winner in event history by outlasting former World of Outlaws champion Daryn Pittman in an instant classic that came down to the last lap. Both Scelzi and Pittman will look to carry that speed into their preliminary shows as they each chase their first 410 titles.

THE IRONMAN: For the second-straight Knoxville Nationals, Sheldon Haudenschild enters as the reigning Ironman following his victory at Federated Auto Parts Raceway at I-55 on Saturday night. The only bad news for Sheldon is since the Pevely, MO event was created in 2009, every single winner has failed to win the Nationals one week later. With winning experience under his belt at Knoxville and a fifth-place finish in Sunday’s Capitani Classic, Haudenschild believes he can end that streak this week. His NOS Energy Drink #17 will qualify during Wednesday’s preliminary night.

BACK IT UP: In June, Carson Macedo was the talk of the town when the World of Outlaws swept through Knoxville. The Lemoore, CA native won both nights on the 1/2-mile, giving him his first and second career victories at The Sprint Car Capital of the World. With Crew Chief Philip Dietz, who won the 2016 Nationals with Jason Johnson and 2019 Nationals with David Gravel, Macedo feels more confident than ever entering the August tradition. They’ve left this particular Maxim Chassis sitting on the shelf since sweeping in June, threw in a new Kistler Engine for this week, and have a special design for Thursday’s preliminary night.

CLAWING FORWARD: The Big Cat Brad Sweet is sitting pretty with a third-straight World of Outlaws championship in sight, but he’s made it clear his goal remains winning the Crown Jewel races. The 2018 Knoxville Nationals winner is aiming to join an elite club as the eighth multi-time champion in event history with another score this week. However, the Kasey Kahne Racing squad will have to overcome some Knoxville struggles this season to get the job done. The NAPA Auto Parts #49 won once in weekly competition here, but finishes of 6th & 16th with the Outlaws and an 11th at the Capitani Classic will need improvement this week.

ROTH QUESTIONS: Since Aaron Reutzel’s suspension six days ago, Roth Motorsports has been the hottest topic in all of Sprint Car racing. The question around town in Knoxville and on social media is who will drive the #83 at the Knoxville Nationals. The Dennis Roth led operation tabbed Parker Price-Miller to run the #83 at I-55, and they shined bright setting QuickTime both nights and leading laps, but PPM has commitments to Guy Forbook’s #5 this week. The rumors have been flying off the wall left and right with names from sea to shining sea tossed around. The only concrete thing, though, is no official driver has been announced yet for their Thursday preliminary night.

KINGS COURT: Both King Kyle XXXVII and King Tyler XXXVIII will be in action at the Knoxville Nationals this week, and both will compete in Thursday’s stacked preliminary field. Larson, who just won Sunday’s NASCAR Cup Series race at Watkins Glen, is hopping on a plane and making his way to Iowa to drive the Paul Silva #57. The California sensation has five A-Main starts but has never conquered the Nationals. For Sunshine, he and the Clauson-Marshall Racing, NOS Energy Drink TURBO #7BC are chasing their first appearance in Saturday’s A-Main, which pays $10,000 just to start.

SLAMMIN’ SAMMY: No driver has contested more Knoxville Nationals than Slammin’ Sammy Swindell. He’ll make his 46th appearance this weekend with the potential to qualify for his 35th A-Main, which would tie him with Steve Kinser for the most A-Main appearances all-time. The 1983 Knoxville Nationals champion will pilot the Pete Grove owned #70 in Thursday’s preliminary field.

CHOMP CHOMP: With a fresh engine aboard the Shark Racing, Drydene Performance Products #1S, Logan Schuchart will be a lethal contender in Wednesday’s preliminary. Remember, the last Knoxville Nationals in 2019 is when the Hanover, PA native put together a miraculous 22nd-to-2nd charge and netted $75,000. Before racing begins, Schuchart and the Shark crew will be unveiling their Nationals designs on Tuesday at 2pm CT at the Sprint Car Hall of Fame.

‘MO MONEY: The prestige of the Knoxville Nationals alone is worthy of drawing 100+ cars, but the money is a whole different matter. With the added lap money, the 60th running this week boasts a purse of $1,064,855, the highest in the history of Sprint Car racing. Saturday’s champion takes home $150,000 for winning, but every lap led is an additional $1,000, meaning the potential is there for a $200,000 payday. The best part of Knoxville’s purse is the healthy structure of pay, offering a season-changing $75,000 for second, $37,500 for third, and $10,000 just to make the Feature.

FAREWELL KNOXVILLE: For the 39th and final time, Jac Haudenschild will contest this week’s Knoxville Nationals as part of his Farewell Tour. “The Wild Child” drives for Rico Abreu in the iconic Pennzoil #22, a replica of the car owned by Jack and Carol Elden in the 1990s. Jac won two preliminary Features and started on the pole of the 1998 Knoxville Nationals in that very car. On Thursday, he’ll begin his week in preliminary action, and on Saturday, the National Sprint Car Hall of Famer will run his final laps at the Knoxville Nationals.

ALL ABOUT POINTS: The best route to a Knoxville Nationals crown is through the front row, and the only way you make it there is with a phenomenal preliminary performance. The more points, the closer to the front. On prelims on Wednesday and Thursday, Qualifying rewards 200-198-196-etc. with Heat Races paying 100-97-94-etc. and the Feature again offering 200-198-196-etc. A perfect night would tally 500 points, something only done once in the last 25 years.

PERFECT TIMING: When you think of the most surprising drivers without a Knoxville Nationals, Brian Brown is right at the top of the list. Brownie is tied with Joey Saldana for the most second-place finishes (3, 2012-14) without a win to his credit. However, if any year were to be his year, 2021 would be quite fitting for #21. Since handing the wrenches to his uncle and Knoxville Raceway legend Danny Lasoski, the Casey’s General Stores, FVP Parts machine has found a whole new gear. The Grain Valley, MO native will try to win his third Nationals preliminary Feature in Thursday’s field.

THE INVERT: Arguably the most exciting racing of the week comes in the form of Heat Races during Wednesday and Thursday’s preliminary nights. Following Qualifying, the field is lined up in five, 10-lap Heat Races with an eight-car inversion. Meaning you go fastest and you start eighth in the first Heat. It gets tougher from there because only the top-four finishers in the Heat Races will transfer directly to the preliminary Feature.

MARION COUNTY LOCALS: One of the greatest aspects of the Knoxville Nationals is seeing the wide array of competitors all battle on the same turf. This week brings the World of Outlaws, the All Stars, the PA Posse, the Cali clique, and so many more to the Marion County Fairgrounds to race for big money and history. It’s the ultimate opportunity for Knoxville regulars to make a lasting mark. Among the contenders, this week are points leader Davey Heskin and two-time winner Justin Henderson on Wednesday, plus Austin McCarl and Brian Brown on Thursday.

ROOKIE OF THE YEAR: Of the 100-plus entries, currently 16 of them will be vying for the Rookie of the Year honors. Those sticking out include Zeb Wise, an All Star Circuit of Champions full-timer substituting for Buddy Kofoid in the potent CJB Motorsports #5XX, and Missouri’s Ayrton Gennetten who has Knoxville ace Chad Morgan on the wrenches of his #3. Both young guns will participate in Wednesday’s preliminary.

MR. SPRINT CAR: Since 2002, the tradition of Southern Iowa Speedweek has seen one driver who consistently outperformed his competitors in a variety of events at different tracks crowned as Mr. Sprint Car. This year’s award in honor of Jesse Hockett is presented by Beaver Drill & Tool with a boosted purse of $6,000 to the winner, $2,500 to second, and $1,000 to third. As of now, Justin Henderson (132) leads the way with Shane Golobic (132), Cory Eliason (129), Giovanni Sceliz (128), and Tyler Courtney (114) following.