Donny Schatz Gets 14th Win of the Season 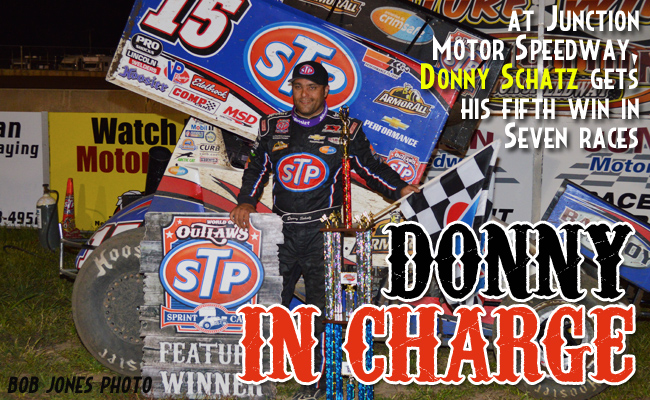 MCCOOL JUNCTION, Neb. — Aug. 12, 2014 — Tuesday night at Junction Motor Speedway Donny Schatz proved once again why he is the man to beat in the race for the World of Outlaws STP Sprint Car Series championship as he notched his 14th win this season.

Schatz, who came into Junction Motor Speedway after his eighth career Knoxville Nationals win just days earlier, has scored wins in five of the last seven Outlaws events with his STP/Armor All team.

“Yeah it’s been good lately, kind of like living in a dream,” Schatz said after leading 20 of 30 laps in the feature. “It happens, so I’m enjoying it.”

Schatz started Tuesday night’s feature in fifth place, as Paul McMahan and Kraig Kinser led the field to the green flag. As Kinser fell back by lap five, Schatz had moved into the third position.

“We just kind of had to pick them off there one-by-one,” Schatz said. “And the track changed a little bit and it’s easy to slip the tires so that’s something that these guys have always been good at – getting the car underneath me.”

Schatz caught McMahan, the leader, by lap eight and began putting pressure on the driver and his CJB Motorsports car. Schatz got his opportunity the next lap as he slid McMahan through turns three and four and was able to make it stick as the drivers exited onto the frontstretch.

As the two drivers worked their way through lapped traffic during the middle part of the race, McMahan worked to close the gap between he and Schatz.

“It’s your job to push it to the extremes and sometimes you have to push it to be able to get by lapped cars,” Schatz said. “You can’t sit back and wait, you’ve got to go and if there’s an opportunity, you better take it. Racing with the best guys in the country, there’s no question you’ve got to be on your game.”

Farther back, Kinser was making his way back to the front, battling with and then passing Brad Sweet to get his Mesilla Valley Transportation car back into the top-three.

“I fell so many spots at the beginning,” Kinser said. “I think it just caught us off guard how the bottom came in in one and two there as good as it did. I got up there and I was just bouncing around the first couple of laps, fell back a little bit and I just had to scrape to get back up there. It was tough to pass and we were still ripping around there pretty quick on the feature time. So the car started coming to me later on the runs went. By the end of it I felt pretty good but by that time the white flag was already out.”

As the feature wound down, Schatz had built up a sizeable lead over McMahan. It almost slipped away though as Schatz experienced trouble in the closing laps.

“I’m not sure if I spun the tire real hard trying to get around someone or what but it was almost like I couldn’t hit the bottom in three and four anymore – it could have been a byproduct of maybe we just wore it out,” Schatz said. “It happens. We’re racing on dirt and I could get around the bottom so good and all it takes is spinning the tires wildly one time. You can have that happen. The car still felt great. I just could have moved my line a little bit – I didn’t. Good thing we seen the white flag and checkered.”

In the race for the championship Schatz extended his points lead over second place Daryn Pittman to 140 points. Schatz won the KSE Hard Charger Award tonight after he advanced four positions before winning the feature.

McMahan said he was disappointed to not get the win, but commended his team for giving him a good car and Schatz for the stiff competition.

“Donny’s just unbelievable right now,” McMahan said. “As soon as August rolls around that guy just picks up his game 200 times better than what he was. We had a good racecar. You know he was just better than we were. (Crew chief Barry Jackson) gives me a great racecar, I just don’t think I could have done anymore tonight.”

Consistency has been McMahan’s greatest strength this season, where, in addition to four wins, he has 55 top-ten finishes – tied for the most on the season. McMahan sits third in the race for the championship, 183 points out of the lead.

“We’re fast – we’re always fast,” McMahan said. “We’ve got a shot of winning every night. Right now we’ve just got to figure out how to be as good as that 15 car right now. We’re close but we’re just a little off right now.”

Kinser said the struggles his team faced early on, set them back as they ran out of time to chase down McMahan and Schatz.

“By that time Donny was already gone and I could still see Paul,” Kinser said. “It was what it is. We kind of got a slow start and we got rolling around here and I was hitting marks. At the end of the day we ended up third with two great teams and two great drivers in front of us.”